Props to The Walking Dead for knowing what interests us as much as fresh meat does walkers: The Season 10 key art released Thursday focuses on its two remaining original cast members, Norman Reedus (Daryl) and Melissa McBride (Carol), as well as the departing Danai Gurira, who’s played Michonne since Season 3.

The stark image — which you can view full-size by clicking on it below — features Daryl double-fisting it with a pair of knives, while Michonne and Carol both reach for their weapons, as if the eagerly-anticipated Whisperers war might begin at any second. When it does, it promises to be a doozy. Since the walker-skin-wearing enemy is led by the bats— crazy Alpha, it poses “a threat unlike any [our heroes] have ever faced,” reads the official logline. “Backed by a massive horde of the dead, it is seemingly a fight they cannot win.”

The conflict is also intensely personal, since Alpha marked her border wall with the severed heads of a bunch of the trio’s friends and loved ones — including Carol’s son, Henry. On hand when the clashes begin will be several new characters: Virgil, a family man separated from his family (played by The Leftovers’ Kevin Carroll); Gamma, an acolyte of Alpha’s (played by Thora Birch of American Beauty fame); and Dante, a roguish Alexandrian (played by Snowfall’s Juan Javier Cardenas). 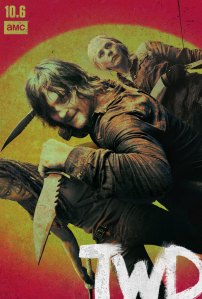 Check out the poster above, then hit the comments. Especially after getting an eyeful of that Season 10 trailer, aren’t you stoked for the AMC drama’s return on Sunday, Oct. 6?