Pose capped off a superb sophomore season with a bit of role reversal — and a triumphant return to the ballroom.

We catch up with a tired-looking Blanca in May 1991, doing nails out of her apartment and nursing a bad cough. Pray Tell drops in to see her — they haven’t seen each other in eight or nine months — and she’s proud of how well her kids are doing… but she’s still alone. Pray Tell invites her back to a ball, even if she’s the only member of House Evangelista, but Blanca hesitates and keeps coughing that nasty cough. Next thing we know, she’s in a hospital bed, sharing her final wishes with Pray Tell. (Angel gets her jewelry and clothes; Damon gets her cookbooks.) He encourages her to keep fighting, but “my whole life’s been a fight,” she tells him. “I need a chance at some peace.”

Pray Tell won’t let her go out like that, though: He brings in Elektra, Angel and Lulu to visit, with Elektra quickly criticizing the hospital’s unflattering fluorescent lights. None of them have been to the balls lately, actually; Elektra says she doesn’t have time for “boring butch queens.” She points out how trans women helped build the ball scene, but male emcees like Pray Tell run everything, always judging from their pedestal on high. So Pray Tell and his fellow emcees huddle and come up with a solution: They’ll walk themselves in the next ball for the first time, and let the women judge them for once. Fair enough, right? 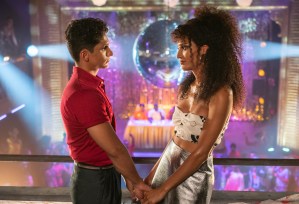 Angel’s got her own problems: She hasn’t booked a modeling job in months, and she finds out that a stylist from a photo shoot recognized her from the balls and outed her as trans. Now the whole fashion industry thinks she’s a “drag queen,” and despite Miss Ford standing up for her, everyone’s pulling her contracts. (“The world isn’t ready yet,” Miss Ford sighs.) When Angel tearfully tells Papi the bad news, he comforts her — and gets an idea. He decides to become a talent manager to help people like Angel break into the mainstream fashion world. The charmer even talks Miss Ford into giving him a cubicle and a phone line at her agency to get started.

Blanca is still battling an infection, but she’s feeling better. (She gets a nice boost from hearing that her nasty landlady Frederica got arrested for arson in connection with torching Blanca’s nail salon.) When she’s ready to go home, Damon’s there to help her into her wheelchair. He’s doing great: dancing professionally in Paris, choreographing music videos and even starting his own French chapter of House Evangelista. He encourages her to get back to being a house mother: “There are so many Damons in the world that need saving.” Meanwhile, Elektra is whipping the male emcees into shape, drilling them on how to walk properly in heels. Pray Tell chafes at her criticism and leaves in a huff, confessing to Ricky that he’s afraid of expressing his femininity since he was bullied so much for it as a kid. But Ricky sweetly encourages him: “It’s time for you to embrace all of you.” 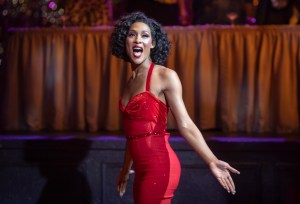 It’s also time for the Mother’s Day ball, and Elektra is crowned Mother of the Year by unanimous vote. Papi tells Angel he just booked her an ad campaign for a German cola, so they’re jetting off to Berlin first-class… and the two lovebirds decide to get engaged! Even Damon and Ricky mend fences after their very heated squabble. But the best news comes when Pray Tell announces that “a very special performer” is on tap: A wheelchair-bound Blanca rolls into the ballroom, lip-syncing to Whitney Houston’s legendary rendition of “The Star-Spangled Banner.” Midway through, she tears off her dowdy clothes to reveal a tight red dress underneath, stepping out of her wheelchair to belt out the final notes. (She wins the grand prize, of course.)

For the closing festivities, Elektra takes the podium as the men take turns walking in heels, with Blanca, Angel and Lulu among the judges. Ricky is a decent enough Janet Jackson, and the other emcees are dressed up like Dreamgirls. Pray Tell goes last, with flowing Diana Ross-like locks, and though he’s timid at first, he eventually finds his groove. He gets all 10s… except a single 9. (“Payback’s a bitch,” the lone dissenting judge informs him.) And outside the ball, Blanca strikes up a conversation with two young teens from the crowd. They’re living on the streets, stealing food to survive — so Blanca offers to take them home for a hot meal. Looks like House Evangelista has found a couple of new members.

Give tonight’s Pose season finale a grade in our poll, and then hit the comments to share your thoughts.