After the big tease that was NCIS: Los Angeles‘ Season 10 finale, JAG‘s Mac and Harm will truly reunite, in person, during the CBS drama’s fall return — and TVLine has your exclusive first look.

In the course of investigating the crisis that closed Season 10, NCIS: LA‘s Callen and Sam met Harmon “Harm” Rabb (played by David James Elliott), now XO of the USS Allegiance. Aboard the ship, Callen and Sam discovered that an embedded NCIS agent had been murdered — and their first suspect was one of multiple Chechen spies among the crew. To draw out other moles, NCIS needed the help of a Russian diplomat. To that end, Hetty called up Lt. Colonel Sarah “Mac” Mackenzie (Catherine Bell), the Marine liaison to the Secretary of State.

Meeting with Hetty, Mac shared that she hasn’t seen Harm in nine years; he passed up a JAG position in London to go with Mac to San Diego, but soon enough “needed to get back in the fight,” Mac said. When an opportunity with the State Department came up, Mac took it, though it meant that their “pretense of a marriage was over.” When the NCIS teams on land and at sea went to compare notes via a video call, Harm was a bit taken aback to see Mac on the screen. “You look great,” he said, after they tended to more urgent matters. Mac in turn smiled, “You haven’t changed. Life at sea suits you.” 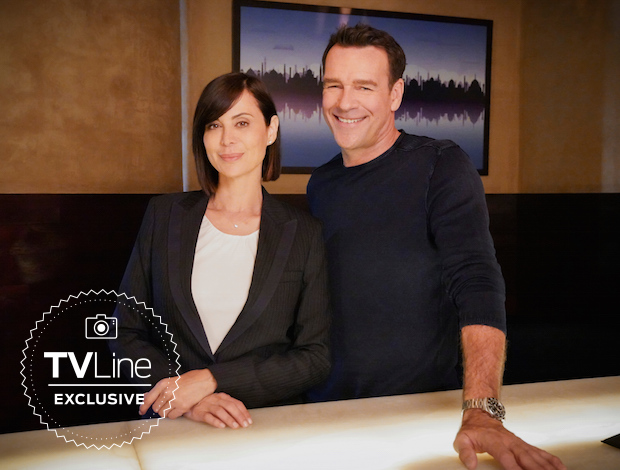 Explaining the decision to establish some distance between Mac and Harm in that finale, NCIS: LA showrunner R. Scott Gemmill told TVLine as part of our Fall Preview Q&A, “These people that we’ve grown to like over 10 seasons, we’re seeing where they are 16 years later, and … things don’t always work out the way you thought.” But as Hetty suggested to Mac, the estranged couple’s “final chapter isn’t written yet.”

Though JAG fans had to settle for that videoconference in May, a more physical reunion is on tap when Season 11 of the CBS drama opens on Sunday, Sept. 29, as seen in the photo above. “Their paths get closer and closer as the story unfolds, until ultimately they’re face to face in the same room again,” Gemmill says. “Now, what happens next?”