This Sunday on HBO’s Succession, the assorted Roys started to come to terms with their world’s new order, in which Kendall is the blackest of sheep, Roman’s star is (theoretically) rising and Shiv is secretly on track for great things. Who this week seized a chance to flex for daddy dearest, and who saw their own career plans be, um, “modified”?

SHIV is, of course, still reeling a bit, having been (super-secretly) anointed by Logan to take over Waystar — in due time, that is. After successfully laying out a counterattack to Stewy’s on-air skewing of their company, Kendall grabs a few alone minutes with LOGAN, she learns that the timetable he has in mind spans multiple years, during which she will take enter a management training program, do a stint at the Hong Kong office, shadow a buncha people…. It’s by no means the instant stardom she had in mind, but Logan seems open to streamlining the transfer of power, some.

Shiv’s husband TOM, meanwhile, licks his chops at the prospect of scrutinizing his new baby, ATN, mostly with an eye on cutting headcount — though the salty lady in charge at the cable news network all but dares him to find anything wrong. Tom tasks GREG with the mission of finding fat to trim, and Greg later reports back with a “digitization” idea that will lop some 50 “skulls,” and which gets Tom slavering. Coming off that high, Tom tells Shiv that he wants book some time with Logan to “make love to him with my ideas,” which forces Shiv to pull them away from a party and come clean about that which she was offered, a week ago, at the summer house. 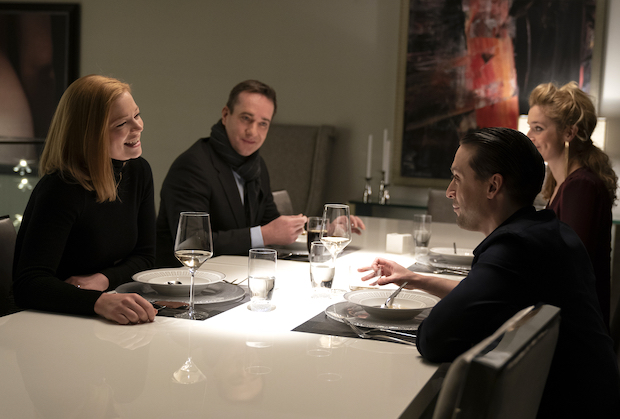 Though he is happy for Shiv to be handed this opportunity she claims she didn’t even want, Tom’s feelings are clearly mixed. After all, the plan was for him to be groomed for the CEO position. It’s the same plan, Shiv contends, just with a (big) “modification.” Plus, once she is at the helm, big things await her husband down the road, later, whenever. Afterward, if there was any doubt about Tom’s take on this news, he airs it out during a dinner with Roman and Tabitha, where one too many jokes about his boxy suits and “agricultural” walk trigger him to tell interject, “Hey, Shiv? F–k off.”

Shiv, of course, must juggle her longterm prospects with both Waystar and as potential White House chief of staff, were Gil to be elected POTUS. But she brusquely eliminates the latter from the mix by chiding Gil in front of Nate, and then boldly mocking the candidate for “selling his soul” to her father.

Elsewhere in the hour, Logan — suspecting they were chiseled by Vaulter — has KENDALL and ROMAN each take a deep dive into the website. The former buries himself in paperwork and data, while the latter takes some of the staffers out for drinks, to loosen some lips. As such, their respective reports back to Dad differ. Kendall says Vaulter is doing fine and still offers value, whereas Roman says the site is junk and, worse, the writers are planning to unionize. Logan sides with Roman and decides to gut the site, then tasks Kendall with seeing that through. Kendall at first confides in Vaulter boss Lawrence that Logan wants to shut them down, but Kendall is trying to keep that from happening. It’d help his cause, though, if he could address the staff and beseech them not to unionize at this time.

But as Lawrence rudely learns not long after, Kendall was just fending off the unionization long enough for Waystar to set up a satellite office for the two verticals they’re holding into (“food and weed”), before announcing coldly to the staff that they are all dismissed. Kendall “celebrates” his successful bit of dirty work, at Dad’s bequest, by throwing a party in the spacious loft he has given to apartment-hunting GREG (even if it means Greg can’t sleep there the first night, because strangers are boffing in his bedroom). The next morning, Kendall’s ruthless treatment of Vaulter is rewarded when Logan invites the prodigal son to “make yourself at home” at the office, much to Roman’s chagrin.

What did you think of Tom’s multi-layered reaction to Shiv’s news? And might Kendall be slowly but surely reclaiming his power, at least in his own, sad eyes?