Good Witch closed out Season 5 on Sunday with a finale that doubled as Bailee Madison‘s last episode. So how did the Hallmark Channel drama mark the bittersweet occasion?

After Grace designed her very own graduation dress with the help of Mrs. Hansen, everyone gathered for the Middleton High commencement. Grace, who was selected as valedictorian, offered her classmates some final words of wisdom. “All we have to do is spread our wings and soar,” she said. “We may not land where we thought we would, or when we thought we would, but we all will land. And we will all find our greatest selves on the journey.”

Later that night, Cassie presented her daughter with a very special graduation gift: a sewing machine, passed down from generation to generation, that was used to make Mom’s wedding dress. Mother and daughter proceeded to exchange hugs, and that was the last we saw of Grace. 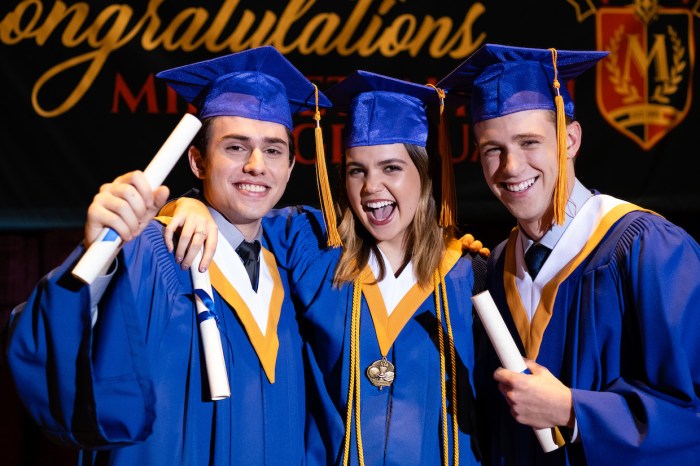 The very last scene jumped ahead three months to find Cassie return home from Wellingsley. She had just left aspiring fashion major Grace, who was eager to begin freshman year. And with Nick having already fled the coop, Cassie and Sam were set to embark upon the next chapter of their lives as empty-nesters.

Madison’s exit was first announced back in July. “So grateful for five amazing seasons with Good Witch [and] the amazing cast and crew which have become like family,” she said at the time. “They say that life is like a beautiful book, and everyone’s story is unique to them. As one chapter ends, a new one begins which is even more exciting and unexpected than the previous one. Grace has been a character whose journey throughout the years has often mirrored my own and this season she is tackling what it’s like to step out of her comfort zone and challenge herself in new ways, looking boldly into the future and all the possibilities before her. I couldn’t be more grateful for the new adventures ahead, and to have you all along with me on the ride as my story continues to be written.”

Good Witch has already been renewed for Season 6, which is set to bow in 2020. In the meantime, grade Madison’s final episode via the following poll, then hit the comments with your reactions.