Hell hath no fury like a woman scorned, the old saying goes. And if you need any evidence of its truth, look no further than the CBS All Access dramedy Why Women Kill, which premiered on Thursday.

The series, which hails from Desperate Housewives creator Marc Cherry, follows three different women across three different time periods, all of whom are dealing with infidelity in their marriages (and all of whom live in the same fabulous Pasadena house). There’s Beth Ann, a ’60s housewife played by Once Upon a Time‘s Ginnifer Goodwin; Simone, an ’80s socialite portrayed by Elementary‘s Lucy Liu; and Taylor, a bisexual lawyer played by The Good Place‘s Kirby Howell-Baptiste.

Before you give us your thoughts on the premiere, let’s recap what happened in each lady’s life during Episode 1:

BETH ANN | It’s 1963, and Beth Ann is the doting wife of Rob, a snobby aerospace engineer played by Parenthood‘s Sam Jaeger. Shortly after moving into their new Pasadena mansion, Beth Ann and Rob meet next-door neighbors Sheila and Leo, who come over for coffee later that afternoon. The gathering is a bit awkward, but pleasant enough at first… until Sheila notices that whenever Rob wants more coffee, he merely looks at Beth Ann and taps his cup knowingly, prompting Beth Ann to immediately refill it for him. Eventually, Sheila speaks up: “If you want more coffee, ask for it. Just tapping on your cup? Come on. That’s how you treat a maid. Not your wife.” 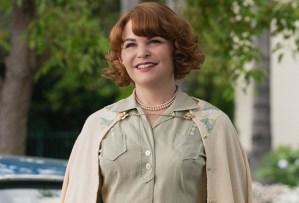 Beth Ann insists that Rob is “such a wonderful provider,” and she considers it “an honor to take care of him.” (Blech.) Sheila apologizes, and the uncomfortable moment passes quickly — but there’s more unpleasantness where that came from. First, when Leo asks Beth Ann and Rob if they have kids, they exchange a sad, meaningful look and say that they don’t. Then, later, Rob reveals that he works in Glendale, not Pasadena — and the moment Leo hears this, he and Sheila suddenly excuse themselves, and it seems they can’t leave the house quickly enough.

The next day, while Beth Ann is at the grocery store, she overhears Sheila talking to a friend in the next aisle over, and she learns why Leo and Sheila skedaddled from the house so fast: Leo has seen Rob hanging out at a diner in Glendale before, and Rob was kissing one of the waitresses there. Beth Ann tries to eavesdrop very subtly, but she ends up toppling a display of Campbell’s soup cans, and Sheila discovers that Beth Ann heard the entire story of her husband’s affair.

At first, when Sheila tries to talk to Beth Ann about Rob’s cheating, Beth Ann denies that it’s happening at all. “He wouldn’t put me through that. Not after what happened to our daughter,” Beth Ann sobs, though she doesn’t give any more details about that tragedy. Instead, she wipes her tears and insists that her marriage is “so very happy,” and Sheila agrees to stick to that story. But that evening, Rob calls Beth Ann from a payphone and lies that he’s meeting a client for a drink, when he’s really paying another visit to Jensen’s Diner in Glendale. Beth Ann decides to go there herself and, sure enough, sees Rob through the window, flirting with and kissing a pretty, blonde server.

Though Beth Ann seems content keeping this news to herself, uninterested in rocking the boat of her marriage, Sheila has a different idea: Why doesn’t Beth Ann go to the diner and confront the waitress? After downing a glass of red wine, Beth Ann decides to do just that — but when she gets to Jensen’s Diner, Rob’s mistress, April, is her server, and Beth Ann immediately starts crying. April, completely oblivious to the context of the situation, gives Beth Ann a tissue, then offers to be the woman’s sounding board during what is obviously a rough day. Though Beth Ann initially seems wary of striking up a friendship with her husband’s side-piece, she ultimately takes April up on the offer… though she does fib that her name is actually Sheila. 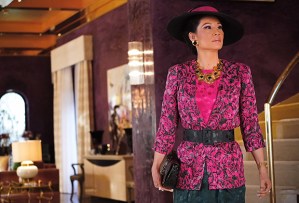 SIMONE | In the ’80s, we catch up with Simone, a thrice-married socialite who will be hosting a party at her swanky pad later that evening. From the outside, at least, Simone’s life looks perfect, including her seemingly happy marriage to Karl (played by Smash‘s Jack Davenport). But not long into that night’s soiree, Simone finds an envelope addressed to her sitting on her dining room table — an envelope that contains a strip of photo booth pictures, in which Karl is kissing a man.

Simone, who looks like she’s just had the wind knocked out of her, confronts Karl during the party, pulling him into a bathroom and showing him the photos. Though Karl is immediately aghast and apologetic, Simone asks if there have been others, and he wordlessly confirms that there have been. That’s when Simone sends him upstairs to pack his things, insisting that he not come back down until all of the party guests have left.

But when Simone comes up to their bedroom later to check on Karl’s packing progress, she finds him slumped in a chair, having swallowed a whole bunch of pills. “You think you’re gonna get out of this by dying? F—k you!” Simone shouts. “I want to see you suffer in a one-bedroom apartment next to the airport, and you will not deny me that pleasure!” (Simone was already my favorite character on this show, but after that line? She’s got a lock on first place for the foreseeable future.) Simone swiftly calls an ambulance for her husband, and when neighbors begin to congregate on the lawn to see the scene unfold, Simone lies that Karl merely fell while going down the stairs, and he’ll be fine.

There is one neighbor who doesn’t buy that story, though: Simone’s friend Wanda, who has apparently long resented Simone for flaunting her money and perfect life while Wanda works through a divorce and drinking problem. “You sure you didn’t push him?” Wanda asks Simone, revealing that she was the one who delivered those photos of Karl’s infidelity. Simone then lunges at her friend, pinning her to the grass until an EMT pulls the women off each other — and Simone nonchalantly chalks up the whole incident to her drunkenness, as you do.

The next day, Simone gets a visit from Tommy, the good-looking teenage son of her friend Naomi. Tommy, who was a waiter at Simone’s party the night before, confesses that he saw the photo booth pictures of Karl before Simone did, but he wasn’t sure what to do about them. Then, when Simone begins to weep about her three failed marriages, Tommy pulls her into a hug… then pulls her into a passionate kiss, which she briefly returns before breaking it off. “How old are you now?!” Simone asks. “Eighteen… in two days,” Tommy admits. Simone then ushers Tommy out of the house — but he has an extremely honest message for her before he leaves: “Just remember, there’s at least one man who’s dying to f—k you.” (This ain’t your parents’ CBS, people!) 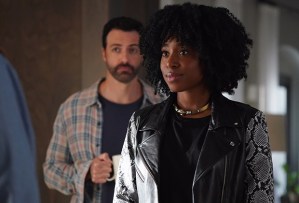 TAYLOR | Taylor’s storyline takes place in 2019, and it’s not quite as cut-and-dry as the others. She and her husband Eli (Veep‘s Reid Scott) are in an open marriage, and they’re allowed to hook up with other people — provided those hook-ups stay very separate from their relationship with one another. There also seems to be some tension in other aspects of their marriage right now: Taylor appears frustrated that Eli, a screenwriter, hasn’t written much or sold a script lately — and when Eli asks if she’s ever resentful of being the breadwinner for the last two years, Taylor gets quiet and doesn’t respond.

Early in the episode, Taylor is forced to break that “no hook-ups in the house” rule, when her current lover, Jade, needs a place to crash due to a stalker-y ex-boyfriend. Eli reluctantly agrees, provided it’s only for a few nights — but when he sees how gorgeous Jade is (played by True Detective‘s Alexandra Daddario), he’s much less opposed to the arrangement. In fact, he kinda loves having her around, considering how much Jade enjoys cleaning and cooking for Eli and Taylor as a way of thanking them.

Eli shares all of this with a friend of his, who is mostly jealous that Eli has a hot houseguest attending to his every need — and, as you might expect, he suggests that Eli get a menage à trois going with Taylor and Jade. Eli’s into that idea, but he’s not sure if Jade’s actually into him… until the next afternoon, when Jade decides to go for a swim while Eli is working on his laptop by the pool. She stands right in front of him as she takes off her tank top and shorts, revealing a teeny bikini, then gushes about a movie that she noticed Eli has a framed poster of on his wall.

When Eli reveals that he wrote said movie, Jade is stunned, and she tells Eli that he’s really special, and he should get used to people fawning over his films. She seals it all with a kiss on the cheek before jumping into the pool, and when Eli goes back into the house, he tells Taylor that Jade is welcome to stay for a few more weeks if she needs to. “Honey, you would do that for me?” a surprised Taylor asks, to which Eli responds, “Hey, you know me. I’m all about being a nice guy.” And he leaves the room, looking mighty satisfied with himself.

OK, your turn! What did you think of Why Women Kill‘s first episode? Grade the premiere in our poll below, then drop a comment with your full reviews!