Syfy’s Krypton ended its battle-heavy Season 2 with a comparatively intimate and yet seismic slugfest, while Nyssa embarked on a daring journey that was… for the birds?

With Zod’s forces primed to attack the New Lurvan base, Jayna and Dev discuss with a freshly awakened Lyta how badly they would be outnumbered in combat — that to even attempt a defense would be a “suicide mission.” Besides, Jayna suggests that even if they ultimately get to Zod, Lyta won’t want to snuff her own child. But upon hearing of his latest acts of treachery, Lyta declares Dru no son of hers!

Lyta suggests that they enlist disenfranchised Sagitari, who will be loyal to her, and in turn dwindle Zod’s ranks. But even if that works, in the wake of the Wegthor conflict, how can they “fake an entire army,” Dev asks. That actually won’t be so great a problem, Jayna interrupts, noting that Seg has returned — alive, to Lyta’s great relief, and with others at his side. Alas, no sooner does the rebels’ plan start to take shape than Zod catches wind of the potential break in his ranks, and puts a stop to it.

Now definitely outgunned, the rebels, led by Jayna and Dev, commit to fending off the enemy best they can while Seg sneaks off to confront Zod at Kandor. And while lasers fly back and forth on the snowy battleground, Seg arrives at Kandor and addresses a crowd, alerting them to Zod’s somatic reconditioning tactics. When Dru arrives and scoffs at the lad’s claims/attempted coup, Lyta shows up to reveal herself to the people and tell the story of the Black Mercy fakeout. She effectively drives home the fact that Zod, their “savior,” used reconditioning to secure their bidding.

Zod orders the interlopers to be arrested, but his commander, processing all of the news, shrugs, “Arrest them yourself!” Seg then steps into the plaza, ready to rumble, echoing the Superman line: “General, would you care to step outside?” As the men begin trading blows, Seg is clearly being bested. Lyta then joins in the fight. She and Seg, pummeling their son in tandem, proves too much for Dru to handle. Seg pins Dru to the ground and slugs him near-senseless. Seg starts to choke his son to death, but Lyta beckons him to hold back. At Seg’s request, the commander orders the ground forces to retreat from New Lurvan.

Now, what to do with Zod…? We realize that the finale’s cold open — in which the general was about to wage war on no less than Earth — was but a fantasy he is enmeshed in, having eventually been “imprisoned” with Black Mercy, by his parents. 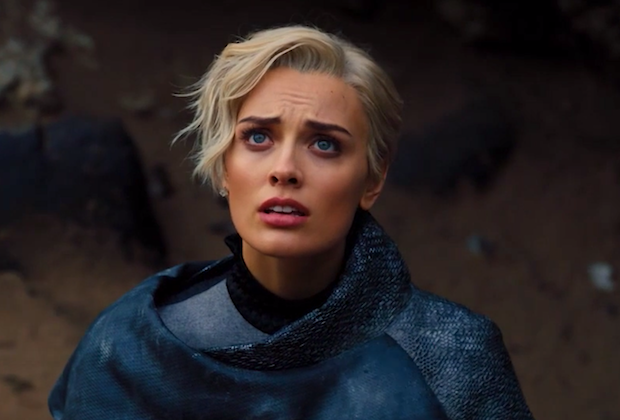 Later, celebrating their big win in New Lurvan, Seg bumps into Lobo, and after much chest puffing on both sides, the frenemies wind up striking a deal: Seg will help find Lobo find Brainiac, if only so he can find his abducted son Jor-El (“Silly name”). Seg also learns that Nyssa has gone “missing,” having stolen Adam’s zeta beam device to travel to planet Rann and find the inventor Sardath (and in turn, track down Brainiac/Jor-El). Exploring where she landed, she finds a mass of charred corpses, and then one scorched humanoid who’s in the process of taking his last breaths. Later, she is aghast to see fly overhead dozens of… hawkpeople? 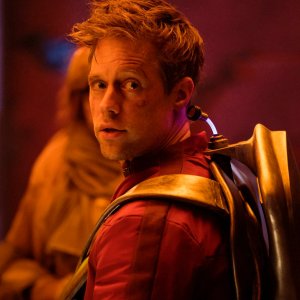 * Having been crushed by rubble in last week’s battle, Adam Strange lost feeling in his legs — but soon enough Val has outfitted him with a handy jetpack that will take some used to operating, at least when indoors!

* While sweeping the perimeter of New Lurvan after the battle, Dev and Jayna discovered Doomsday, encased underground in ice.

* In the very final moments, following Seg and Logo’s chat, we learn what Brainiac is actually up to — taking tiny Jor-El, in his space vessel, on a long journey to… Earth, where the wee one will be “a god among men.”

What did you think about Krypton‘s sophomore finale?