If you’ll excuse the X-Men pun, it was the last stand for David and his friends versus the Shadow King and the Time Eaters in Legion‘s series finale. So did David lose his mind… or finally get it back?

After a quick stroll down memory lane through David’s troubled childhood and adolescence, we catch up with him and his dad Charles in the past, with David showing him the amazing things they’re both capable of. He slowly pulls a glowing sphere out of his ear, which turns into a mace, and then tells his dad, “Your turn.” Charles yanks a glowing bullet out of his ear and loads it into his pistol, and father and son set off to defeat Amahl Farouk once and for all. “I like this… us,” David says to his dad warmly before they enter the fray. 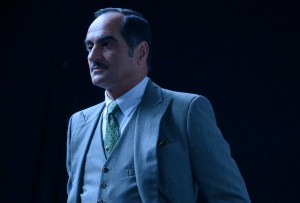 When they arrive, though, they find not one but two Farouks: the past one that was ensnaring Charles, and the modern-day one who’s the “parasite in my skull,” as David puts it. He smashes Old Farouk in the skull with his mace, and they disappear into the astral plane, where a bunch of Davids sprint out of doors and attack Farouk all at once. Meanwhile, Charles fires his pistol at New Farouk, and they vanish into another alternate dimension. But that Farouk simply pulls at the bullet wound and reveals it to be a harmless red scarf, and when Charles pulls out a knife to fight, Farouk scoffs at his lack of imagination. He offers him a drink instead. (How civilized!)

That’s not the only battle going on: Syd and Kerry are still with David’s mom Gabrielle in the past, being chased by those nasty Time Eaters. Cary figures if he and Kerry merge bodies, it’ll confuse their foes — and Gabrielle is awed by the sight. “I see it now,” she marvels. “You’re gods.” (“I wish,” Syd quips.) The merged Kerry is energized, and takes great delight in kicking and slashing at Time Eaters while Syd polishes off a few more with her shotgun. But the fight takes a lot out of Kerry: We can actually see her hair turning gray as the battle rages on.

Old Farouk proves to be too powerful even for a dozen Davids, and David finds himself stuck in a strait jacket, with Farouk taunting him that he’s still just a scared little baby. “I’m a good person,” David insists. “I deserve love.” (“No, you don’t,” Farouk counters.) David cries out in agony and begins singing (!) the Pink Floyd classic “Mother,” with Gabrielle chiming in for a verse. When the song finishes, he summons the strength to finally pull off the strait jacket, which morphs into Farouk, and tell his mortal enemy it’s “time to die.” But his dad and New Farouk are actually getting along quite nicely: Farouk tells him, “I love the boy, Charles. I consider him my son,” and offers him a proposition. Hmmm… 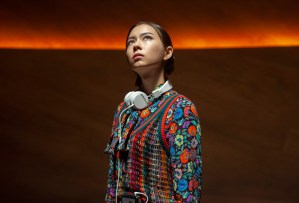 Switch, weary from the rigors of time travel, wakes up to a rattling earthquake (the aftershocks from David’s tussle with Farouk) and zaps off to the time-travel hallway, where she spits out a mouthful of teeth as the Time Eaters close in on her. “I surrender to you,” she tells them. “Bed time is here.” She puts on her headphones, at peace with her decision… but she’s awoken by her father caressing her face. “You have discovered the true meaning of time: an ocean, not a river,” he tells her, and the exhaustion has now totally left her face. She ends up in her old bedroom with her dad, who shows her how to use a whistle to train the Time Eaters like they’re obedient dogs. He wants to introduce her to “existence, untethered” — but she has one more job to do.

She arrives just in time to save Syd and Kerry from the Time Eaters, blowing her whistle to call them off. After offering some cryptically reassuring words to Syd about how she and David will now get a chance to relive their lives over from the start, she disappears again. (Kerry: “What just happened?” Syd: “I think we saved the world.”) And just as David is about to choke the life out of Old Farouk, he’s stopped by Charles and New Farouk. Charles tells his son he’s made a deal with Farouk to respect one another’s existence. (When David asks how they can take him at his word, Charles fires back: “We’re telepaths. We never have to take anyone at their word.”) He apologizes for not being there for David before and pulls him in for a paternal hug. New Farouk gets Old Farouk on board, too, by putting glasses on him and showing him kaleidoscopic visions of David’s entire life that bring a tear to the old villain’s eye.

David and Farouk shake on their newfound truce, Switch heads back off to explore “existence, untethered” with her dad, and an elderly Kerry holds hands with Cary and calls him “brother.” Charles reunites with Gabrielle and vows to stop travelling and spend more time with her and their son. He wants to become a teacher… or a Professor (X), perhaps? Finally, David and Syd gaze at Baby David in his crib, both poised to start new lives… without each other. After she tells her former love to “be a good boy,” they both fade off into the ether, and the Who’s “Happy Jack” — which played in the pilot — plays us off once again.

What’d ya think of the grand finale, Legion fans? Grade it in our poll below, and then hit the comments with your thoughts.