Pose has been flourishing creatively in Season 2, but it’s been doing so without a pair of key characters from Season 1.

In the freshman season of FX’s 1980s LGBTQ drama, Evan Peters and Kate Mara co-starred as married yuppies Stan and Patty, with Stan carrying on an affair with Indya Moore’s Angel. But Angel broke it off with him at season’s end, and Stan and Patty haven’t even been mentioned so far this season. So why did they vanish from Pose‘s narrative?

“I think that Stan, specifically, served a really important purpose, and that was a story that we really wanted to tell,” executive producer Steven Canals tells TVLine. What the writers wanted to explore, he says, is: “What does a relationship between a trans person and a cis gender person look like, and what are the complications of that if one of those people is married and the other person is a survival sex worker?” 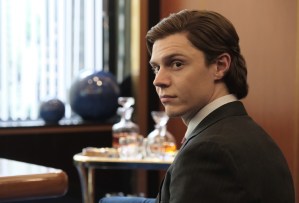 But with Stan and Angel’s breakup in the Season 1 finale, “we positioned Angel as being someone with agency, specifically a trans woman of color with agency,” he explains. “And so to us, it just felt like we didn’t want to take that away from the audience. To suddenly have her run back into a relationship with him would feel like a cheat to us.”

The EP concedes that “narratively, it would have been really interesting” to see Stan and Angel try to rekindle things in Season 2. But “it didn’t make sense to have [Stan] reemerge and to have her still sort of struggling with it, when she so clearly put an end to it.”

Pose fans, are you glad we haven’t seen Stan and Patty in Season 2, or do you kind of miss having Evan Peters and Kate Mara around? Drop your thoughts in a comment below.