Pose began telling a new love story this week… but there wasn’t a lot of love to be found at the Evangelista family dinner table, was there?

Tuesday’s episode saw Pray Tell give in to Ricky’s advances, and the two began a passionate (and romantic) affair. But the news of that — and Ricky’s HIV-positive diagnosis — hit Damon hard, and he blurted out the truth at family dinner, while also revealing Angel and Papi’s cocaine use. The ensuing argument got ugly, opening up old wounds and resulting in hurt feelings that still haven’t healed. In the end, Angel found a new place to live, and an angry Damon moved out, too — leaving Blanca at home alone, without her kids by her side.

This rift in the Evangelista family is a “very serious” one, executive producer Steven Canals (who wrote and directed tonight’s episode) tells TVLine. Unlike most Pose episodes, he points out, this one “didn’t end on a high note.” Instead, it ends “on this really stark image of Blanca being in that space that we’re so used to seeing our family come together… and there she is alone, with no family. And that was intentional.” It won’t get resolved anytime soon, either: “You’ll see the ripple effects of tonight’s episode last through the remainder of this season, and certainly going into Season 3 as well.”

The ripple effects will hit Blanca the hardest, Canals hints, with Season 2’s remaining episodes asking, “What is that next phase of motherhood for Blanca now, going into Season 3?… How does she deal with being an empty nester? How do you pick up the pieces? How do you move forward?” For two seasons now, Blanca has been defined by her selfless dedication to her kids, and “there’s this expectation that women give, give, give, give, give, especially if you’re a mom. So how do you now redefine who you are, when the thing that you’ve been using to define yourself is no longer there?” 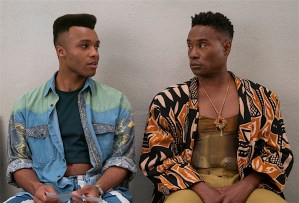 Pray Tell and Ricky’s relationship, with its sizable age gap, isn’t something we’ve seen often on TV — and Canals says the Pose writers wanted to change that. “We had a lot of conversations in our writers’ room around queer love and the different versions of it,” he recalls, and they decided they wanted to explore “intergenerational love amongst LGBT people, just because we’ve never really seen it explored in a nuanced way.” Usually, when we do see this kind of relationship, “it’s the older man who’s pursuing the younger man, and obviously that isn’t the case” here, he adds. “For us, exploring two gay black men who are [HIV] positive, who are in a loving relationship, was really, really important for us.”

The two also shared a very intimate sex scene this week — one that was “really just a couple sentences” in the original script, Canals reveals. But “I kept coming back to what I would’ve wanted to see when I was a young person.” He had an image in his mind of “these two men, post-coital, completely naked, just holding one another. And there’s something about that image that to me was so beautiful, and I couldn’t get it out of my head. So that’s ultimately what I captured.”

Drop your thoughts on tonight’s pivotal Pose — and Season 2 so far — in a comment below.