Animal Kingdom handed Shawn Hatosy a doozy of an episode for his second directorial effort. In Tuesday’s “Julia,” an action-packed hour that Pope’s portrayer framed with a sly, painterly artfulness, Deran schemed to get Adrian out of the country while he still had a pulse, Frankie approached J with a job, and after dragging Angela to a Nar-Anon meeting, Pope heard from her own lips that she’d been playing him since she showed up at the Codys’. The confession stung like hell, yet Pope was still grateful, because “nobody tells me the truth.” He also realized how big a lie J had told by saying that he hadn’t seen Angela the day he’d actually set her up to score, and informed his nephew, “When Smurf’s gone, so are you.” 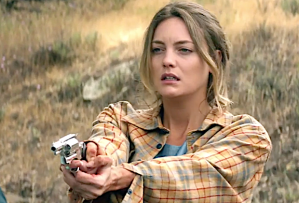 Meanwhile, in the 1970s, when Janine and Colin weren’t busy robbing diners with the very-pregnant mom-to-be playing the role of the terrified hostage, they were dreaming of playing house — in the very home in which Smurf now lived. She even facilitated a truce between Colin and Manny so that they could hit an armored truck. All in all, things were going great for Bonnie and Clyde… until a cop pegged them as the diner thieves and Colin was killed in the ensuing shootout. Afterwards, rather than let herself be dumped by Manny and Jake, Janine stole their car and turned to Jed for help disposing of both the body and the vehicle. See what I mean? It was a lot. Luckily, Hatosy was willing to break down for TVLine not only how he set in motion the twists and turns but their significance moving forward.

TVLINE | Over and over again, I was really impressed with your framing, like the way you shot Deran and Adrian in the mirror, and the way you positioned Manny behind Colin and Janine when they were talking about the job…
Thanks. When we did the stuff with Manny, there was so much tension around this thing that happened [between the three of them] which we don’t really tell the story of, because six months have gone by between episodes 10 and 11, and the only reason we know that is because Janine has quite the belly! So I just figured when he showed up, they’re having this parental argument, and he’s sort of like hiding in the doorway, not sure if he should be listening… that sort of awkward feeling of being the cast-aside child.

TVLINE | I also loved how you framed that Pope/Angela/J shot in the kitchen so specifically so that it was this big “Holy s—!” moment when we realized 1970s Janine was in the house that would eventually be hers.
And that is our house! We did the 1977 stuff first, and our production designer completely turned our set into the 1977 version of that house. She did an amazing job. They even covered the pool with sod in the backyard. Anyway, we did one shot with Janine where she was sort of leaning over and pointing through that counter space, and I knew that later, when Pope was in there, we had to match that shot because, without being too on the nose about it, I wanted the audience to know that it was the same house. I’m glad you picked up on that! 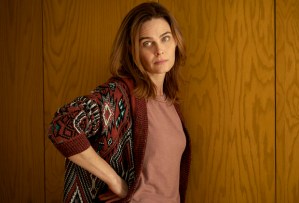 TVLINE | Angela’s confession felt like a big turning point for her and Pope. On one hand, she was honest; on the other, she admitted that she had played him. So is this a step forward for them or ultimately a lateral move?
Pope and Angela is complicated, particularly for Pope, but also for fans on the outside. I think they’re like, “Why is he letting her manipulate him?” And we kind of get to the answer in this episode. Angela is the ghost of Julia. He blew it [with his twin sister], so in his own twisted way, it’s his effort to try and right that ship. And she has a command over him similar to what Smurf does. Which is clearly something Pope needs in his life.

TVLINE | She’s probably the only gentle touch or kind word he’s had since Amy.
And he craves that normalcy. That’s always been the theme for Pope — being accepted for who he is. But the heartbeat of 411, to me, is the love story between Janine and Colin.

TVLINE | How ironic is it that you got to direct Pope’s father’s death?
I know, right? And look, I’m a fan of the show. So for me, the Smurf origin story is like discovering hidden treasure every week. In 411, I am struck by her ability to show Colin love, because we’ve never seen that side of Smurf. So it’s clear that these two were soulmates. And identifying why is the key to unlocking the emotion of the episode. That was my big job. And it’s kinda weird, talking about Pope. It’s very similar to what he always wants: He just wants to be accepted as normal. So you take Janine. She’s a badass, she wants to rob banks and kick ass, and here comes this dude, and sure, he’s got some hang-ups, but he’s like, “Okay, so you wanna be a gangster and you wanna raise a family? Sure, you can do that.” He’s the only one who lets Janine just be who she is without judgment, and it’s beautiful.

TVLINE | In its own twisty way, yeah. I know, obviously, you can’t say what happens, but would you say that Pope really has it in him to throw out Julia’s son?
He doesn’t give a lot of people second chances. And J really blew it with the Chronic Dread Fest robbery. He’s making a lot of mistakes, actually. I think people want J to be the leader, but that’s a huge mistake. There are so many rules that he breaks. And Pope sort of lays it on the line with J and gives him a pretty concrete boundary that he steps over with Angela, with the lies. So I think the future’s looking pretty bleak for J and Pope.

TVLINE | Let’s talk about that last shot of Deran looking at the pool at Smurf’s house. You intended to give us the feeling that maybe he wasn’t only going away with Adrian till he got settled, right?
Well, I think the stakes are as high as they’ve ever been for those two. There are rules in the Cody family, and once people are talking to cops, that’s it. We saw what happened in Season 1 with Catherine and Pope. There’s only one way out for Adrian if he stays, and the question becomes, what is Deran going to do? So for me, I see it as a new chapter. There’s a sense of it being over. And I loved the transition from Janine in ’77 at Jed’s compound and these guys in the present-day getting ready to do a job there. The scenes sort of go very naturally together with that Timbre Timbre song [“Run From Me”], which I hoped we would get the rights to. So I was very happy with the way it came out.

What did you think of “Julia”? Will Pope really kick J out? Is Deran leaving Oceanside with Adrian for good? Hit the comments.