“Feels like the end almost,” said Tulip at the beginning of Preacher’s fourth and final season premiere. And right she was. Though Sunday’s “Masada” and “The Last Supper” were every bit as violent and wacky as any other episodes — as a fan would hope, even demand — it definitely seemed like the series was working up to something. But what? Read on, and we’ll go over the clues, zany and inscrutable as they may be. 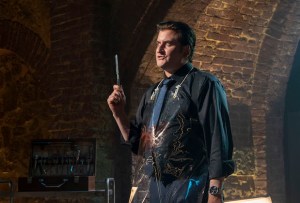 ‘I REALLY LOVE WHAT LORD FRANKENSTEIN’S DONE WITH THE PLACE’ | After a prologue in which a newly-blond Cassidy and Tulip fell into bed and Jesse fell — well, more likely was pushed — out of a plane, we flashed back to a coupla months earlier. At Masada — “the Grail’s command center for over 2,000 years,” per Featherstone — Cassidy was used by torture instructor Frankie Toscani to demonstrate how repeated circumcisions were more effective at inflicting pain on a vampire than mere gunshots. Thankfully, help was on the way. Or at least it was on its way to being on the way. At the nearby Holy Bar & Grail Motel bar, Jesse used Genesis to recruit a bunch of Grail operatives to assist in his and Tulip’s attempt to save their pal. From there, we briefly — mega briefly — cut away to The Saint and Eugene, who had tracked Jesse to Angelville. So I suppose you could say they were lukewarm on the trail.

Back at Masada, Herr Starr felt so well-prepared for Jesse’s arrival — what with himself and his operatives all having been outfitted with noise-cancelling headphones, and a deaf, dumb old lady (his words) on hand to relay the preacher’s remarks — that he allowed his nemesis to stroll right in. And he was quick to turn down Jesse’s offer to fix the urethra on his noggin in exchange for Cass’ freedom. “You’re here,” Herr Starr explained, “to have a giant vagina carved into your head!” Of course, that didn’t happen since Herr Starr’s guards were the operatives from the bar who’d been Genesis-ized. When they opened fire, Herr Starr lost an ear, and Jesse got himself an escort to Cass, beat the crap out of Frankie and his students, and released his buddy, who wasn’t nearly as grateful as one might expect that his pecker was being spared any further Ginsu-ing. 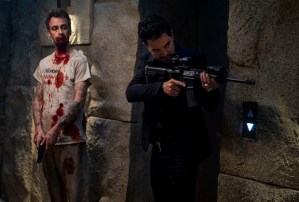 ‘MY FORESKINS CAN NEVER REPAY YOU’ | En route to the exit that Tulip and her crew of Genesis-ized Grail operatives were supposed to keep open, Jesse and Cass bickered, as they often have, like an old married couple. Cass was peeved by most everything, from Jesse’s love of playing the hero to the fact that he hadn’t brought any Percocet. “Why would anyone bring a bloody torture victim painkillers?” Cass snarked. Outside, Tulip’s cover was blown, and though she managed to dispatch all of the guards, the door still slammed shut — ew! Right on Tammy, her most helpful assistant. Luckily, despite being basically bisected, Tammy lived long enough to tell Tulip that there was a switch to open the door at the mountaintop. Which wasn’t ideal, but what the hell? Tulip would just free-solo it.

When the badass reached her destination, she found — who else? Featherstone. The two of them shot at each other so perfectly that their bullets collided, then they threw one another around a bit until, finally, Tulip sent her archenemy hurtling off the side of the mountain… only to discover that her suit could basically transform her into a flying squirrel! By the time Tulip finally got the door open, Jesse and Cass’ argument had gotten more serious. In other words, Tulip’s name had come up. “We’re not gonna talk about her ever again,” Jesse ordered. “Not one more word.” And, since Cass suddenly refused to leave, their never again discussing the woman they both loved seemed like a distinct possibility. 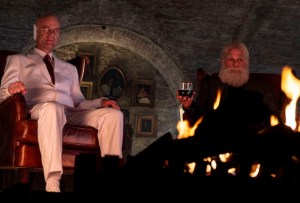 ‘BIG THINGS ARE COMING FOR YOU’ | As “Masada” drew to a close, Jesse and Tulip, back at the Holy Bar & Grail, couldn’t believe that Cass had stayed behind. “Does he know I’m here?” she asked. “Did he ask about me?” Both of which seemed like terrible things to say to a jealous boyfriend. In response, Jesse inquired whether Tulip had slept with the vampire — he wouldn’t be mad if she had, he swore. Still, she lied that she hadn’t. So the following day, they’d return to Masada and drag Cass out whether he liked it or not. At least that was the plan. But overnight, Jesse had an apocalyptic dream that included him receiving a call from his father (“Time to find God, son”) and choking Herr Starr… who then turned into Tulip. “No more dreaming,” she said in a voice that was not her own. “This is your wake-up call.”

Afterwards, Jesse left a letter for Tulip and took off hitchhiking to (no doubt literally) God knows where. As Cass was returned to his cell, Tulip eyeballed her Grail disguise in the motel closet (and c’mon, had to wonder whether hers could turn her into a glider like Featherstone’s did). Finally, Herr Starr offered a diet Dr. Pepper to God, who called it “one of my greatest creations,” and grumbled about having had to let Jesse leave with a pulse. “You wanted to make him suffer, yes?” said the Almighty. “So let’s make him… suffer.” From there, we jumped to “The Last Supper,” which started with a flashback to God watching his latest creation — a brontosaurus, if I’m not mistaken — take a s— and then, erm, eat it. “You were tested,” the Lord cried, “and you have failed!” So He destroyed all of the dinosaurs. 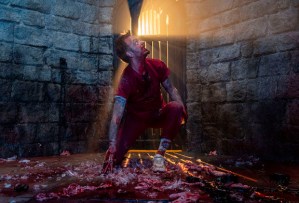 ‘PUT DOWN THE BEER AND GRAB SOME KLEENEX, YOU BABIES’ | While hitching a ride with a porn star/chicken farmer, Jesse admitted that he only had the vaguest idea of where he was headed for his confab with God. All he really knew was that it was gonna take place atop a mountain that looked like a penis. (On this show? Of course it was!) They parted ways when he stopped to help a little boy crying at the side of the road… who it turned out was, as Chicken Lady predicted, a thief. At Masada, Frankie asked Cass why he hadn’t gotten while the getting was good. “You know us Irish,” the vamp replied. “Never miss an opportunity to miss an opportunity.” But he was still trying to escape. His new plan just involved him chewing off his ankle to get free of his chain. Tulip was still trying to spring him, too. However, even firing a bazooka at the front door didn’t so much as dent the thing!

As Cass went on an all-you-can-eat tour of Masada, Featherstone, her bloodlust increasing by the minute, it seemed, pursued Tulip to the Holy Bar & Grail. Luckily for her, Kumal the barkeep didn’t reveal that she was hiding out there. Meanwhile, Jesse made tracks by the hardest, first with an ill-fated fellow on an also ill-fated camel. At a meeting with Grail bigwigs, Herr Starr lied that Humperdoo was safe and sound, when of course, with so many clones running around, he had no idea which Messiah was the real one. When a delegate questioned Herr Starr, Featherstone put him in a box with a grenade. “Someone please,” he cried before exploding, “erase my search history.” Bonkers. This show is so, so bonkers! As the smoke cleared, Herr Starr told the shaken survivors that “the Holy Child will be revealed soon enough.” Needless to say, there were no further questions. 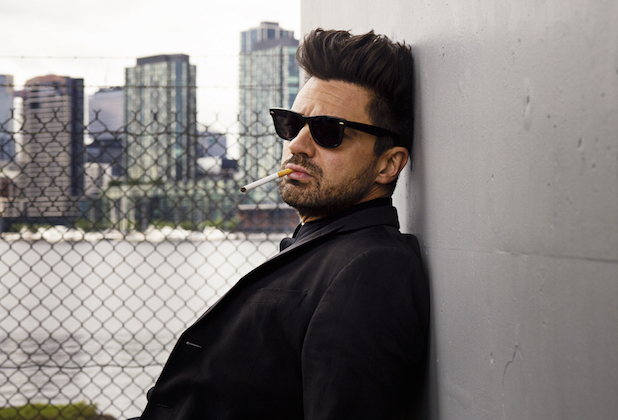 ‘MIND THE TIP’ | After stealing a Grail doctor’s clothes, Cass made it back to the exit, where the door was opened for him without incident. Alas, the sun was so bright outside that he couldn’t exit stage left. Soon enough, he was back in Frankie’s custody. Back at the bar, Kumal warned Tulip over and over again that he had a bad feeling about the mission she was undertaking. Nonetheless, “I don’t wait and see s— for anybody,” she said. Later, he phoned Featherstone to plead with her not to hurt Tulip. Mm-hmm, because that sounds like something Featherstone would totally consider. He needn’t have worried, though. When she and her Grail flunkies came after Tulip, our heroine eluded them with ease. At the airport, Jesse learned from a pilot that the rock he was looking for was an ancient sacred site in Australia called The Lost Apostle. Jesse also remembered that he left his lighter in Chicken Lady’s truck, meaning he had to pay a visit to her at De Sade House of Entertainment.

There, Jesse retrieved his lighter without incident. But before he could leave with the pilot as his Lyft driver, they spotted a little boy in the clutches of the pornsters. As they entered the house of ill repute to play hero, Herr Starr — sporting a new ear apparently made from parts of Cass’ pecker? — observed on a monitor. Back in the desert, those injured during Tulip’s one-woman demolition derby were taken to Masada by Grail medics. Among the patients: Ha! Tulip in her Grail disguise. Kumal had actually been driving Tulip’s car, Tulip had been driving a stolen Grailmobile! Brilliant! As Part 2 of the premiere drew to a close, it appeared that Jesse had actually boarded a plane to Australia… with Cassidy on it. Only Cass was just a figment of his pal’s imagination, a manifestation of his guilt over leaving the vamp and Tulip behind. Finally, we saw God enjoying his favorite beverage while contemplating a bunch of figurines significant to Jesse’s journey thus far.

So, what did you think? Were you pleased that the flash-forward paired Tulip and Cassidy? Are you more psyched that the new season has begun or bummed that it’s the last? Grade the premiere in the poll below, then comment away.