Disney Channel’s Descendants saga reached its epic conclusion on Friday, rewarding its heroes and villains — and everyone in between! — with the happy endings they deserve.

Before you weigh in, let’s recap: Descendants 3 begins with Mal, Evie, Carlos and Jay returning home to announce which four villain kids will join them at Auradon Prep. Promoted as “VK Day,” it’s a very big deal, complete with its own musical number. And given how boring life is on the Isle of the Lost, it’s fair to assume these kids have been doing nothing but rehearsing this choreography for months. It’s tight.

The lucky four turn out to be Dizzy, the daughter of Cinderella’s stepsister Drizella; Celia, the daughter of Dr. Facilier; and Squeaky and Squirmy, the twin offspring of Captain Hook’s first mate Smee. They’re all very excited about being accepted, as are the countless other children who apparently wasted months rehearsing “Good to be Bad” for nothing — some of whom are literally ripped from their beds in order to join this flash mob. (Hey, there’s always next VK Day, right?) 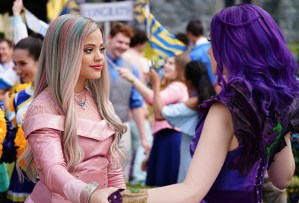 Back in the land of magic and privilege, King Ben proposes to Mal, giving everyone in Auradon something to celebrate. Well, almost everyone. Princess Audrey, who was presumably M.I.A. from Descendants 2 because she was busy dying her hair every color of the rainbow, isn’t the least bit thrilled. Nor is her grandmother. And neither of them is even pretending to embrace their future queen.

This puts Audrey at a crossroads: She can either move on from Ben — and, you know, maybe take down a few of the hundred photos she still has of him in her bedroom — or she can channel all of her rage into an empowering R&B jam, then steal the queen’s crown and Maleficent’s scepter from the museum. The heartbroken royal chooses the second option (shocker!) and declares war on Ben’s bride-to-be.

To make matters worse, Hades (Mal’s father!) nearly follows the four new VKs through the barrier, sending all of Auradon into a panic. (I’m starting to think that Ben’s people only have two modes: celebration and panic. Nothing in between.) Mal suggests closing the barrier forever to ensure the kingdom’s safety, and while Ben is initially skeptical of her plan, she convinces him that it’s the only option.

Upon discovering that Audrey stole the crown and scepter, the VKs return to the Isle of the Lost to retrieve Hades’ ember, the only object powerful enough to counter Maleficent’s magic. Following a rocky reunion, Mal and her estranged father eventually work out their differences — in song, naturally — but she barely has the ember in her possession for five minutes before it’s snatched up by Uma and her pirate pals. 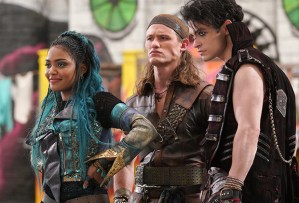 Uma agrees to lend a hand (and perhaps a few tentacles) in defeating Audrey, but only if Mal promises that she’ll drop the barrier for good — a promise she knows she shouldn’t make… yet she does… and it comes back to bite her. When Mal eventually admits that the VK program has already been shut down, the pretty little liar is left completely alone; Celia even adds insult to injury by extinguishing Hades’ ember.

Fortunately, this is still a Disney movie, so all it takes is a powerful ballad about love and friendship to convince Mal’s allies — those who haven’t already been turned to stone, of course — that she deserves a second chance. With Uma’s help, she uses the ember to go full dragon eleganza and stop Audrey’s wicked scheme(s). But when Mal is unable to revive Audrey after their battle, she’s forced to summon Hades, the only person capable of tapping into his ember’s power.

In the end, Mal realizes that morality isn’t as simple as she once thought; good people are capable of doing bad things, just as villains are occasionally prone to heroics. She decides that she can’t just rule over Audradon, but the Isle of the Lost as well, prompting the Fairy Godmother to drop the barrier once and for all.

And they all live happily ever after: Mal and Ben are engaged, Carlos and Jane (aka “Jarlos”) become official, Evie and Doug validate their romance via true love’s kiss, and Jay and Gil decide to take their bromance on a world tour. Things might even be looking up for Audrey, who shares a flirty exchange with Harry — after he’s rejected by Uma, of course — during the movie’s closing number. 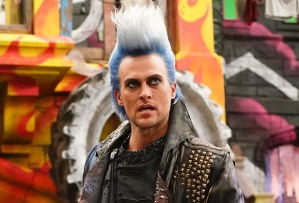 In fact, the only thing we don’t get to see is a dramatic reunion between estranged exes Hades and Maleficent. (But maybe that’s for the best?)

Time to weigh in: Was Descendants 3 everything you hoped it would be? Did the characters’ stories wrap up the way you wanted? Grade the movie below, then drop a comment with your full review.