With the closing moments of its two-hour Season 6 finale, Marvel’s Agents of S.H.I.E.L.D. set the stage for a quite different-looking farewell run, while also revealing how a dispatched-with familiar face will somehow stick around. TVLine spoke with the showrunners about what those two bombshells mean for the past… er, future?

But first, to “succinctly” recap the two-hour finale:

While Izel inhabited Flint (who had been summoned from Mack and Yo-Yo’s minds) and used his power to reconstruct the three monoliths, Deke and his grandparents distributed possession-proof slap bracelets as well as shrike-killing bullets to the team. And just in time, because with the monoliths in place, Izel commanded the shrike to “bring me an army.” Sensing that Izel can hear their communications, the SHIELD team went dark, but the question became: How do they get past her to save Mack and Yo-Yo? Deke sheepishly approached Nana and Bobo with a possible solution, in the form of a portable jump drive that he built off (of course) stolen tech — though it will need some tweaking, seeing as most  of the test mice died! The family that fine-tunes tech together alas doesn’t stay together. A quarrel between FItz and Deke leads the latter to wonder what he has to do to get any respect, after which he straps on the device and “jumps” away, landing inside the temple. With Izel busy “singing,” Deke slaps bracelets onto Mack, Yo-Yo and an injured Flint. Mack and Yo-Yo then carry Flint to Zephyr One, while Deke struggles to “jump” away, hampered by an unexpected recharge period.

May meanwhile had been hoping that after unleashing his power to vanquish Izel, Sarge could retain the bit of Coulson inside him, to stay behind with the team. Sarge, though, coldly counseled her to abandon any hope of getting the love of her life back in some form. Breaching the temple just as the monoliths vibrate into fluid and “wash” open the gateway to Izel’s world, Sarge chokes, hoists up and throws down the lady demon. And yet he can’t bring himself to slay her with the special sword. Sarge explains to May that he feels a pain in his heart, which she suggests is love. “I was afraid of it, too, but you let me feel it,” she tells Faux Coulson. “You gave that gift to me.” When May urges Sarge to “remember” her, he acknowledges that yes, the pain he feels probably IS love — “and I know how to end it,” by slicing it out of him! He then runs through May with the sword, then lobs her and it into the gateway!

Elsewhere at the close of Hour 1, Enoch gets a visit from Isaiah, who has bad news to share — all other Chronicoms, himself included, have been reassigned — from anthropologists to hunters!

The second half of the finale thus found S.H.I.E.L.D. fending off multiple threats — hordes of shrike “zombies” as well as Chronicom hunters — on multiple fronts. Swarmed by the former after making his way to the Quinnjet, Deke needed Mack to guide him over the radio on how to fly the jet and then (not-so-gently) dock it on the Zephyr. Yo-Yo, meanwhile, used a new (Flashtime?) skill to gun down three zombies in slow motion, but then was blindsided by a shrike that flew into her mouth.

Elsewhere, FitzSimmons realized that the hunters know their every move because they had accessed their minds via the Chronicom tech. After sending others to the one place they only recently learned of — Deke’s secret workshop — they hid out where the last Framework tech was kep, and rigged the place with explosives. Realizing that with no remote detonation, they knew they’d have to sacrifice their lives in the name of blowing up a bunch of baddies/the greater good, but as they prepare to do so, the hunters get blasted away by… Isaiah?… who is actually Enoch wearing a “skin.” Enoch tells his friends that he has another bold plan, one that will demand “the hardest thing you’ve ever done” and “change the natural course of your lives forever.” That is all. 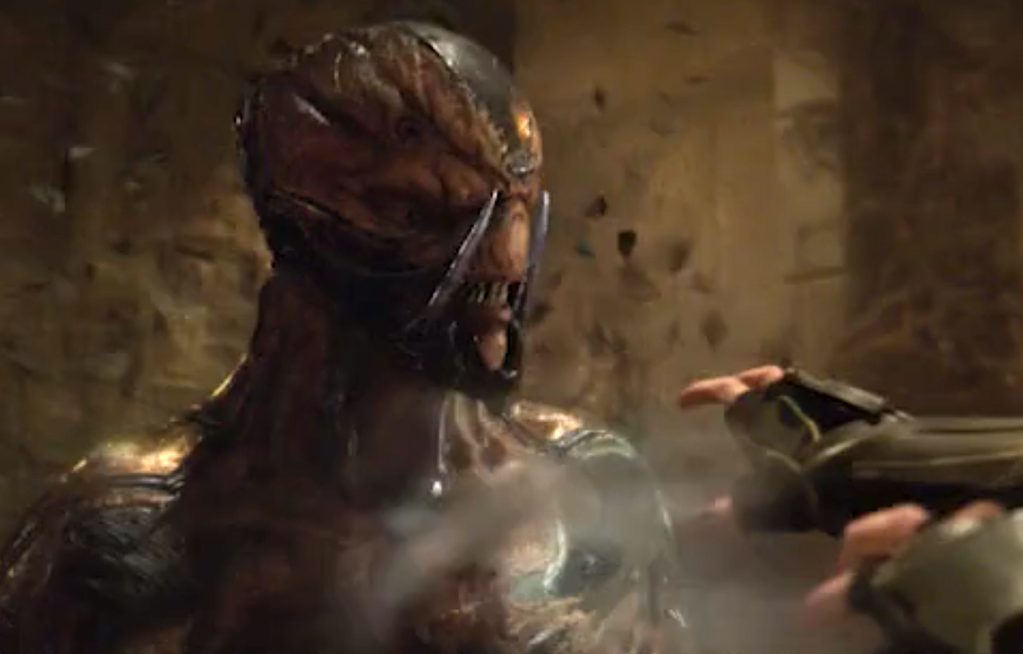 Inside the temple, Izel reports to Sarge that the “sign has been sent” to the other side of the gateway, where we see three robed figures, each wearing a totem corresponding to a monolith. But just as the figures go to use the totems to unlock a door that would set loose countless incorporeal souls, May — who has come to and painlessly extricated the sword from her — sneaks up behind them. Moments later, the three totems get tossed through the gateway, landing at a horrified Izel’s feet. Izel passes through to the other side, where she finds a sword-wielding May waiting go to mano a mano. As the ladies clash blades, Daisy, Mack and a worse-for-the-wear Yo-Yo on the other side arrive to do battle with Sarge. when Daisy quakes Sarge, his Coulson “skin” is peeled away, revealing his true, Predator-like form. Sarge reassembles and KO’s daisy for a bit, then gets into fisticuffs with Mack — all as Yo-Yo starts to “turn.” Daisy comes to and takes another crack at Sarge, unaware that Izel is sneaking up on her from the gateway door. A blade then suddenly juts through Izel’s body, plunged by May revealed to be standing behind her. (“You’re singing a different tune, now, aren’t you?“) With Izel vanquished, Yo-Yo is saved from turning. Daisy then quakes Sarge again, while Mack grabs a sword and slices Sarge in half, Snoke-style. May collapses to the ground, her sword wound again mortal on this side of the gateway. But just as she gets ready to truly reunite with Phil… some really crazy stuff happens. 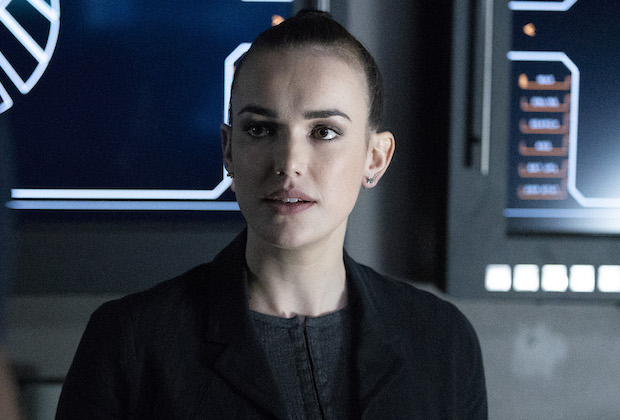 Lights clack on from above, and we see Simmons, in a sleek topknot, emerge from a jet and promptly inject May with something that will save her. “Where’s Fitz” the team asks. “I don’t know,’ Jemma answers. “I can’t know.” Aboard the plane, she explains the Chronicom hunters’ plan to occupy Earth/establish Chronyca-3, after destroying SHIELD and everyone in it. Already, they’ve lost the Lighthouse. Using coordinates transmitted by Fitz, the Zephyr “jumps” away before the Chronicoms strike and blow up the temple next. But to where did Fitz send them? The question is actually, “To when,” as we see the Zephyr peek through the clouds and lay eyes on a New York City where the Empire State Building not only looms largest, but is just finishing construction. Daisy needs a drink, but suspects Prohibition will keep her from having one. “Like I said — we had time,” Jemma reiterates.

Jemma then drops the biggest bombshell, explaining that with the Chronicom hunters in possession of, among other resources, Fury’s “black box,” they needed someone who truly knows S.H.I.E.L.D. So, through a merging of Chronicom tech and archival data, they have created sort of “the ultimate LMD” — in the form of a suit-and-tie wearing Coulson! “Hey, guys…,” he smiles upon being booted up. And off we go to the seventh and final season! 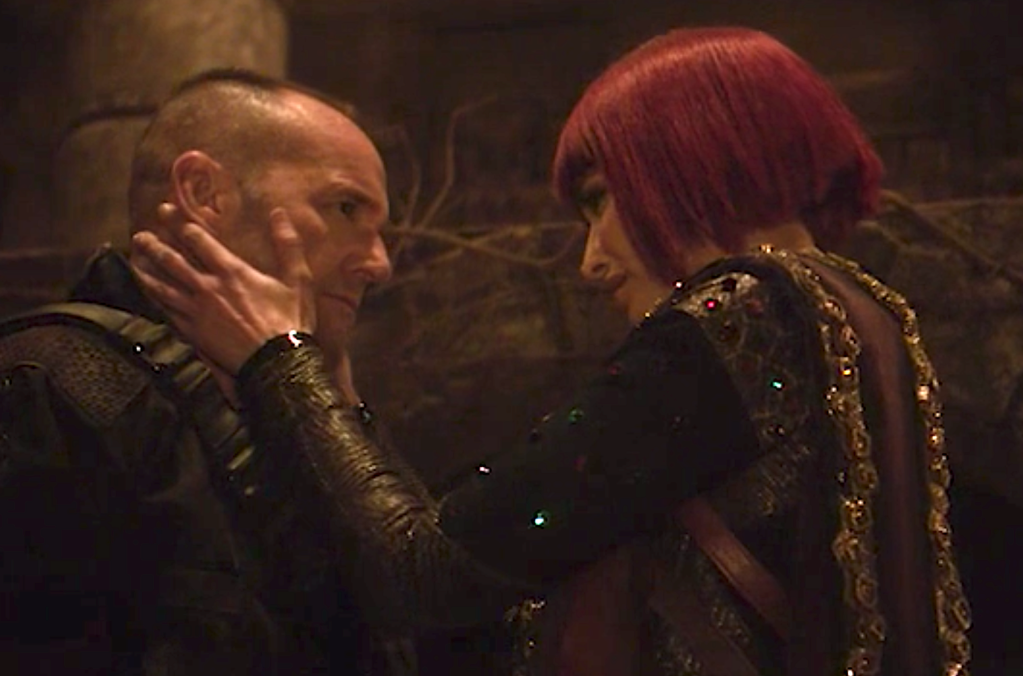 After screening the season finale, TVLine asked famously tight-lipped co-showrunners Jed Whedon, Maurissa Tancharoen and Jeff Bell about what we just saw, and what might lie ahead during the final season.

TVLINE | Which was the trickier “Coulson” to resurrect? The way you brought Clark Gregg back for Season 6, or the way you found to keep him around for season 7?
JED WHEDON | You mean, the one that was created through a strange occurrence on another planet with three monoliths that created him through time and space, and with only the memories of a distant fog of his friends… or the one who was a robot? Yes, the robot was easier.
JEFF BELL | After the emotional end of Season 5, we didn’t feel like we could reboot him immediately as LMD Coulson. That’d be a terrible cheat. So we had a season of Sarge, whom we really enjoyed, and which also reminded us how much we love Coulson. When we had this new “Coulson 2.0,” I think we all went “Yea!” inside. We’re also curious about how he’s different from the Coulson we knew before.

TVLINE | How hard was it to come up with Sarge? Because his origin was a little messy, a little complicated. Did you have to ask yourself, “At what point in our past might Coulson have duplicated himself?”
WHEDON | We had to find a way to make it work, to create a new version of him—
BELL | So we MacGyver’d him together. We went through the house and we Mythbuster’d him, using the pieces we had in the garage.

TVLINE | Did you have the luxury of breaking both Season 6 and 7 at the same time? I know Season 6 came as a surprise….
BELL | [We learned about Season 7] about halfway through Season 6.
WHEDON | We did know we had a 7 when we were ending 6, and that allowed us to do that cliffhanger.

TVLINE | So at the point in Season 6 when it’s established that Izel destroyed the Chronicoms’ home world, you weren’t necessarily planting the seed for Season 7.
MAURISSA TANCHAROEN | Perhaps at that point we did…. There’s a point in time when we did know.
BELL | Because we write scripts ahead, we’re ahead of production, so a lot of times we’ll go, “Oh, that’s what this meant in 610.” If we’re four scripts ahead, we can always throw a line in and sharpen a point.

TVLINE | Talk about the decision to add some flair to Daisy and Yo-Yo’s powers this season.
WHEDON | One of the things that’s hard about people with powers is you can’t always have theme using them, or the story would be over right away, so we’re always finding ways to limit them or change it up. That’s the puzzle, to keep it interesting and new.

TVLINE | Turning to the final act of the finale: When Jemma says, “I can’t know” [where Fitz is], that is because of the fact that the Chronicom hunters know their minds?
TANCHAROEN | That’s very astute!

TVLINE | Why bring us to the 1930s versus the ’40s? Because doesn’t that well predate the creation of S.H.I.E.L.D.?
WHEDON | That’s a good question.
BELL | An excellent Season 7 question.
WHEDON | Also, there’s the cool hats.
TANCHAROEN | We like the clothes, we like the cars….
WHEDON | The bootleggers….

TVLINE | Before I did the math, my first, excited thought was that they could cross paths with Agent Peggy Carter. But when realized it’s a decade too soon…. Maybe they could run into a teenage Peggy or something?
WHEDON | We wish you were in the writers room, so we could have done that!

TVLINE | What do you want to say about the mission for Season 7, led by Jemma in her sleek topknot?
WHEDON | It’s to preserve the history that we’ve grown to know and love on our show. It’s a way for us to look back at everything we’ve done and talk about the history of S.H.I.E.L.D. as we bring the show to its final chapter.

TVLINE | Is that by design, to bring things full circle in a way?
WHEDON | That is thematically right on the button, sir.

TVLINE | Will the Chronicom threat be given a specific new face, or is it someone we already met?
WHEDON | It will receive a new face, yes.

TVLINE | You just wrapped filming the final season. Is there any chance for one final MCU nod on your way out the door?
WHEDON | There will be one tiny little MCU nod.
TANCHAROEN | “Tiny”…? OK….
WHEDON | Just a nod! Just a nod.