Chuck Lorre‘s latest CBS series is a rom-com, yes. But it is first and foremost something more important.

Debuting Monday, Sept. 23 at 8:30/7:30c (leading out of The Neighborhood), Bob Hearts Abishola is described on CBS’ press site as “a love story about a middle-aged compression sock businessman from Detroit (Mike & Molly’s Billy Gardell) who unexpectedly falls for his cardiac nurse, a Nigerian immigrant (Transparent‘s Folake Olowofoyeku), while recovering from a heart attack.” And while that clearly sets the stage for a Will They/Won’t They scenario (a la Leonard/Penny?), “The story I want to tell is about the greatness of first-generation immigrants,” Lorre said on Thursday at the Television Critics Association summer press tour.

“Immigrants make America great” is the new show’s premise, Lorre continued, moments before producing and donning a custom “IMAG” hat. “People come here and work their asses off. That’s a story worth telling…. We’re all the children/grandchildren/great grandchildren of immigrants.” 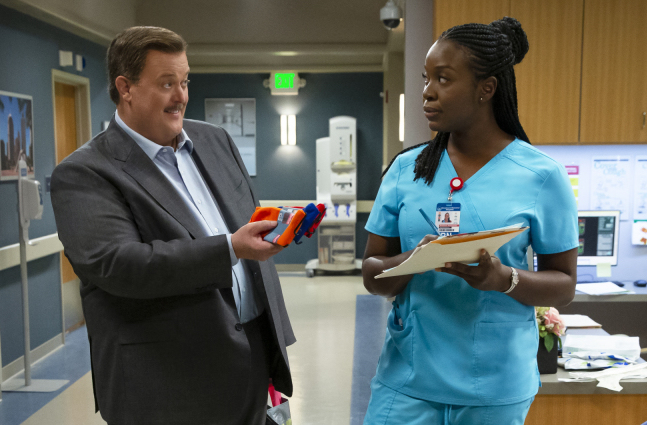 That said, and even though Bob’s clumsy attempted courtship of Abishola “will take a very long time to play out,” Lorre asserted, “It’s not a political show, there’s no reason to view it as politics. It’s about people.”

Bob Hearts Abishola takes more than a few cues from producer/writer Gina Yashere, who also recurs as a character named Kemi. Yashere shared at TCA that her parents are Nigerians who immigrated to England, where she was later born. And though her parents hailed from well-to-do backgrounds, “that didn’t matter” as they sought a new life in a new country. “They had to start from scratch and work their way up,” all in the name of creating opportunities for their children

As such, especially when depicting Abishola and her home life (Barry Henley, Shola Adewusi and Travis Wolfe Jr. play her family), “A lot of the stories are in the show are basically from my life,” Yashere added.