After a rocky season (to say the least), The Bachelorette‘s Hannah faced her toughest decision yet on Tuesday’s season finale… but that wasn’t the end of the story. By a long shot.

The finale opens with Chris Harrison teasing a “shocking” conclusion that involves “the massive, destructive forces of lies and betrayal” (!) and a surprise twist he describes as “cringeworthy.” (Buckle up!) Back in Greece, Hannah is still struggling with her decision, while her beaus Tyler C. and Jed star in the now-standard product placement for Neil Lane engagement rings. (Hey Jed, maybe you can write a jingle for these, too!) The guys get suited up as Hannah tells us this is “the hardest decision of my life” — before ordering the production van to stop and getting out mid-ride, tripping over her heels and sitting down right in the middle of a Grecian street with a skinned elbow. “I really can’t do this,” she tells the poor producer whose job it is to just get her out of the damn street. 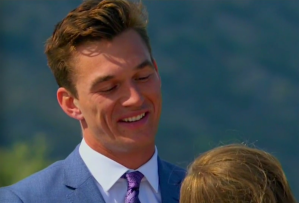 Hannah pulls herself together, though, and arrives at the final rose ceremony, with Tyler C. and Jed (who brought his guitar!) en route. Tyler C. is first out of the car — which, of course, is the Bachelor death sentence. He launches into a romantic spiel before she stops him cold: “I love someone else,” she confesses through tears. Tyler, ever the gentleman, says he’ll still be her “biggest fan” and wishes her and Jed the best… but we can see he’s just shattered. In the car ride back, he’s shellshocked: “I thought this was it.” (Well, stay tuned, buddy. Maybe it still is!)

That means Jed is receiving Hannah’s final rose, and they seem happy enough when she tells him she’s “been praying for” a man like him and says yes to his marriage proposal. (Yes, he plays her a song on his guitar. And we have to listen to the whole thing.) But we’re way too early in this two-hour show for this to be a simple happy ending, right? Well, about that… “unfortunately, that’s not where this story ends,” Chris Harrison cautions, adding that “Jed is about to face the music.” (Wordplay!) Hannah narrates that she and Jed were madly in love… at first. (She’s talking in the past tense a lot here, you’ll notice.) You may know all of this already if you follow the gossip blogs, but it seems that Jed had a girlfriend that he broke up with right before the show — or maybe didn’t even break up with her at all? Hannah says this is “not OK” and Jed not being truthful about this “really muddied the waters” of their relationship. 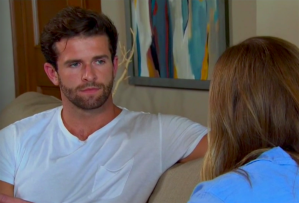 “I love the person I got engaged to,” she says, before adding: “I don’t know how I feel about this person.” So she meets Jed in L.A. for “a really important conversation,” where she confronts him about the rumors. He says he was “very single” when he met this girl and “it never felt like a relationship to me.” But they did spend a weekend at a cabin together, and she did meet his parents, and they did go on a vacation to the Bahamas together — but she wasn’t his girlfriend, right? He admits he told this girl he was only going on The Bachelorette “for a music thing” — and told her he loved her, too. Hannah says he was “selfish, to everyone,” but Jed defends himself with: “To me, I ended it in my heart… but not verbally.” Hannah is just embarrassed, and pulls out more photos of more girls he’s been seen with — since they’ve been engaged!

Jed goes into damage-control mode, wondering what he can do to make it better, but Hannah just says: “I don’t know… I feel ill.” She eventually decides she needs “one hundred percent honesty,” and still doesn’t feel like she’s getting it from him. He was scared that if he told her the truth from the start, she would’ve dumped him… which, yeah! She’s also hurt that he told his friends at home that he “won” — not that he fell in love and got engaged — and feels like “this experience has been taken away from me” by his dishonesty. Her decisions are now “tainted,” and that engagement ring “doesn’t mean the same thing,” she says — before she takes it off and puts it on the table. 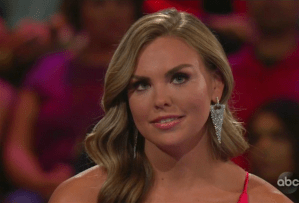 The unhappy couple joins Chris Harrison for a live debrief, with Hannah coming out first and getting a rousing ovation from a supportive crowd. She reveals that Jed first told her about the other girl the day after they got engaged (!), and then she learned later he wasn’t being even close to honest with her. She’s “sobbed on the floor” over all of this, and also “been mad as hell,” and then says the magic words: “I am not with Jed anymore. The engagement is over.” Jed comes out to a weak smattering of applause and grovels for Hannah’s forgiveness, admitting he “wasn’t the best I could be.” (Ya think?) She gracefully accepts his apology and hopes he can learn from this and become a better man someday — for some other woman, of course, not her.

Jed admits he’s still in love with Hannah, but she says her love for him ended “when you broke that trust.” So with that door shut firmly, Chris Harrison maybe tries to open up another one by bringing out Tyler C. for a chat with Hannah. (Dirty pool… but I like it!) “I’ve been really grieving that relationship,” Hannah confesses before he comes out to rapturous, lusty applause. They look giddy together as Tyler raves about how “powerful” and “strong” Hannah has been through all of this: “She’ll bounce back, I’m sure.” Will she bounce back with him, though? She says her feelings for him “didn’t just go away,” and giggles as she says: “You’e an incredible guy, and I’m a single girl.” She invites him out for a drink, and he quickly says yes: “Just say when.” Chris Harrison speaks for everyone when he says: “We can ship this.”

Alright, Bachelor Nation, it’s your turn: Who should Hannah have chosen? And do you think she and Tyler C. will really give it another shot? Vote in our poll, and then hit the comments to share your post-finale thoughts.