With Lisa Vanderpump conspicuously absent, the Real Housewives of Beverly Hills took out their frustrations on a defensive Camille in Part 3 of the reunion… not that she didn’t deserve it.

We pick up with Camille storming off the set, practically ripping her dress off to get rid of her mic. She sobs to Andy backstage about how “nasty” all the ladies are being towards her, including Denise, with Andy pointing out, “Well, you just said you didn’t like her, and she’s boring.” (Camille doubles down on the “boring” part, by the way.) The other ladies are bewildered; Kyle says she’s like “Season 1 Camille, times ten.” (Which, if you remember Season 1 Camille, is really saying something!) Camille eventually comes back and shares how “really hurt” she was by what they said about her wedding. But when Teddi reminds her of all the terrible things Camille’s said about her, Camille sniffs that she has “a lot going on” in her life, so she can’t be expected to remember every little insult she dishes out. OK, then! 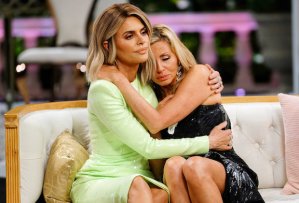 Andy needles Camille about why she doesn’t like Denise, and brings up her impassioned defense of Supreme Court justice Brett Kavanaugh. (Ooh, RHOBH gets political!) We seem to reach some common ground with Camille and Denise when we learn both of their homes were damaged in the recent California wildfires… until Camille scoffed that Denise wouldn’t understand her pain because her “rented house” (gasp!) wasn’t fully destroyed by the blaze. Camille, to her credit, has “no answer” for saying such awful things, and collapses into sobs, with Lisa Rinna hugging and comforting her. (Man, when Lisa Rinna is the model of stable maturity, things have obviously gone off the rails.)

Camille finally gets a breather, but we’re in the home stretch of the reunion at this point, and Andy is clearly grasping for topics. We look back on all the fabulous vacations the ladies took on Bravo’s dime, with private jets and French chateaus. (Kyle had a $10,000 Rolex delivered to her at dinner by Postmates?? What do you tip on something like that?) I did enjoy Erika insisting that she regularly buys her own groceries: “The know me at Vons.” Yeah, let me see that club card and then I’ll believe you, Miss Jayne. 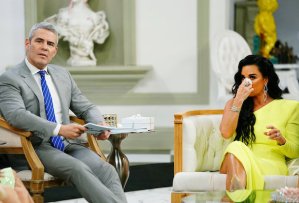 But we can’t go very long without hammering Lisa Vanderpump, can we? Andy shows footage of her ridiculous lie detector test, and the ladies collectively roll their eyes. Kyle insists she did a practice run on the polygraph before the test we saw on TV — “so when the cameras showed up, she’d have a great performance,” Erika theorizes. Radar’s top editor even chimed in to confirm that LVP wasn’t the source for Radar’s Dorit stories… but that just means LVP and that Radar editor are close friends, Kyle insists! So basically, everything Vanderpump does is bad and evil and wrong. Got it.

We then get a loooooong montage of Kyle and Lisa’s friendship, from the giggly highs to the screeching lows we witnessed this season. Kyle tears up watching it, saying it’s “sad” to see where they are now — but she doesn’t seem eager to apologize and mend fences, either. Andy (rather rudely) opens Kyle’s birthday gift for Lisa: a hot pink belt from Manolo Blahnik. It is, as they all agree, very LVP. They wrap things up — finally! — by taking a round of tequila shots… and after quickly downing hers, Lisa Rinna takes Erika’s and downs that, too! Drunk Rinna forever! See ya next season, everyone!

Got thoughts on tonight’s RHOBH reunion? Drop ’em in a comment below.