Turning a universally beloved British romantic comedy into a TV series centered on a cast of American characters… piece of (wedding) cake, right?

Hulu’s new adaptation of Four Weddings and a Funeral — premiering this Wednesday on the streamer — has some huge shoes to fill, and executive producer Tracey Wigfield (an Emmy winner for her work on 30 Rock) admits to being “a little nervous” when she first signed on. After rewatching the original 1994 Hugh Grant/Andie MacDowell film, Wigfield remembers thinking, “‘Why are we even doing this? This feels like a death mission!'” But rather than try to remake a classic, Hulu’s Four Weddings strikes out on its own with an original tale of four American friends reuniting in London for a wedding… and, well, eventually three more. Along with a funeral. 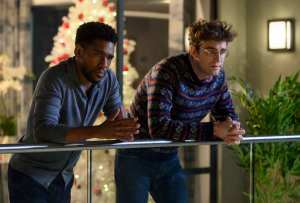 Yes, the title remains the same, but the Hulu version is “a whole new, reimagined thing,” star Nathalie Emmanuel (Game of Thrones) promises. (She plays speechwriter Maya, who’s embroiled in an affair with her politician boss.) The show does feature a few sly nods to the film and other Richard Curtis-penned comedies like Love, Actually and Notting Hill, but Wigfield tells TVLine she and co-creators Mindy Kaling and Matt Warburton knew their show had to “be a thing that would be satisfying and enjoyable to watch in its own right, even if you’ve never watched the movie.”

The result is a loving homage to Curtis’ brand of “elevated rom-coms,” as Wigfield puts it, with a carefully balanced blend of comedy and drama. In fact, the writers’ room included a number of drama writers to make sure the tone was right. (“People would tell stories and cry all the time,” Wigfield recalls. “I’m just used to a bunch of weird Harvard guys who are like robots saying jokes.”) Hulu’s Four Weddings is also a throwback to traditional romantic comedies, without the layers of snark and irony that seem to be required these days. “Can we just stop rolling our eyes at everything and just do something that feels authentic and hopeful and nice?” Wigfield asks. “There are nice love stories to tell that are still interesting and rife with conflict that don’t have to be so f–king grim.” 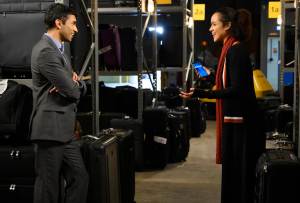 One of those nice love stories: Maya and investment banker Kash (Nikesh Patel), who have a classic meet-cute in Heathrow Airport when he helps her find her lost luggage. “It’s supposed to be a chance encounter that you think you’re never going to see again,” Patel says, “and what they both end up doing is kind of being really open to each other, and saying stuff they’d never say to anyone else.” But they do see each other again… when Maya’s best friend Ainsley (The Mindy Project‘s Rebecca Rittenhouse) introduces Kash as her boyfriend.

The Maya/Kash storyline is “the driving force throughout the season,” Wigfield reveals, adding that “it’s kind of this undeniable thing that they are sort of weighing… If it really is true love, what should you be willing to risk?” Four Weddings goes beyond mere romance, though, and touches on friendship and career struggles as well. It captures “the difficulty and the challenges of hitting your 30s and that sense of finding who or what makes you happy,” Patel notes. (Kash, for instance, rediscovers a love of acting that he’d long since buried.) The characters are all, in their own way, “going, ‘OK, so I’ve been doing stuff that hasn’t worked for me. Let me be bold and try something else.'”

So what else can we expect — beyond four weddings and a funeral, of course? There’s one wedding, Patel teases, “where I was like, ‘I don’t think I’ve seen this in a big mainstream show before.’ So that was really exciting.” The romantic entanglements might surprise you, Wigfield adds: “Part of the fun of it is not knowing who ends up with who. The people who sort of seem like they’re headed for each other… things sort of take left turns in the end.” And those left turns come with real emotional consequences, Emmanuel hints: “As well-intentioned as people can be, they just mess up… basically, the s–t hits the fan.”