As Animal Kingdom’s Smurf drew ever closer to the end of the line Tuesday, she decided to throw one last killer party… that she wouldn’t realize until it was just about to begin was going to cast her as the killer. Whose death warrant was signed by the conclusion of “Exit Stragedy”? Read on and find out…

‘IF YOU DON’T WANT THIS, TELL ME’ | The episode started in the 1970s, where Janine’s morning sickness was revealed to the gang only moments after they’d hit a bank. Manny later suggested to Colin that a pretty, tough girl like Janine would be fine if they ditched her. So, you know, “just say the word.” But that was the last thing that Colin seemed to want. Off his talk with their ringleader, he reassured Smurf that he wasn’t his father any more than she was her mother. Meaning? “It means we can do this however we want.” In the present, Smurf laid out her job prospect for the boys, leaving out the part about Jed being Pope’s uncle and altogether ignoring questions about her condition. Afterwards, J privately asked Pope what would happen after Smurf was gone. When his mother had died, he’d called 911, then he’d called Smurf, he told his uncle. “I got no one left to call.”

Certainly, Olivia wasn’t an option. She’d had her father’s P.I. do a little digging and now knew all about J and the den of thieves in which he resided. But she wouldn’t go to the cops, she told him, if he logged into her school account and did her homework so that she could maintain her 3.0 GPA (and continue collecting the $10k/month that went with it). Instead of being blackmailed by this amateur, J reported her to the professor. When, predictably, she hit the roof, he scared her into silence by all but hissing, “People like you make me sick, with your trust funds and your gated communities… You’re too rich and too dumb to know when you’re in over your head.” It was mean, sure, but it beat the hell outta the Mia treatment! “Forget you ever knew me,” he said. And unless Olivia was even stupider than J thought, it appeared that she would. 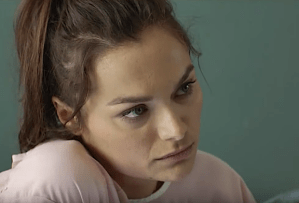 ‘THERE IS NO WAY TO FIX THIS’ | While Pope slipped into head-of-the-family mode with Deran — and seemed more comfortable in the role than we might have expected — Adrian learned from his public defender that he was looking at 15 years and a $250k fine. Later, Deran tried again to say that he was going to handle it, but Adrian was past the point of believing that. He was just incredulous that the Codys had spent their entire lives ripping people off, and he was going away for 15 years over one bad call. (Hmm… would he flip on Deran? I wondered… till it soon became clear that he wasn’t going to live long enough to get a chance to. Keep reading… ) At the hospital, Renn was so desperate to get rid of her mother, Candice (Switched at Birth alum Constance Marie), that she asked Craig to take Mom out for a bite. “Dude, are you serious?” he asked. Was she ever.

Over coffee, Candice told Craig that she planned to adopt the baby. His and Renn’s lifestyles weren’t really conducive to childrearing, after all. But Craig had already gotten attached to the tot, whom Renn now wanted to name Reef (which was at least better than Crest). So he reminded Candice that the first time Renn got high, it was with coke from her mom’s purse… and that she’d once slept on the beach for a week after her stepfather had tried to get into the shower with her… In the end, Candice fixed him with a “This ain’t over” look and stalked off. When Renn thanked him for getting rid of her, he promised to make sure everything was right at the house when she came home with Reef… sorry, Nick. (By the hour’s end, Renn had decided to name the boy after her uncle.) And Craig really did appear to be ready to make some changes. When Deran scoffed at the idea of him as a dad — he could imagine the kid crawling around, licking up an 8-ball off his brother’s floor — Craig decided to lay off the drugs. 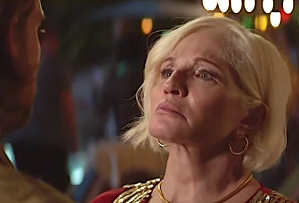 ‘CAN YOU IMAGINE ME RAISING A KID?’ | While all that was going on, Pope looked high and low for Angela, and learned that she hadn’t shown up at or even called in to work. Soon enough, his search led him to Angela and Julia’s old dealer, who reported that yeah, he’d sold to her. (Until a customer came by, it looked a whole lot like the guy was about to get a Pope smackdown, too, for selling Julia the drugs that had killed her.) Just before Smurf’s party got underway, Detective Andre came by. “I have a name,” he told her ominously. As the rager kicked into high gear, Craig revealed to Smurf that Renn had had his son, and made her blanch by reminding her that that meant “you’re gonna be a grandma again.” When Angela rolled in, lying that she’d slept at a friend’s, then gone to work, Pope totally Hulked out, violently searching her for track marks and leftover drugs, then locking her in a closet to detox.

Nearby, Smurf seemed to be setting the stage for family drama post-mortem by telling J, “You’re much smarter than your uncles, aren’t ya, baby? You’re gonna need to be when the time comes.” Pretty sure he already knew that one, Janine. She then approached Deran. “Let’s go smoke that joint behind your ear,” she said. But their conversation was going to leave him the opposite of high. First, she asked how long he’d known Adrian was talking to the feds, then she told him — yikes — “Handle it, or I’ll have to turn it over to Pope.” I repeat: Yikes! After sealing Adrian’s fate, Smurf strolled back to the party and gave him a Judas kiss so casually that I was once again convinced that she was gonna live. Even hell wouldn’t take a viper as vicious as Smurf! So, what did you think of “Exit Strategy”? Anyone else predict a custody battle between Craig/Renn and her mom? Do you think Deran would — could — kill Adrian? Hit the comments.