Blake Carrington will have a new bride-to-be when Dynasty returns to The CW for its third season. Daniella Alonso is joining the show as Cristal Jennings, TVLine has learned exclusively, stepping in for Ana Brenda Contreras, who originated the role in Season 2.

“Unfortunately, Ana Brenda Contreras will not be returning for the third season of Dynasty due to personal reasons,” executive producer/showrunner Josh Reims tells TVLine. “We’d like to thank her for her contributions to the show and wish her all the best. We’re excited to welcome Daniella Alonso who will step into the role of Cristal.”

This swap is the latest in a series of major casting changes for Dynasty during the course of its two-season run. Nathalie Kelley, who played Cristal Flores, was killed off between Seasons 1 and 2; James Mackay, who plays Steven Carrington, transitioned from series regular to recurring in Season 2; and Nicollette Sheridan, who portrayed family matriarch Alexis Carrington, exited midway through Season 2. (Elizabeth Gillies briefly stepped into the role of Alexis via the magic of plastic surgery, but a new actress is expected to play her in the future.) 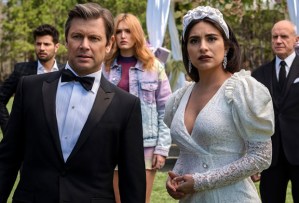 When last we saw Cristal, her wedding to Blake was being interrupted by the grim discovery of two yet-unidentified corpses, one of which is believed to be a friend of Fallon’s who died at Carrington Manor when the girls were still in high school. (Sloppy work there, Anders!)

Dynasty‘s third season premieres Friday, Oct. 11 at 9/8c. Your thoughts on Alonso joining the show as its new Cristal? Drop ’em in a comment below.