Warning: The following contains spoilers from Season 7 of Orange Is the New Black. Read no farther until you have finished Episode 5.

For Orange Is the New Black‘s Diane Guerrero, the topic of immigration is deeply personal.

Before she became known as Litchfield inmate Maritza Ramos, Guerrero, a U.S. citizen, was the daughter of undocumented immigrant parents. One day, she returned home from school to discover that her mother and father had been arrested and detained. They were ultimately deported to Colombia.

At the time, Guerrero was just 14 years old.

Thanks to the generosity of family friends, who agreed to take her in upon her parents’ expulsion, Guerrero was able to remain in the country and pursue higher education. She chronicled her experience in the 2016 memoir, In the Country We Love: My Family Divided, as well as a 2018 follow-up geared toward children.

“When I was on my book tour, I met many different people who were going through similar things in such intense ways, especially young people who were feeling so uncertain about their futures,” Guerrero tells TVLine. “They’re like, ‘Damn, somebody can come right now and take my parents away.’ Or ‘Someone can come take me out of class, and tell me that I’m a criminal for being here when I’ve been here my entire life.’ …It made me see how important it is to tell these stories.” 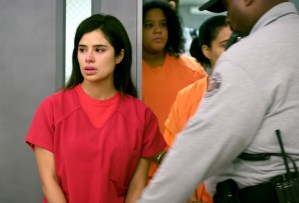 Maritza faces a vastly different fate than her portrayer in Orange‘s farewell season. In Episode 2, the parolee gets swept up during an Immigration and Customs Enforcement raid at a downtown Brooklyn nightclub,. She is brought to PolyCon’s Litchfield-adjacent detainment center, where she is soon reunited with her BFF, Flaca. Flaca manages to get in touch with Maritza’s estranged mother, Maria, in hopes that she’ll be able to send along Maritza’s birth certificate and prove that her daughter belongs in this country. But Maria is unable to comply. As it turns out, Maritza was born in Colombia and is not a U.S. citizen, despite what she’d been told as a child.

“I knew that the stories that we told were going to be different from mine, which I was happy about, because there are so many different stories to tell,” Guerrero says. “There are people who came here when they were kids and didn’t know that they were undocumented,” like Maritza. Then there are “people that come into this country later in life, or even people with criminal records who had been arrested for maybe a misdemeanor,” which in immigration court may be classified as grounds for inadmissibility. 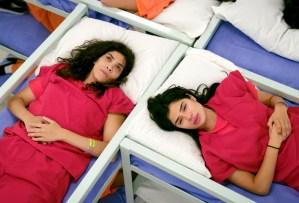 In addition to Maritza, much of the focus this season is on Laura Gómez’s Blanca Flores, who has her permanent resident status revoked because she agreed to confess to her part in Season 5’s prison riot, in exchange for a shorter sentence. Then there’s Karina Arroyave’s Diana Cardóva, an El Salvadorian migrant who is detained not long after losing her husband, leaving her two small children behind.

“I knew we had really smart people working on this,” Guerrero says. “The writers did a lot of research, by actually going into detainment centers and seeing for themselves what was going on, to attending court hearings where they were having children on the stand. So all of these [storylines] really inform what is happening. I felt they did it justice.”

Unfortunately for Maritza, justice is not served. She gets caught giving an immigration attorney hotline number to her fellow detainees, and is deported to Colombia at the end of Episode 5. We watch as she’s led onto a plane by an armed I.C.E. guard, then fades away with all the other women on board.

“I loved Maritza before, but watching her grow into someone who is deeply empathetic, it was nice to see her make that decision,” Guerrero says of her character’s fate. “When she’s sitting on that plane, it’s heartbreaking, but it’s what actually happens — a moment where you feel so alone, when you don’t know what the future holds, and then that’s it. That person is gone and we don’t hear from them. Leaving it at that place, that place of uncertainty, is what a lot of people are experiencing right now.

“We are seeing the situation worsen. We’re seeing more people suffer,” she continues. “It just shows you that we need to come together. We need to get people in Washington who are going to fight for human rights. And I’m just glad that Orange is on the right side of history.”