Everything is different the second time around. Just ask Piper Chapman.

Orange Is the New Black‘s final season picks up a short time after Piper’s release. She’s on probation and living with Cal and Neri in their Jackson Heights apartment. To support herself, Piper works at a Thai restaurant, Thunder Thais, which is somehow still in business despite a window display of dead flies.

Piper’s barely scraping by on her meager income. Because she was let out on early release, she’s responsible for probationary fees. As a result, she has no money for rent, let alone enough to buy a bus ticket to go and see Alex. As a last resort, she turns to her father, who’s been ignoring her calls following her release. She confronts him at his place of work, and he can barely bring himself to look her in the eye. He’s unwilling to support her financially, but he offers her a mere $50 to get up to Litchfield. 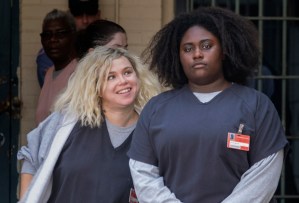 Back in prison, Alex is approached by Badison. She wants Alex to add her brother to her visitation list, and in turn, give up her visitation time with Piper. To get Badison off her back, Alex calls on Lorna to help plant a contraband phone in Badison’s bunk. Taystee intercepts the phone before a C.O. finds it, but Badison can’t leave well enough alone. Rather than show Taystee a token of her appreciation, she taunts her bunkmate and gets a whooping. Both of them are sent to solitary confinement.

Afterwards, Hellman confronts Alex. He has $1,500 worth of heroin to unload, and demands that she deal for him until Badison is back in Gen Pop. Meanwhile, over in D-Block, Daya and Daddy face new competition. Out in the yard, the twosome get scooped by Annalisa, who has started dealing her own supply. Daddy suggests they need to make an example out of Annalisa, at which point Daya suggests that they “kill this bitch.” Daddy tells her to take it easy. “Fear is what we’re going for,” she says. “Fear gets everybody back in line.” But fear isn’t what she has in mind. Eventually, Daya catches Daddy going down on Annalisa. Daddy says that it was “all business,” and assures Daya that she’s not a cheat — and in her defense, this particular “business meeting” convinces Annalisa to sell for them again. But Daya is not convinced that Daddy is being faithful. She needs to instill fear in Daddy to make sure something like this doesn’t happen again. 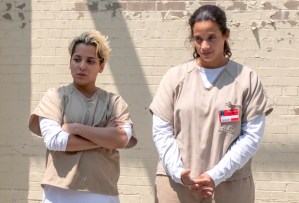 Later on, Alex heads down to the library to unload Hellman’s “wad” on Daddy. The dealer agrees to sell the drugs on Alex’s behalf, and the two agree to meet the next day to do the exchange. After Alex exits, Daya enters and brings Daddy a “gift”: Chinede’s prison hooch, which Daya has laced with fentanyl. It’s not supposed to be enough to kill Daddy; it’s just supposed to be enough to teach her a lesson. But later that night, Daddy downs the “Adeola special” and suffers a fatal drug seizure in her cell.

Daddy’s death forces the guards to do a late-night sweep. Hellman enters Alex’s cell and forces her to swallow a condom full of crack to evade drug-sniffing dogs upon an imminent drug search. After the bunk sweep, he enters her cell and supplies her with laxatives. The following day, Alex heads to Daddy’s cell to do the exchange, only to discover that the inmate has died. She returns to her cell, stashes the condom under her pillow, then heads down to see Piper.

On the bus up to Litchfield, Piper receives a call from Cal. He relays a message from her Thunder Thais boss, who has just called to inform her that she’s been fired. During visitation, Pipes lies to Alex and says her job is going just fine. Similarly, Alex lies to Piper and says that everything in prison is hunky dory.

As the episode draws to a close, Piper waits for her return bus. A Vietnamese woman approaches the bus stop with her infant and older son, and says something in her native tongue. “What did she say?” Piper asks the young boy. “She says it’s all different now,” he replies. Fade to orange.

Elsewhere in the premiere episode…

* A dead-in-the-eyes Taystee ventures out to the yard for the first time since she was sentenced to life behind bars. Pennsatucky advises Suzanne to keep her distance. “I realize she was once your friend, but now she’s a convicted murderer,” Penn says. “She’s a lifer.”

* Cindy is unable to forgive herself for betraying Taystee. Her guilt is eating away at her.

* Gloria and Red are still in SHU. Gloria tries her best to keep her spirits up, but Red has given up. Gloria tries to bond with Red over a game of Guess the Recipe, but Red forgets that they’re playing halfway through and doses off.

* Lorna has given birth to a baby boy named Sterling. She spends much of the episode showing pictures to Nicky via her contraband phone.

* Aleida convinces Hopper to keep their drug operation going. Little does he know that she’s staying with him just long enough to raise enough money to leave him. In the meantime, she’s hooking up with Caesar again.

* Jason Biggs and Maria Dizzia make their first appearances as Larry and Polly since Seasons 5 and 2, respectively, albeit in flashbacks to Piper’s pre-Litchfield life.

What did you think of OITNB‘s final season premiere? Hit the comments with your reactions to Episode 1 only, then check back later today and throughout the weekend for additional Season 7 coverage.