With Charles’ position at Mercury now public knowledge, he and Liza opted to proceed with a Mr. and Mrs. Smith-style relationship on Wednesday’s Younger — and we all know how well that worked out.

As expected, it took less than one full episode for the novelty of their rivalry to wear off, leaving Liza unsure of… pretty much everything. When Charles suggested that “a little healthy competition never hurt anyone,” she clapped back with, “It’s hurting everyone. I don’t know how much longer I can do this. The competition isn’t fun anymore.”

Naturally, Charles resorted to his usual cheap tactics, reminding Liza that he’s risking everything on the success of Mercury — a company that wouldn’t even exist had he not left Empirical to save their relationship. On top of that, he reminded her that he still owns his parents’ stake in Millennial, so “when you get to the bottom line, it’s still all me.” (We won’t even get into the fact that Charles dared to ask her, “Am I competing with Josh?” simply because he saw her playing with Gemma. This guy really is becoming the worst, isn’t he?) 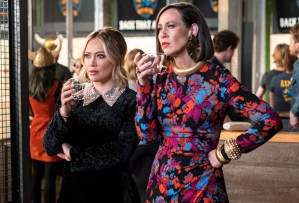 * An evening of commiserating over alcohol and axe-throwing (because, why not?) took an unfortunate turn for Kelsey and Diana when the latter was caught peeing in the street. And the cops might have let her off with a warning, had a drunken Kelsey not accidentally approached them axe-in-hand. The only question is: Will their joint arrested hurt Millennial’s already dwindling street cred — or help it?

* Speaking of Diana, can we talk about her incredible response to Enzo offering to take her shopping and let her pick out a new necklace? (“The thing is, Enzo, they choose me.”)

* And Josh discovered the joys of Insta-fame when Lauren decided to turn baby Gemma into a bonafide influencer. Sure, he had his initial concerns, but when he realized that he’d have to return all the free baby swag he’s gotten, he changed his tune. He did, however, draw the line at Gemma using her account to promote butt plugs, which I consider to be a real sign of growth. I’m proud of him.

Your thoughts on Wednesday’s Younger? The ongoing saga of Mercury vs. Millennial? Whatever’s on your mind, drop it in a comment below.