Alternate title for Pearson, the Suits spinoff starring Gina Torres: How to Make Enemies in the Windy City.

Wednesday’s series premiere finds Jessica Pearson possibly becoming a target as she makes waves on her first day as the right-hand fixer of Chicago’s mayor. The episode begins in media res with Jessica shredding crime scene photos of a murder. She then goes to meet up with the mayor, presumably, at a discreet location, but he’s not there. Suddenly, a van comes rushing at her and then… bam, it’s eight weeks earlier, and she and her beau Jeff Malone (Lucifer‘s D.B. Woodside) are arguing about her new job. He can’t believe that she’s going to work for a professional liar, who might be connected to the death of a man who went up against the city. Jessica, meanwhile, thinks this gig will allow her to do more with her life. “Like it or not, I’m taking that job. And I won’t have this same conversation every morning,” Jessica declares.

That’s not to say that Jeff doesn’t have a right to be worried, or that Jessica is clueless about the shadiness of Mayor Bobby Novak (Homeland‘s Morgan Spector). The premiere features a couple of big reveals about the politician: His cop driver Nick D’Amato (Agents of S.H.I.E.L.D.‘s Simon Kassianides) is actually his bastard half-brother; the married mayor is having an affair with city attorney Keri Allen (One Tree Hill‘s Bethany Joy Lenz); and he’s got ties to dirty money from developer Pat McGann (The Leftover‘s Wayne Duvall). 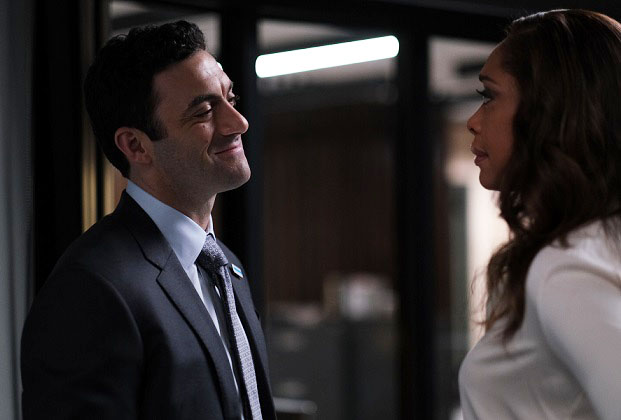 Pat is angry about Jessica’s new position, but Bobby sees it as keeping his enemies close. However, he got a bit more than he could handle with Jessica, who goes off-book while dealing with a hunger strike, a bus manufacturer and one of Bobby’s closest allies in the city council. In the process, she also angers Keri, who doesn’t take kindly to Jessica treating her like a lowly associate.

“I’ve been underestimated my whole life because I don’t look like a policeman’s daughter. But I’m 33 years old, and I’m the city attorney. I didn’t get where I am by being stupid,” Keri warns Jessica.

As successful as she is at solving the city’s problems, Jessica knows the real reason the mayor brought her in: “You have a problem you need solved… Tell me what Pat McGann has on you,” she requests. The answer is back at home, where Jeff announces he’s leaving for a trial in Miami. While that’s not a great sign for their relationship, his parting gift suggests he’s still got Jessica’s back: a Department of Justice case file on that murder crime scene, with surveillance photos of the mayor’s brother.

What did you think of Pearson‘s debut? Grade it via the poll below, then hit the comments!