Warning: The following contains massive spoilers for Tuesday’s Animal Kingdom. If you’d rather be surprised when you watch, look away — fast!

Neil Sedaka wasn’t kidding when he sang “Breakin’ Up Is Hard to Do.” In Tuesday’s Animal Kingdom, J and Mia’s volcanic split erupts in a round of tit for tat that doesn’t end until one of them no longer has a pulse. You can probably guess which — or (hint, hint) Morgan could tell you, were she still breathing. But read on, anyway. How it — and this sociopath — went down is some of the juiciest stuff so far in Season 4. 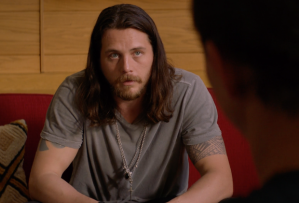 ‘WHO’S GONNA BAKE THE PIE?’ | As “Ambo” began, Deran encouraged Adrian to tail Livengood in order to obtain info with which he could blackmail the DEA agent (even though it seemed to me that Pearce had become the bigger problem, no?). In response, Adrian came thiclose to asking his boyfriend if he killed Ox. “Hey,” replied Colby’s murderer, “I don’t kill people.” Meanwhile, J tracked Smurf’s car to the airport, and Angela refused to let Pope pretend that he couldn’t watch Bride of Chucky with her for any reason other than that he and the guys were pulling off a heist. Later, while waiting to steal an ambulance — ya know, as one will — Deran told Craig that he was lucky Renn had taken off. If she was still with him when she had the baby, “you gotta feed the thing like 14 times a day.” In response, Craig remarked on the way Deran had turned out after being raised by his older sibling. Damn, dude really did wanna play house with Renn.

At a pre-heist meeting, the boys were concerned about Smurf’s vanishing act but not so concerned that they didn’t move forward. To his credit, if you can say that about a robber, J knew his s— backwards and forwards and ensured that his uncles did, too. There was just one problem: If Smurf didn’t make it back in time, who was gonna bake the pie that signified that the job was done and everyone had made it back safely? “I’ll stop by Safeway,” Pope said. Good enough. Only it was gonna take more than a Safeway pie to keep this job on track. At the Chronic Dread Festival, Pope and Deran managed to load up the ambulance with light and sound boards, but after Craig knocked out a whole bus full of A-list partiers to steal their jewelry, security was alerted, and they had to beat a hasty retreat. 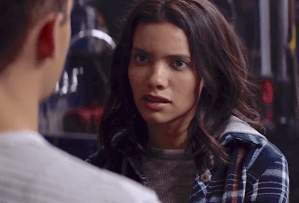 ‘WE HAVE TO KEEP THIS ON THE LOW’ | The Codys even made it through the lockdown. “Overdose” in back, Deran told security. And just as the guys were celebrating their getaway, they were rammed by a truck. Holy s— — not just any truck, either. It was freakin’ Mia and Tupi! “Tell your nephew I said hi,” Tupi told Pope, the only conscious Cody, as he slunk away with the bag of money and stolen baubles. When Deran and Craig awakened, the Codys did an emergency wipe of the ambulance and stole a pickup from a good Samaritan. At the bar, Pope said nada about what he knew as the Codys pondered who might’ve hit them. “It’s not Frankie,” insisted Craig. When J showed up, he suggested that they lay low, and when the fence tipped him off that someone was trying to move the jewelry, they’d hit ’em back. But since the cops always had an eye on them and they were all banged up, they’d need to stage an accident to explain their injuries.

Once alone with J, Pope angrily marveled that “we get hit, but you’re fine?!?” He also relayed the message he’d been given. “Somebody’s been watching us,” he growled, “and you and I both know who it is.” Wait, they do? I mean, J does, or he should. But would Pope jump to the conclusion that it had been Mia? Elsewhere, she and Tupi looked over their haul, and he snapped selfies in a rapper’s stolen chain as if to underscore what an idiot he is. Later, J paid an ominous visit to Pete, who summoned Mia and Tupi to the garage. Tupi lied that they were innocent, but being an idiot, did so while wearing one of the stolen chains. Pete responded by immediately shooting him in the head. But he wouldn’t shoot Mia. Instead, he used the three harshest words in any parent type’s arsenal — “You disappoint me” — and told J, “She’s your problem to deal with… or not.”

‘YOU NEED TO TIGHTEN YOUR GAME UP’ | Once alone with Mia, J had her explain how she’d gotten the better of the Codys, and she protested — as I’ve long said! — that he should’ve seen it coming. “You treat me like your whore, then you treat me like your maid!” She then suggested that she could work for him, do the things that he didn’t want to, like the killing. It didn’t bother her. When he remained unmoved, she confessed, “I killed Baz. Pete paid me to kill your dad, and Smurf paid him to do it. Is that who you’re gonna trust? Family doesn’t do that to family.” Unfortunately for her, “they’re all the family that I’ve got,” he replied. With that, we cut to outside the garage and heard a shot fired.

At Deran and Adrian’s, the informant reluctantly revealed to his boyfriend that it appeared Livengood had a small child. From Adrian’s expression, it was clear that he could tell as well as we could where this was going. Elsewhere, Craig reached out to Renn, to no avail, and Angela couldn’t contain her s—-eating grin when Pope rested his head in her lap the way he probably did a million times with his mother. Finally, J exited the garage covered in blood. I was still convinced that he hadn’t shot Mia, that she was gonna pop up off the ground and they were gonna take out Pete or something. But no, he’d actually iced her. Furthermore, he announced to Pete that “Smurf’s dying — cancer. You’ll be dealing with me now.” Did his uncles know? “They will.” Man, he’d better hope Smurf dies, the way he’s been blabbing about her condition all over town! 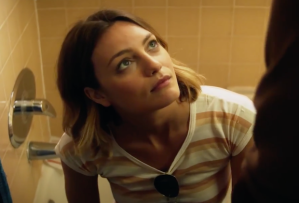 ‘IF SOMEBODY HITS ME, I HIT BACK’ | And in our 1970s flashbacks, while the gang futilely searched Pam’s house for their stolen loot, Janine bribed a neighborhood kid into revealing that Phoenix and his mom had gone to her mom’s. Afterwards, while the guys argued about what to do and who was to blame, Janine took off to “get drunk.” Translation: scare the money out of Pam, who suggested that instead, they team up since no way would the guys ever let Janine call the shots. Nah, “I don’t like kids,” said an expectant Janine. Then, “how about I give you half?” Pam asked. Deal, said Janine — if Pam also gave her the van. The tension evaporating from their conversation, Pam suggested that kids weren’t that bad, especially if one started thinking bigger. (Ah, the genesis of Smurf’s idea to form her own family gang.) When she returned to the guys, she lied that she’d found the van on the side of the road out of gas. As a recovery fee, she said, they now owed her her share of what Pam had stolen, payable after the next job. In private, however, she revealed her score to Colin, who promised to keep his lips zipped. (And what thief wouldn’t after she shoved a wad of cash down his pants?)

So, what did you think of “Ambo”? Were you surprised that J actually killed Mia? Will Deran’s desire to use Livengood’s kid as leverage turn Adrian against him? And where the hell is Smurf? Hit the comments.