Pearson may be borne of Suits, but there will be no mistaking the two shows when the spinoff debuts next Wednesday, July 17 (at 10/9c on USA Network).

The Chicago-set offshoot is not only grittier than the mothership legal drama, but also finds disbarred lawyer Jessica Pearson taking a break from the wealthy to help the disenfranchised in her new role as the mayor’s right-hand fixer. “Where you’re used to Jessica dealing with storylines that really affect the five percent and those who want to be part of the five percent, this is a show about the other 95,” star Gina Torres tells TVLine.

Below, the actress previews Pearson‘s “darker” tone, the Suits pals who may be dropping by and where things stand between Jessica and her beau Jeff.

TVLine | Even after we said goodbye to Jessica on Suits, we still saw her quite frequently on the show, and now you’ve got the spinoff. Was it hard for you to let go of the character?
You know, I had absolutely no desire to revisit the character when I left Suits. [Laughs] I thought I was done, and then some time went by, and I started thinking about her, and I started thinking about what she might be doing, and it just happened to coincide with the 2016 election. Politics, it was like must-watch TV. It was just insanity, all the things that were happening, and I started thinking about Jessica, what she might do in the political arena, because of her skill set, because of what she’s so good at, and that was the seed that gave us this. 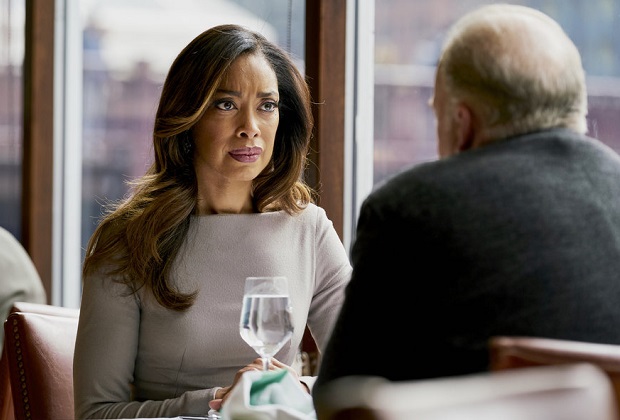 TVLine | You could potentially be doing this show for several more years. What makes her still so exciting for you to play after all this time?
She had always been sort of this mystery, quite frankly. Jessica Pearson is an enigma. She existed on Suits in a very, very specific way. You knew very little about her past, you knew very little about her present. She was always trying to put out fires and manage those monster personalities at the firm. And so this, I feel like it’s brand new. We’re getting to mine this very rich character that we really didn’t have much time with, in real ways. There’s still so much to learn about her, her family, how she really processes her choices, and what she wants to do, and what it costs her at the end of the day, in real time. So that’s exciting for me. We get to see her as a whole person, not just as someone that sort of exists to keep her firm alive.

TVLine | On Suits, she was a very fierce, very powerful character. Are we going to see a different, perhaps more vulnerable, side of her in the spinoff?
Absolutely. For all those who love Jessica and what a badass she is, and how confident she is, what’s wonderful about this show is that she is a fish out of water. You’re not always sure she’s going to win, and so you want to root for her, you want that Jessica that you know to emerge victorious at the end of the day. But it’s going to look different, and it’s going to be hard, and so that’s going to lend itself, yeah, to more vulnerable moments.

TVLine | How would you say Suits and the spinoff differ tonally, and structurally?
It’s a very different show. This show really is its own animal. I would say for Suits fans, if you were the fan that loved intelligent, witty television, we’ve got that. If you’re the fan that loves rich characters and great storylines, we’ve got that. We still have great fashion. But that’s where we draw the line. Tonally, we’re darker. Tonally, we inhabit a much more realistic world, where there may be still some wish fulfillment, some fantasy fulfillment elements to it. You get the sense that she’s in a world that is more accessible, and she’s surrounded by people that you may very well know, as opposed to people that you really hope you run into in an elevator. [Laughs]

TVLine | For the die-hard Suits fans, are there any familiar faces from Suits that they can expect to see?
There might be. Here and there. 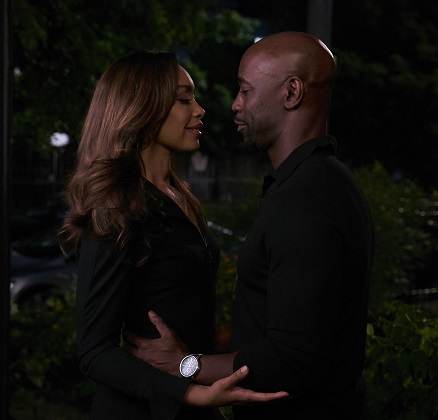 TVLine | And what is going on with Jessica’s relationship with Jeff Malone?
Well, she moves to Chicago to  be with her man, and it’s twofold: She wants to get back to her roots as an attorney, she wants to use her powers for good and not evil, and she really is at a point in her life where she’s looking for more, where she wants more depth and richness in her relationship. So, yes, she’s making a go of it with Jeff, and she also has a family that she’s getting to know, her father’s side of the family.

TVLine | There were hints that this is a very dangerous world and talk of murder in the backdoor pilot. How precarious is Jessica’s situation?
Very. When I said it’s a darker show, all of that comes into play. We’re really playing on the historical corruption in the city. That’s something that’s well documented, goes back hundreds of years, and so we’re using that as a backdrop. It’s not just the corruptive nature of politics. We’re touching on everything that’s happening right now. We’re touching on immigration, we’re touching on gang violence, we’re touching on people that don’t feel that they’re being heard.