TBS’ The Detour (Tuesdays at 10:30/9:30c) has embarked on one its more unexpected side trips, with the reveal that Robin has a twin, named Bluejay. “BJ,” as she is called (and for which she is regarded?), at first came off as just a wilder child, then later revealed herself to be downright bats—t.

When last we tuned in, BJ was at “husband” Nate’s side, having chopped her locks to match her twin’s and left an unconscious Robin shackled inside a barn. So if you’re a fan of Natalie Zea, this uproarious arc is truly twice as nice. What turns will the case of the duplicitous doppelgänger take? TVLine invited Zea to tease what’s to come — as well as weigh in on her real-life husband’s “idiotic” role in it all.

TVLINE | As I said on Twitter last week, I was not expecting two of you.
Yeah, well, me neither. [Laughs] I mean, obviously I was, but prior to that, I wasn’t.

TVLINE | Was the dual role any kind of a secret about this season that you weren’t able to share with people?
It’s funny, because I did a few interviews before the season started, with people who had seen [screeners], and everybody asked me about it, so I guess it wasn’t a huge secret. I guess it depends on who you ask, because I thought it would be a great little surprise. I think it was a nice little twist.

Memories From the Set: Natalie Zea 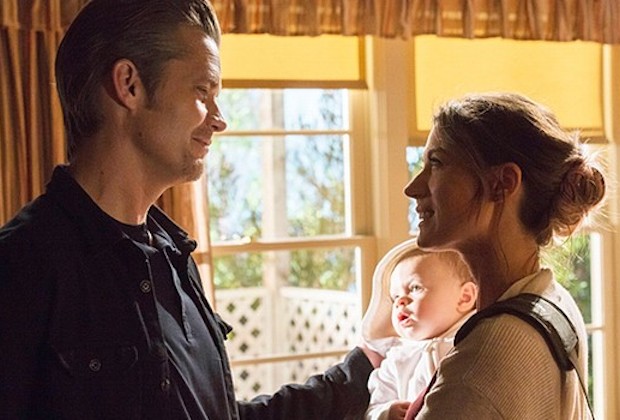 TVLINE | How much time did you get to prepare for BJ?
Well, we get scripts for, like, the first three-quarters of the season before we start shooting. So, I had it, but I’m not big on preparation, so I didn’t do a lot. A lot of that was, like, game-day stuff, but I think it’s OK, because again, a lot of it’s just in the…

TVLINE | So much of it is her language.
Totally, yeah. I really don’t have to do much.

TVLINE | Did you get to do any evil twin stuff over on Passions? I was trying to remember….
No. No, there were a couple people who got to be evil twins. I wasn’t one of them. I wasn’t quite important enough!

TVLINE | So, no chance to pick up any of the tricks about how to act opposite yourself, to have the right eyeline and everything….
No, but when I did The Following, Sam Underwood played twins, so I was prepared for how tedious it can be. I mean, it wasn’t tedious for us, because our schedule is so unrealistic, to be honest. There was no tedium, but there’s a lot of repetition, because you have to do everything twice. I was prepared for that, because I had watched Sam do it, and the guy they had hired to play Sam’s double was so great. He really put a lot of effort into it. [Co-star/series co-creator] Jason [Jones] and I we were on the same page with making sure that my doubles, the BJ double and the Robin double, were actors instead of just [stand-ins].

TVLINE | I hear that all the time, that it’s really important.
Really important, and they were incredible. One of them went onto YouTube and watched interviews of me so that she could get my cadence and gestures down. Crazy, right? They were honestly two of the hardest-working people on the show this season, they were just so present. I mean, there were very, very, very long days, and sometimes one of them wasn’t doing anything except standing off-camera and watching my gestures, aping me as I’m doing the scene, so that when it comes back around, she can make sure that she’s in sync.

TVLINE | That is the one thing that drives me nuts with doubles, is when you can tell they’re just standing there, and I’m like, “Natalie’s more animated than that! She gesticulates! She would cock her head there!”
Yeah. They really, really had it down, and what was crazy is they both were very specific about who they were playing. They weren’t just being me playing these characters. One was very specifically BJ and one was very specifically Robin. They went all-out. It was great.

TVLINE | What’s going to be hardest for BJ passing herself as Robin?
[Her eventual downfall] ends up being something really stupid, of course, a slip that should’ve been a gimme. She fouls it up at the last minute.

TVLINE | I guess the question might actually be: Does she even try?
Yes. I will say yes, in her own way. 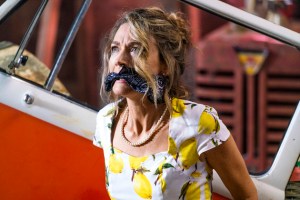 TVLINE | And what’s it going to take for Robin to get out of her predicament? We last saw her knocked out and chained up in a barn.
Well, she has to be dependent on some real idiots. [Sarcastically] She’s really super-patient with that kind of stuff, too. So, it should be “fine.”

TVLINE | One of those idiots is played by Mr. Travis Schuldt (Zea’s husband of nearly five years).
Indeed. He wasn’t going to come to location, because our daughter was starting school and he was actually working a lot on Splitting Up Together during the same time. He was like, “Look, you’re on your own, we’re not coming to see you.” So, I asked Jason if he could hire him for an episode or two, just to get my family out to Vancouver. He ended up getting to come out for two weeks, and then another two weeks later on, and it all happened to land on my daughter’s birthday, so it couldn’t have worked out better. 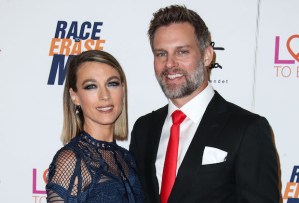 TVLINE | Objectively speaking…. How did he do as an idiot?
That’s kind of his niche, so…. had he f—ked this one up, it would’ve been really embarrassing. It’s, like, his forte, so he really had no excuse to not nail it.

TVLINE | Knowing this storyline was coming up, did you make any effort to make Robin a little more, not “nerdy,” but….
Not crazy? More subdued? No. That would’ve been a really good acting note, so thanks for that after the fact. [Laughs]

TVLINE | Because when BJ remarks on what a drip Robin is, I’m like, “She’s not, though. She’s cool.”
I know, she’s not that bad. But BJ’s also f—king insane, so… you can’t really trust anything she says.

TVLINE | Have you ever spoken more coarsely for a character?
Yes, because I’ve done two Tom Kapinos shows (Californication and White Famous). But minus the Tom Kapinos shows, that would be a no. BJ definitely doesn’t hold much back with her language. 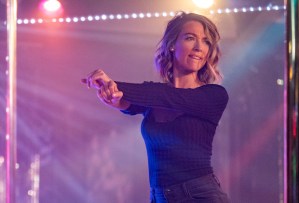 TVLINE | I don’t think it’s a spoiler to say that one of your characters does some pole-dancing in this week’s episode. Surely there are some anecdotes from that experience.
Well, as with everything on The Detour, there was no real rehearsal or discussion of what was going to happen. We just basically let the cameras roll, and I went for it, and Jason does what he does best — he just reacted. It was not a sexy dance. Nothing is sexy about this dance…

TVLINE | But it looked tricky, some of the stunt-y moves, like when you get your foot stuck in a [spoiler].
Yes, thank you. No easy feat, right? But my stunt double did the big stunt [at the end of the routine].

TVLINE | I screamed when that happened.
Yeah, that was not me, even if I wanted to.

TVLINE | You guys are so brave on this show with physical humor.
Honestly, when I look at it on the page, I usually don’t understand, and then once we get to set, it starts making a bit more sense. It’s very much all inside [Jason’s] brain.

TVLINE | This show keeps reinventing its premise. Will the finale hint at what Season 5 might be about, if you get renewed?
The last few scenes of the season finale will not make any sense until/unless there’s another season. So, talk to the boys upstairs! 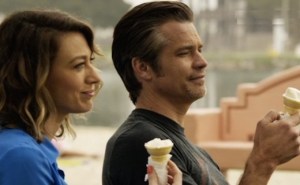 TVLINE | Speaking of finales, as part of TVLine’s End of Decade roll-out, we named Justified one of the best series finales of the 2010s.
Yeah, everybody kind of got their happy ending…. It’s funny, because when you’re a little further removed from it, you’re like, “Well, that’s the only way that could’ve ended.” I think it was really bold and brave of them to make it a sort of blood-free episode, you know? Like, not blood-free literally, but there was no sort of comeuppance for anyone in that sort of sense, and I think that that was sort of, ironically, the biggest twist of all. Everybody came out relatively unscathed.

TVLINE | You had Raylan and Winona enjoying some ice cream, watching the kid romp around. It was downright domestic.
How unexpected, and great! I just remember, in the weeks and months leading up to that, there was a lot of speculation about how Justified was going to end, and who was going to die. It was very Game of Thrones, like, “OK, who’s going to make the kill list? Because obviously it’s going to be a blood-bath”….

TVLINE | But even Wynn Duffy survived!
Yeah, everybody did. Yeah.