Oscar winner Russell Crowe is nearly unrecognizable in The Loudest Voice, Showtime’s limited series based on the life of the late, disgraced Roger Ailes. The seven-part drama, which premiered Sunday, chronicles Ailes’ career as the founder of conservative news empire Fox News Channel, from his days as a right-wing media juggernaut, to his eventual fall from grace after a series of sexual harassment allegations.

After opening on Ailes’ lifeless body upon his death in 2017, we journey back to 1995, following his departure from CNBC. Ailes had been terminated following a human resources investigation, and we catch up with him as he meets at the residence of General Electric CEO Jack Welch to convince his former boss to loosen the terms of his noncompete agreement. This paves the way for Ailes to accept an offer from News Corp to create Fox News. Shortly after his CNBC exit, Ailes joins News Corp CEO Rupert Murdoch (The Theory of Everything‘s Simon McBurney) at a press conference to announce the soon-to-be competitor to CNN and the fledgling MSNBC.

The rest of the episode focuses on the 12 months leading up to Fox News’ launch on Oct. 7, 1996. At a meeting of Fox News execs to discuss the network’s programming plan, Ailes advises that the network go niche and appeal solely to conservatives. “Right now in America, 60 percent of the people think that the media is negative — that it’s full of lies, full of bias, full of crap,” he says. “We’re just gonna give the people what they want: a positive message — an American message — wrapped up in a conservative viewpoint.” 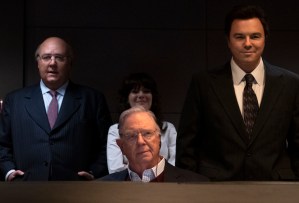 Crowe as Ailes, Boyd as Collier and MacFarlane as Lewis

Over the next few weeks, Ailes brings in some of his former cohorts, including Bryan Lewis (The Orville’s Seth MacFarlane), CNBC’s VP of Public Relations, and Chet Collier (Sharp Objects‘ Guy Boyd), CNBC Senior VP. He also sets up a rather informal meeting with former Bush Sr. campaign staffer, Laurie Luhn (Peaky Blinders‘ Annabelle Wallis), who years later would accuse him of sexual abuse. During their get-together, Ailes greets Luhn with a kiss. He later says to her, “I do like you in a pearl necklace.” His intimidating offer to come work for Fox News’ D.C. bureau is intercut with footage of them going back up to her hotel room.

Months later, we see Ailes interview a young brunette in his office, behind closed doors. Her name is Chloe. He comes out from behind his desk, approaches her and tells her to twirl for him. He puts his hands all over her — first her arms, then her waist, and finally her face. At one point, his fingers touch her lips. “How do you get on with your dad?” he asks. The scene ends there.

While it’d be years before Ailes’ sexual misconduct caught up to him, we do see instances of him being reprimanded for other inappropriate behavior. Months ahead of the network’s launch, Ailes verbally berates a female reporter in the control room. After she quits, Murdoch calls Ailes up to his office and issues a warning. Ailes, however, thinks he’s invincible. “If I don’t tell you about a problem, then it’s not your problem,” he says to Murdoch.

The episode’s climax comes when Ailes calls in all Fox News employees to attend a pre-launch meeting at four — yes, four — in the morning. It’s two weeks before the big day, and the entire operation is a mess. He gets into a screaming match with exec VP Ian Rae, and fires a random employee on the spot. Born from his anger is a rally call. He waxes on about their mission to create a conservative news network that lets the “forgotten American” know “that their voice can, and will be heard… We’ll give them a vision of the world the way it really is, and the way they want it to be.” Their goal is to “reclaim the real America,” he says. “We challenge the existing agenda and we become the loudest voice.” 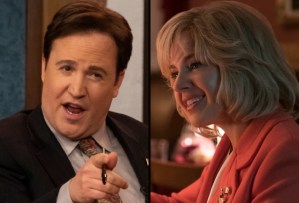 Darragh as Hannity and Miller as Tilson

Other key figures in the first hour include Elizabeth Tilson, onetime CNBC VP of Programming and Ailes’ then-girlfriend, whom he’d marry in 1998. Also featured are Ailes’ executive assistant Judy Laterza (Halt and Catch Fire’s Aleksa Palladino) and Sean Hannity (The Path‘s Patch Darragh), a young radio shock-jock plucked from Atlanta. Additionally, the episode makes mention of Bill O’Reilly (at one point, Collier alerts Ailes that O’Reilly “lost another producer this morning” due to his infamous temperament), and Hannity’s onetime cohost, the late Alan Colmes. Notably missing is Gretchen Carlson, who would not make her Fox News debut until 2005. (Her portrayer, Naomi Watts, first shows up in Episode 3.)

What did you think of The Loudest Voice? Grade the premiere via the following poll, then drop your thoughts in a comment below.