When Emmy nominations are announced next month, we’re not expecting Netflix’s juicy soap What/If to earn many nods — if only because they don’t have categories for Wildest Plot Twist or Most Enviable Luxury Condo. (Not yet, anway.) What/If just isn’t the kind of TV show the Emmys are equipped to honor, and that’s fine, but now that we’ve finished binging Season 1, we want to take a moment and offer our appreciation for Renée Zellweger and her gloriously over-the-top performance… which, in its own weird way, was as compelling as any TV performance we’ve seen this year.

Zellweger plays villainess Anne Montgomery, a fabulously wealthy venture capitalist who ensnares a young couple played by Jane Levy and Blake Jenner in a dense web of sex, lies and intrigue. (Don’t worry about those two: They’re not all that important.) Anne uses her incredible wealth as a weapon to toy with those around her, like a bored child, and seems to be a bit of a sociopath, too, watching people express actual emotions with a cold, detached bemusement. (She also has some alarmingly violent hobbies: She fences! She does archery!) In short, she’s a terrifying person… but with Zellweger playing her, we couldn’t take our eyes off of her. 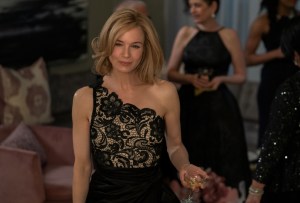 Like an impeccably styled mash-up of Marilyn Monroe and Sheryl Sandberg, Anne dispenses fortune-cookie business wisdom (“No species is fully capable of imagining its own extinction, but a failure to imagine the future won’t prevent that future from devouring you”) in a breathy, girlish voice before swiftly crushing her opponents like the insects they are. She’s almost supernatural, always five steps ahead of everyone else and giggling at their pathetic attempts to outmaneuver her. (The writers did eventually give Anne a tragic backstory to humanize her, but we kind of wish her origins had stayed mysterious, like she arrived fully formed from another planet.)

The show itself, from Revenge creator Mike Kelley (which makes sense, right?), is utterly ridiculous at every turn, and Zellweger seems to be the only one in on the joke, chewing up every square inch of scenery and embracing every supremely silly line of dialogue. Zellweger seems to play Anne as slightly drunk at all times, with an air of tipsy confidence, as if she downed a couple flutes of Champagne before each take. She’s not afraid to look foolish, and that ferocious, all-in commitment holds What/If together across some very shaky narrative ground.

When Zellweger isn’t on-screen, What/If is a serviceable but ultimately disposable soap: the TV equivalent of a breezy summer beach read that you forget as soon as you’re done with it. But when she is on-screen, she elevates it into something we couldn’t possibly forget. And in a way, that’s a greater achievement than half the performances we’ll hear about Emmy nomination day. Zellweger is an Oscar-winning actress; she could’ve easily signed on to headline a respectable prestige drama for FX or HBO… but we’re so glad she didn’t. Thank you, Renée: The Emmys might not recognize your unique accomplishment, but we sure will.