This week on Marvel’s Agents of S.H.I.E.L.D., Simmons and Fitz were at long last reunited, though the path to each other’s arms was a wild one in typical, but horrific, ways.

For starters, FitzSimmons were reunited only in a mind prison created by Atarah, so that their collective genius could solve the problem of time travel. Thing is, though, when minds are links, it’s not only scientific equations that get shared. It’s everything, including anxieties. Ergo, Jemma transformed into her pre-teen self, leading Fitz into her virtual childhood home. There, a music box inside of which Jemma “keeps” all of her repressed issues eventually coughed up a ghoulish manifestation — or, “Demon Simmons.” As if that wasn’t enough, they also had to contend with Leopold aka Fitz’s Nazi-like Framework self.

As the two tried to elude their bogeymen, they at one point found themselves inside the Lighthouse, alongside the rest of the team, where Fitz gleaned that all was not right with Coulson. Worse, Fitz laid eyes on his own, newly dead body, after which he Fitz discovered that — just as he had done earlier in this episode, using the near-exact same words — he had proposed to Jemma.

What else about the year-plus that he was “missing” was left to be revealed? Oh yeah — after being sprung from Atarah’s mind prison by a rogue Enoch, and just before teleporting off of the Chronicom ship, Jemma blurted out that Fitz is a grandfather! “What the….” indeed!

“He’s missed some huge things, this version of him,” Elizabeth Henstridge, who plays Jemma, affirmed during TVLine’s visit to the S.H.I.E.L.D. set. “This happened and this happened…. There’s a lot to get through, and we’ll see how he reacts to that.”

Iain De Caestecker, acknowledging that his character “has a natural disposition to be angry,” previewed that Fitz will be “frustrated” upon processing all this new information. For one, he missed his own wedding, “so that is kind of weird,” he noted. 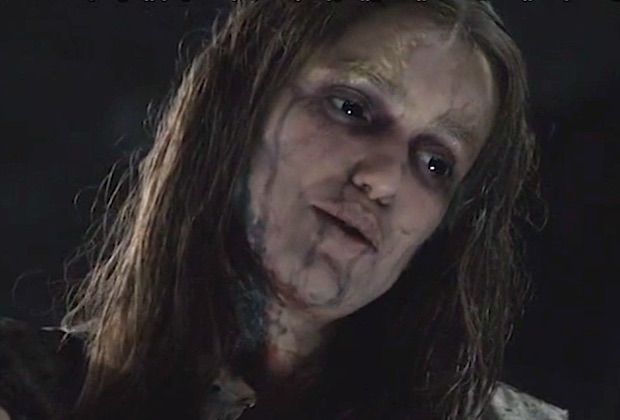 Here in Part 2 of this week’s Q&A with Henstridge, she gushes about getting demonic and also teases not-ready-for-primetime outtakes from that Leopold/Demon Simmons hook-up.

TVLINE | At the end of this week’s episode, Jemma says, “I’m exhausted” — and all I could think was, “Elizabeth must have been exhausted!” This was a huge amount of work for you and Iain.
[Laughs] I know, it was! It’s such a great line because it’s so simple and just so true, and so loaded with just everything. There comes a point where life gets so crazy you have to go, “I’m tired. I need a second.” We’ve all been there. But for me, the more time I can be on set, the better. If I’m in all day, every day, that’s my ideal. So yeah, I was tired, but you’re doing what you love, so you just pump on adrenaline. That’s what I moved to America to do. That’s the easy thing; auditions and trying to get the job is what’s exhausting. Give me 16-hour days every day and I’m a happy duck.

TVLINE | Between the mind prison and flashbacks, you got to play several different Jemmas. Which was your favorite?
Oh, Demon Simmons. She was my favorite by far, I’m so obsessed with her. I’m trying to work on maybe a one-woman show with her, after playing her for a day. [Laughs] It was really freeing, and it was the perfect representation of what it is to create a character, because it was so much about all the other elements as well — the writing, the wardrobe, the makeup…. R.J. McCasland, the special effects makeup guy, he is just so smart and sensitive. We spoke a lot about how this was a collection of all the things that have traumatized Simmons, so what part do we use from which episodes? It was such a collaborative thing, to get to what she looks like in the end, but it really felt like I was part of it.

TVLINE | I have to say, at first I didn’t realize that it was you. I was like, “Who’s under there?” And then they did a close-up and, “Oh my god, it’s Elizabeth.”
The people on set didn’t recognize me either, and that was really great. I got in so many good scares!

TVLINE | Fitz said a couple of times it was so terribly English for Jemma to keep stuff bottled up. Is that a terribly English thing?
Oh of course, yes. As a culture we’re very good at keeping it all proper on the surface, while underneath we’re maybe reeling a bit. I think it’s changing now; this generation is much more open. But previously, nobody in England would have a therapist, so it was an unusual thing to come to America and there are therapists all over the place! We’re definitely learning from American culture to be maybe more ready to talk about our feelings. I’m a bit different because Im an actor, so all I do is talk about my feelings. But as a general stereotype, we do have that “stiff upper lip.” 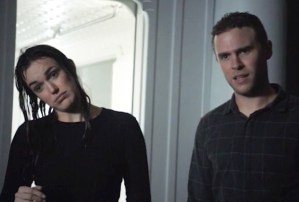 TVLINE | Toward the end of the episode, I’m looking at Leopold looking at Demon Simmons, like, “No, they’re not going to kiss….” And then sure enough…. What did you think of them going at it?
[Laughs, a lot] Oh my God, it was just so…

TVLINE | Something about it was so wrong.
For sure. We definitely have some funny outtakes from that, because there was a shot where I….. Well, it was probably just too much for whatever time it is we’re on. We did some outtakes where we really pushed it. [Laughs] It was just so weird to do, because it’s not a normal kiss.

TVLINE | She threw him down and flipped him over, and FitzSimmons’ heads tilt. “I didn’t know you liked that”/”I didn’t know you do that.”
Lines like that, I never thought we’d be able to do, and it’s so great that we can. It was really funny. To do [love] scenes is always weird, but, like, it definitely was, I dunno….. D.J Doyle killed it with those little moments where you go, “No, they could never…. Oh my God, they wrote it, we’re filming it and it’s going to be on the television!”