This Friday’s episode of Marvel’s Agents of S.H.I.E.L.D. (ABC, 8/7c) could get filed under “Be careful what you wish for.” For though Fitz and Simmons have finally been reunited, in the flesh and after well over a year apart, you’ve seen this movie before, folks: It ain’t ever easy for this “cursed” couple.

TVLine spoke with Elizabeth Henstridge about the “very ambitious” episode, the “new” Jemmas we will meet, Season 6’s split-up team, and more.

TVLINE | How happy of a reunion will it be for FitzSimmons on Friday night?
I mean, as happy as a FitzSimmons episode can be. They’re very relieved to be back together, but it’s never quite that simple with the two of them. So yeah, expect the usual trauma that comes with the pair of them sharing the screen.

TVLINE | The synopsis for the episode says they will need to battle some “demons” upon being reunited. What sorts of demons?
Their inner demons, really. That dark side we all have in ourselves, that when you work in sci-fi gets to be personified, which is super-fun. They already know everything about us, so how can we fight them? It’s a tricky one.

TVLINE | It’s been so long since Season 5, it dawned on me that there is so much for them to catch up on. What do you think Jemma is most anxious to disclose to Fitz about what has happened in his “absence”?
I think she is most anxious about how he will react to Coulson’s death, how he is going to take it. In an ideal world, she doesn’t want to talk about; she just wants to enjoy their time together and be together again. Fitz has a history of anxiety, so she’s nervous about how he will be able to digest all this information. 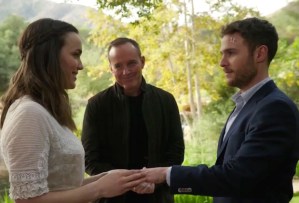 TVLINE | Because make no mistake, there are many things to cover. Some happy, some bittersweet…. “We have a grandchild! We got married while you were away!” I’m sure she wants to parse it all out at the right time.
Right, exactly. But whether she can do that or not…

TVLINE | All told, what range of emotions will FitzSimmons fans go through while watching this episode?
Oh, God, every emotion! You’ll laugh, you’ll cry, you’ll need to call your Mom…. As much as we know these characters and as long as they have been around, I think you learn something new about them. We get to see how they met, where they were both at and what they were thinking…. We also get to experience a darker side of Simmons we haven’t seen before, which was cool.

It’s a very ambitious episode. Reading it, I loved it, but it was definitely a mountain to climb. But with Jesse Bochco as director, I knew we were in good hands. And we did it. We made something that we can be really proud of. As an actor, it’s a dream to play a few different versions of yourself, to discover things about [Jemma], especially after six years. I don’t know how the writers do it, but they do, and I love it.

TVLINE | As an actor, did this season feel a bit different to film, because the cast was split up into two such distinct storylines/locations? Like, would you bump into Ming[-Na Wen] at crafty and realize, “We have not had a scene together in two months”?
Yes, it was like that. We did have these conversations like, “Hey, we should grab lunch because I never see you anymore.” We’ve been separated before in terms of storylines, but Season 6 was definitely an extreme that way.

You know, we thought Season 5 was it. We thought that was the end of the road and by the time we got to the last episode it was really difficult to film. But it felt like we all had to accept, “This is it.” And then we got the sudden pick-up and Season 6 has had this, I don’t know, “vibe” of, “What have we always wanted to do? Let’s just give it a go and see if it works!” There’s a freedom and abandonment to that that is so courageous for the creators, because they had a formula that works. But it feels like they’ve gone, “Well, what about this…?” It feels good and fresh and exciting. It even feels a bit dangerous! 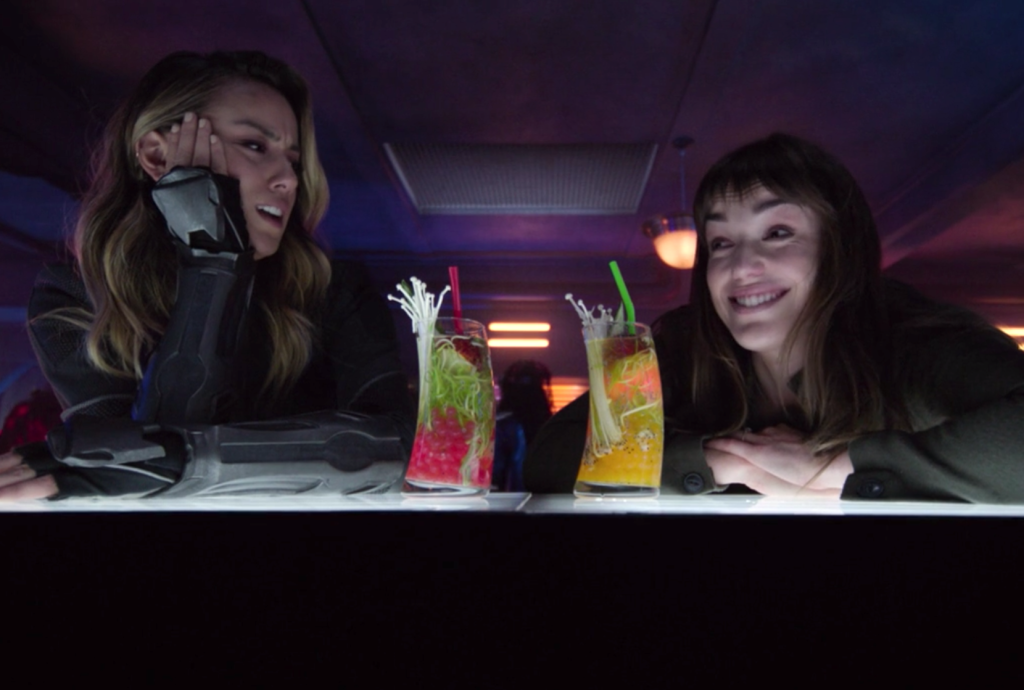 TVLINE | You must have a fun anecdote about the episode in which Jemma and Daisy were “trippin’ balls” at the casino….
[Laughs] It was so fun. Chloe and I have had those sorts of conversations 10,000 times over the years, so it was really nice to get to do those scenes with her in particular. We’re close friends, and comedy works best when you’re comfortable with the people you’re in the scene with, as well as those behind the camera, and that team was the best. The director, the writers, everything. We could just play. It was as if we went out for a drink and just happened to be filming at the same time. And I cant believe that they didn’t really do any alt takes! I thought we would do the version that we did and then bring it down a bit and do a more “sensible” version, and we just didn’t, ever. What we did is what you saw!