One of Callie’s paramours made their feelings for the brunette very clear during Good Trouble‘s Season 2 premiere.

After having a work-related disagreement, Jamie came to The Coterie to apologize to Callie and explained that he was just trying to protect her… because he loves her! Perhaps tellingly, Callie responded not with an “I love you, too,” but with a kiss.

“Callie’s a waffler. Callie’s always got, like, at least half a foot out any door,” executive producer Peter Paige says of her measured response. “That’s just her challenge as a human being. I think it comes from the loss of her mother and being raised in foster homes, and I think that there’s a protective stance for her of like, ‘I could escape at any moment if I have to.'” 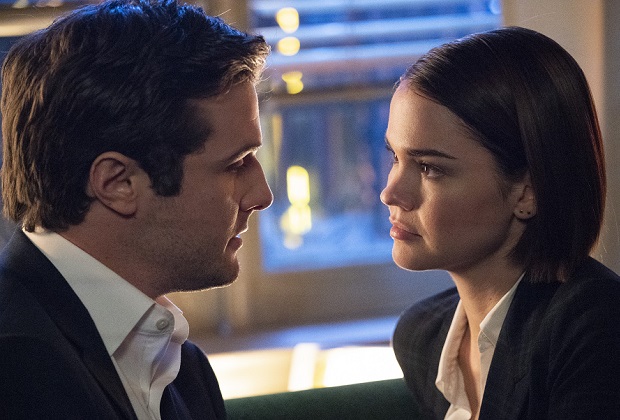 Paige also describes Callie as “a runner,” a quality that’s been inherent in her from the moment viewers first met her. “The very first episode of The Fosters, she runs away to go save her brother, but she runs away nevertheless,” Paige notes. “That is in her personality. So for her to be all in and fully committed to someone is a real challenge,” even if she does have genuine feelings.

With Callie still yet to make a final choice between sweet lawyer Jamie and passionate artist Gael, the latter fella might be moving on — or moving backwards. As glimpsed in the Season 2 trailer, next Tuesday’s episode will introduce viewers — and Callie — to Gael’s ex-boyfriend Elijah (played by Yellowstone‘s Denim Richards).

“Gael refers to Elijah as the only person he’s ever been in love with,” Paige previews. “Things ended messily for them. They were young, they were in college… There’s a lot of chemistry between those two. Really, really, really hot, really palpable chemistry.”

While actor Michael Galante was “fantastic” as Gael’s Season 1 boyfriend, “Bryan just wasn’t the guy for [him],” Paige adds. “[Gael] was never all in, and we needed a real formidable challenger for Gael’s affection, or else Callie was just going to walk all over him.”

Good Trouble fans, what did you think of the season opener? Grade it via the poll below, then hit the comments!