Oh, Luciana! By Season 5 of Fear the Walking Dead, she had to have known better than to say stuff like, “If we can crash a plane for someone, if we can almost die for someone, whatever comes next, how bad can it be?” Yet say it, she did in Sunday’s “Humbug’s Gulch.” And sure enough, by the end of the hour, we had an inkling of just how much worse what was coming next was going to be. What was the horrifying twist that ended the episode that marked the Fear TWD debut of TWD’s Dwight (Austin Amelio)? Read on… 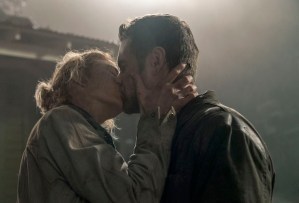 ‘WELCOME TO THE GULCH’ | As the Colman Domingo-directed installment began, Morgan, John and June cleared as many of the ghastly walker roadblocks as they could in hopes of going after Al and the kids. Working with Alicia, a still-recovering Lucy marked the locations of the groaning obstacles on a map and deduced that they were forming a perimeter. Soon, John and June had driven out of radio range. (Afterwards, Lordy, there was a lot of, “Morgan, can you hear me? Alicia, do you copy?”!) Before attempting to take down the next roadblock, John remarked that whoever was on the other side of ’em must be “serious people.” June, unfazed, replied, “We’re serious people.” (I love June.) As the couple started on their grody task, shots rang out, and with a dust storm kicking up, they were forced to seek shelter at Humbug’s Gulch, a Wild West attraction like the one at which John used to play Six-Gun Sam.

But John and June had no sooner made it through the brothel door than he was insisting that they wouldn’t get stuck in the dust storm and should just go. So off they went… only to be shot at anew; their attacker had caught up with them! After the guy shot out their tires and got winged by John, the mystery man got the drop on the sharpshooter. “Where is she?!?” cried the guy, who I suspect I hardly need tell you was Dwight. Quicker than you could say, “Behind you,” June had clocked him, and into the brothel they went. (It really should’ve had a revolving door.) Looking over Dwight’s notes from Sherry, John surmised that Dwight was “all worn down looking for this woman. Maybe he just cracked.” In any case, whee! They had someone they could help! 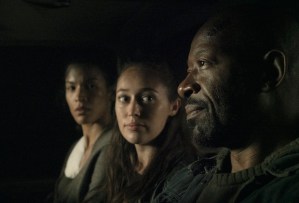 ‘THE WHOLE PLACE IS SCREWED’ | When Dwight awakened, it quickly became apparent that he was giving up. He told John and June that he had a car at the end of the street that they could take. Naturally, the do-gooders weren’t about to leave him behind. They’d get outta there, then they’d help him find… “I’m looking for my wife,” Dwight finally admitted. By and by, the trio escaped from the walkers that had surrounded the brothel by climbing out a window upstairs. In no time, Dwight had found another way to try to give up, by sacrificing himself so that John and June could get away. Only again, they wouldn’t let him do that. Eventually, they got thisclose to Dwight’s car, just for him to turn back and hop in John and June’s vehicle with the flat tires. When our heroes reached him over the radio, he explained that he’d shot at them initially because they’d been driving the last car Sherry had been in. Whenever she moved to a new spot, she left him a note; this car had no note in it.

For the longest time, Dwight told John and June, he’d thought he’d just been too far behind Sherry to catch up with her. “But now I’m finally starting to see it.” He didn’t deserve to be reunited with her, not after the things he’d done. Hell, he added, “I woulda killed you for nothin’.” Eventually, June tough-loved him out of suicide, and she and John shot the walkers off of his car so that he could leave with them. (John even took out two walkers with his last bullet by ricocheting it off an axe. “That was only the second time I ever pulled that off,” he marveled.) That night, John told Dwight that he’d made a discovery: The VIN didn’t match the registration on which Sherry’d written her last note. So maybe she left her message for Dwight in whatever car she really had driven. As their leg of the story reached a fork in the road, they were reunited with Morgan, Alicia and Lucy — and Morgan and Dwight were stunned to see such familiar faces. But more on that in a bit…

‘WE’RE ALL TRYING TO START OVER’ | After Alicia and Lucy managed to tune in Annie, Max and Dylan on their walkie-talkie, the women took off after the kids. How could they not after overhearing Annie tell Dylan he’d better hide, because “I can see them”? (OK, that was actually chilling.) En route to who knows where (they didn’t), Alicia radioed Morgan not to worry, this wasn’t about her bloodlust, she was just trying to do right… as her and Lucy’s car ran over a plank with nails sticking out of it and crashed. When Morgan caught up to them, he suggested that the kids probably still had their radios on, so Alicia should talk to them. Not only did she, she said what she wished she had before they split. That being: “I lost my mom… and my brother… and I know how much you’re hurting and scared, and it’s not because I’ve been there, it’s because I am there.” They didn’t have to go through it alone, she added. All they had to do was give the grownups a chance. In response, crickets.

By nightfall, the trio had met up with John and June at Humbug’s Gulch. When Morgan saw Dwight, he was stunned… and quick to prevent the former Savior from making excuses for his past behavior. They’d all done terrible things, Morgan said. And now they were all trying to atone. When Alicia asked Dwight about the roadblocks, he explained that he’d only been able to explore to a certain extent — there was one that was so big, it was impenetrable. “Not for long,” said Alicia as she stood in front of said obstacle. But before they could begin dismantling it, Max radioed that he and his sibs were on the way to the truck stop. The timing being so convenient, it smelled like a trap — and it turned out to be one. No sooner had Alicia told Morgan that at last, “it’s starting to feel like we’re on the right track” than they spotted the kids’ van. In it was a cowering, blood-spattered Dylan. From there, we cut to Annie and Max… adding more walkers to their roadblocks! “Think they bought it?” she asked her brother. “Definitely,” said Max, adding that he was sure Dylan wouldn’t crack. He’d find out why they were really hanging around and who took their friend, and then they’d never bother them again.

So, what did you think of “Humbug’s Gulch”? Does it feel strange to kinda like Dwight now? Were you surprised that it was the kids behind the walker blockades? Hit the comments.