The Netflix drama dropped its third and final season on Friday, bringing the streamer’s partnership with Marvel TV to an end. And when Season 3 begins, Jessica is trying to process a loss of her own: the recent death of her mother, Alisa Jones, at the hands of ex-BFF Trish Walker.

Before Alisa was shot and killed in the sophomore finale, she had tried to convince Jessica that being a hero is merely “giving a s—t and doing something about it.” That’s why, when we first see Jessica in the Season 3 premiere, she’s attempting to do a good deed: locating a young girl who has been taken out of the country by her father, who recently lost custody of her. Jessica successfully tracks down the man and his daughter in Mexico, but he’s not willing to bring the girl back to her mother — and when he threatens Jessica with physical violence, she tosses him across the beach like he’s an empty bottle headed for the recycling bin. (Unfortunately for Jessica, a random beachgoer catches the beatdown on camera, and she’s now gone viral.)

Suffice it to say, being a hero — or living up to her mom’s definition of it, at least — isn’t going so well for our girl. And she’s got other issues, too: She’s hired a new secretary at Alias Investigations who she seems to despise, and Jeri Hogarth (whose ALS symptoms are starting to worsen) practically begs Jessica to euthanize her with pills once the disease eventually gets out of control.

But the problem that takes up most of Jessica’s time in the premiere is Trish’s sudden disapperance. Trish’s mom, Dorothy, shows up at Alias Investigations, begging Jessica to find Trish now that she’s been missing for 24 hours. Jessica adamantly refuses at first — and it doesn’t help that Dorothy thinks Trish had “nothing to do” with the death of Jessica’s mother. 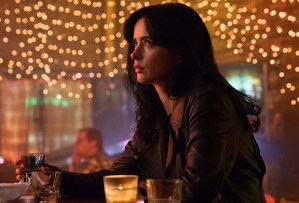 As you might expect, though, Trish’s whereabouts seem to weigh on Jessica, and she later agrees to help Dorothy find her. Not long into the investigation, Jessica discovers an apartment that Trish seemed to be using to spy on someone. “But what is she looking for? And who is she watching?” Jessica wonders. Later that night, she gets her answer: She watches from the window as Trish follows a man into his apartment building across the street, dressed like a burglar. Once inside the dude’s pad, though, Trish sets off the security alarm, and the man comes out into the kitchen to find Trish preparing to steal something from him. He opens a nearby cabinet and pulls out a gun — and just before he can shoot Trish with it, Jessica comes crashing through his apartment window, shielding Trish from the bullets until the man eventually leaves. (During the scuffle, Jessica discovers that Trish has powers, which comes as a very unpleasant surprise.)

Trish, however, isn’t all that grateful for Jessica’s help. When the man fled from his apartment after firing off a couple shots, he also took a sculpture from his cabinet that would have linked him to an assault, if Trish had been able to get her hands on it. But thanks to Jessica’s intervention, both the man and the sculpture are gone — and Trish says she wanted to set off the alarm in the apartment so that he’d reach for his gun and open the cabinet where the sculpture was stored. “I don’t need you to be a hero. Nobody does,” Trish informs Jessica. “I’ve got it covered.”

Later, Jessica goes to a bar and drinks away her Trish-related troubles. While there, she hits it off with a guy named Eric, and they soon return to Jessica’s apartment for dinner and, ahem, dessert. But just as things are getting hot and heavy between them, there’s a knock at Jessica’s door. She only answers it because it might be Vido, the son of Jessica’s neighbor and Season 2 flame, Oscar. (Speaking of which: What happened to Oscar? I know he’s on Manifest now, but I thought they’d be a real thing!)

When Jessica opens the door, though, it’s not Vido who greets her: It’s a masked man who stabs Jessica in the stomach, then runs out of the apartment building before she can fight back much. Jessica collapses to the floor, bleeding quite a bit, as her neighbor/estranged friend Malcolm calls the police.

With that, I hand it over to you. What did you think of Jessica Jones‘ Season 3 premiere? Grade the episode in our poll below, then drop a comment with your full reviews!