HBO’s Euphoria should come with a reverse parental warning: Anyone over the age of 30 is advised to watch it with a fainting couch and some smelling salts nearby. Boldly provocative and shockingly explicit, the new drama series offers an unflinching portrait of teen life today that’s teeming with graphic sex, drug use and violence. (This makes Riverdale look about as edgy as the squeaky-clean Archie comics it’s based on.) But Euphoria — debuting this Sunday at 10/9c; I’ve seen the first three episodes — isn’t just a superficial parade of bad behavior: It also looks deeply into these teenagers’ minds and souls, and tells their stories with an intoxicating visual style that pulsates with life. 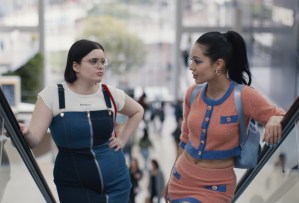 Zendaya stars as Rue, an anxiety-riddled teen who self-medicates with a dizzying array of drugs and ends up in rehab after an overdose lands her in a coma. After she emerges, she returns to a world populated with kid drug dealers pushing synthetic psychedelics, macho football bros and their vapid girlfriends, and peers who are constantly texting, vaping and f—king. These kids all seem to share a pre-apocalyptic fatalism — hey, the world is doomed anyway, so might as well YOLO, right? — and their blasé attitude towards rough sex and hard drugs is genuinely jaw-dropping. (When one girl learns her friend is a virgin, she snaps: “Bitch, this isn’t the ’80s! You need to catch a dick!”) But there is a glimmer of hope when Rue makes a connection with Jules (Hunter Schafer), a transgender student who just moved to town and offers Rue a rare commodity: authentic friendship.

None of this, of course, is exactly unique to today’s teens. Euphoria reminded me a lot of Larry Clark’s 1995 indie film Kids, another highly controversial chronicle of teen drug use and irresponsible behavior. (And don’t forget, free-love hippies were feared and vilified a generation before that, too.) But there is one key difference: Now the Internet has accelerated everything to warp speed, and these teens’ mistakes are being recorded and broadcast instantaneously online, where they can never be erased. It’s a life lived via text messages and dating apps, with smartphones always glowing within reach. Even the sex is more performative than pleasurable, with techniques gleaned from endless hours of studying Internet porn. 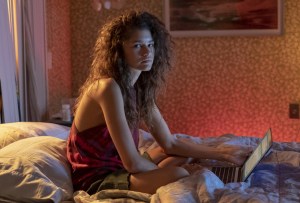 It’s a bleak story, but it’s confidently told by creator Sam Levinson (The Wizard of Lies) in a vividly colorful, fast-paced style that recalls ’90s drug-themed films like Trainspotting and Go. (He throws in winking asides along the way, too, like a tutorial on the proper etiquette of sending, um, a dick pic.) It all borders on sensory overload at times, but Levinson also takes the time to dig beneath the usual teen stereotypes and expose the complicated truth underneath. Zendaya is excellent as Rue, forcefully shaking off her Disney Channel past to give us a harrowing look at the blissful highs and terrifying lows of drug addiction. She narrates the show, too, and her wry commentary helps us make sense of this very confusing world.

Euphoria is admittedly better at establishing a distinctive mood and style than at telling a story, at least early on: The plot falls prey to a number of convenient “twists,” and the adult characters aren’t very well-developed at all… although that might be by design. (They basically function as the real-life equivalent of Charlie Brown’s “womp-womp-womp”-voiced teacher.) But Euphoria‘s exhilarating style and achingly incisive observations more than make up for any storytelling flaws it might have. We simply don’t get shows this vibrant and daring very often. It’s a bumpy ride through some very scary terrain, to be sure, but one well worth taking.

THE TVLINE BOTTOM LINE: HBO’s Euphoria is a genuinely shocking and stylish chronicle of teen life, but it offers real insight among all the gasps, too.