For a largely amelodic comedy, Younger has blessed us with a surprising number of musical moments over the past five seasons. And they’ve all led up to tonight’s premiere (TV Land, 10/9c), which sends Sutton Foster, Hilary Duff and Miriam Shor to Marie’s Crisis for a rousing performance of “9 to 5.”

“It’s just such a good song — the best song!” Shor tells TVLine. “That’s a song where you hear it once and you hear it forever.”

And Shor isn’t wrong. According to Duff, the Dolly Parton jam lingered on set for months, finding new life as an inside joke with the cast: “On long days, somebody will just start singing, ‘Tumble out of bed…’ and we’re all like, ‘No! Stop!'”

As for how it all came together, Foster recalls haphazardly pre-recording it “in someone’s trailer on the side of the road in the middle of Union Square” before acting it out in the bar. Adds Duff, “It was just me, Sutton and Miriam holding microphones and staring at each other. And I didn’t know all of the lyrics. But I knew the chorus!”

Fortunately, everything came together in the end, giving us the polished performance you can see in the video above. (In other musical news, Charles Michael Davis tells us that Foster and Shor recently sang “Part of Your World” from The Little Mermaid at his request while filming a scene in the conference room. Take a moment to imagine that.) 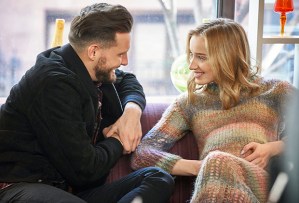 Of course, this musical number is just one exciting development awaiting fans in tonight’s premiere. TVLine spoke with the entire cast of Younger to find out what their characters are up to in Season 6:

* While Josh continues to reel from the news of Claire’s pregnancy, Maggie suggests that he might want to make sure he’s actually the father. “Because Maggie went to Ireland and attended the wedding, she’s seen Claire’s behavior,” Debi Mazar says. “They’ve been separated for months and haven’t been together, so why not get a paternity test?”

* “Frustrated” is the word Duff uses to describe how Kelsey’s feeling in her new position. “She’s always been strong, and you’ll definitely see moments of strength, but people at work — even the people who helped build her career — still aren’t taking her seriously.”

* “There’s less of Lauren’s personal life this season, but she gets really into Millennial, really into making Liza, Diana and Kelsey absolute viral sensations,” Molly Bernard says. “It’s kind of adorable that Lauren is in the office. I can actually take myself out of it and think, ‘Lauren is so cute.'”

What are your hopes for Younger‘s sixth season? Drop ’em in a comment below.