ABC this week added Card Sharks to its Wednesday  “Fun & Games” ♣. Do you ♥ this latest game show revival?

As always and forever, Card Sharks invites one of two contestants to guess the result of a survey of 100 people (e.g. how many veterinarians have performed a procedure on a human). The other player then predicts if the actual number will be HIGHER or LOWER than what was guessed. Whomever turns out to be right gets to play their previously shuffled-and-cut deck of giant playing cards, 10 of which are laid out across the playing board. The player in control may play their base card or change it (once), then proceed to guess if the card to the right will be higher or lower once overturned. (A duplicate card is considered a loss and not a “push,” as in some past versions.) At any point — such as when dealt a middle-of-the-road 7 or 8, ugh –, the player may “freeze” their hand, and host Joel McHale cues up the next survey-of-100 Q.

Here’s where things get a bit different…. 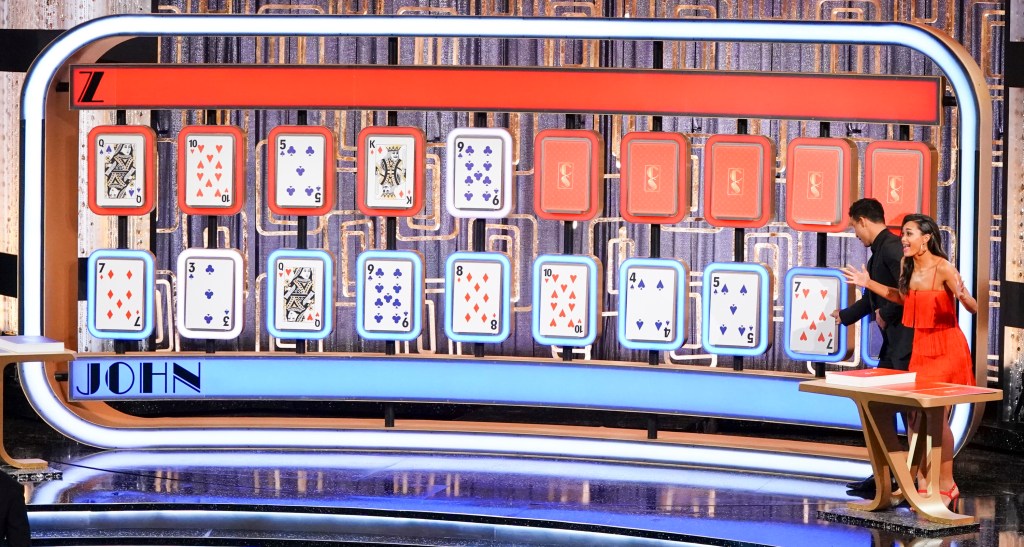 Whereas previous editions of Card Sharks made players work their way across just five cards (in a Best Out of 3 tournament), here they play one round of 10 cards. Also new, I believe: The correct answer to the final question lets that player decide if they themselves will attempt to guess all of their remaining cards and win $10,000 in success, or force their rival to attempt same. In the revival premiere’s first of two half-hour games, the player who was forced to guess all of his (many) remaining cards correctly in fact did, and so he advanced to the Money Cards round with a sweet $10K stake, while his rival was left with jaw on floor.

The Money Cards round is aesthetically different from the past (the turned cards are arranged in a straight line versus three tiers), but is basically the same in game play. The player must wager some of their bank (in the form of fun, oversized chips) on each higher/lower guess. When it comes to the final card, they can either walk away or bet at least half of what they have left.

As host, McHale is, well, aces. His advisory that any newcomers were tuning into a wild episode of Young Sheldon, due to the winner’s bow tie, made me howl. He also brings just the right hint of his trademark sardonic humor, such as when asking who’s ready to meet the contestants but not waiting even a quarter-second to get a single clap. (McHale was also admirably restrained when contestant John began draping himself all over “dealer” Jerry.) Speaking of the two dealers, you had to love how both Jerry and Alexis were duly, hands-over-mouth gobsmacked by John’s final winning streak.

Do you think the Card Sharks revival dealt a winning hand?