It is, more than ever, “game on” for ABC this Wednesday night, as the newly launched Press Your Luck revival leads into a new hand of Card Sharks and then the summertime run of Match Game (airing at 10/9c).

What’s behind this game show revival craze, aside from a need to help people recover from Daenerys Targaryen’s reign of terror? And does Match Game‘s host ever have private thoughts about the more, um, eclectic contestants? TVLine spoke with Alec Baldwin about those topics and others, including 30 Rock‘s psychic powers, why the [BLANK] his own wife is doing Match Game, and how his take on Trump is ultimately powerless.

TVLINE | As excited as I was for ABC to bring back Match Game years ago, I’m equally jazzed to be getting Card Sharks this week from Joel [McHale] and Press Your Luck with Elizabeth Banks. Why do you think game show revivals do as well as they do for ABC?
[Tongue planted semi-firmly in cheek…?] My career has been so groundbreaking, when you think about it. I mean, no one has done what I’ve done. I’ve done movies and Emmy Award-winning TV shows… I’ve been nominated for a Tony on Broadway… and then I fake everybody out and I go and host a game show. Everybody in the business — even Christian Bale, I bet — sat there and said, “You know, maybe I oughta be hosting a game show? Doing all these really important roles and Oscar-nominated films is so much work. Why don’t I go and just hit a bucket of golf balls like Alec Baldwin?”

No, I think that there’s such an incredible variety of programming these days, and some of those shows I love and watch are very dark, and very violent, and very traumatic. In a world where people want sweet and sour on the menu, game shows have enjoyed a resurgence. People just want to have some fun. They don’t want to stress too much about, “Which character’s head is the dragon going to bite off of in the next episode?”

TVLINE | There’s a steady influx of new celebs rotating in and out of the Match Game panel. Do you have any say in that?
I only have one rule, which is, “Don’t bring any of my brothers on the show.” That’s the critical rule here.

TVLINE | None. Ever.
None. Bring on people named Baldwin, but none of my three brothers.

But in all seriousness, we have great casting people and we have great returning people who I love and some of whom are dear friends, but we also have people who I get to learn about, people I don’t know. I don’t watch a lot of TV — I watch some — so I’ll say [to producers], “Who’s Bob so-and-so?” “Well, he’s in his fifth season of this white-hot comedy” that I’ve never heard of. This gives me a chance to learn about people who are out there in the whole constellation, and it’s been fun.

TVLINE | Is there anybody you’d like to have on the show? Personal friends or past co-stars?
All the usual suspects. We’d love to have some of the great comedy actors and actresses. Who wouldn’t want Julie Louis-Dreyfus and [Jerry] Seinfeld, Tina [Fey], Jimmy Fallon, Howard Stern… Bill Clinton? We have a whole list of people like that. But do you want to know something? We’re not missing anything. Everybody we have, we love. We’ve always had people on who are just blackbelt comics, like Adam Carolla, Ali Wentworth, Kenan Thompson, Joel McHale, Sherri Shepherd…. We have Wayne Newton coming on! We are not lacking. 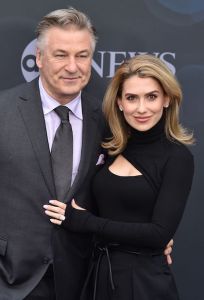 TVLINE | You do have a Baldwin coming up [next season] — your wife Hilaria. Whose idea was that?
We have four kids so we need all the money we can get our hands on. [Laughs] I tried to book my wife for all 12 shows — and my daughter Carmen, who I think would do well; she’s pretty funny. No, we were going to do a show with a bunch of my family — like my brother Billy’s wife Chynna [Phillips], and my brother Stephen’s daughters and so forth, and my daughter Ireland — but scheduling-wise it didn’t work out. But they stayed with the idea of bringing on Hilaria, and she is quick to do any show where really smart writers give her the opportunity to let the air out of me on TV. She can’t wait for that.

TVLINE | I mean, someone who “makes tiny foods”…?
Please come and write for the show. You need to come be with us. Where are you? New York?  We’ve got to get you out of TVLine and over here.

TVLINE | This seems to be a long way of you answering, “Yes.”
It’s such a funny thing, because when [the contestants] come around the corner, the way they present themselves when we first introduce them tells you everything you need to know about them. Some of them look like they’re in a seat with a taser in the cushion, and they’re hopping up and down like a robot. Some of them are so animated! And some of them are like, “Let’s ease our way into the craziness.” But you can tell so much about them when they come around that corner. 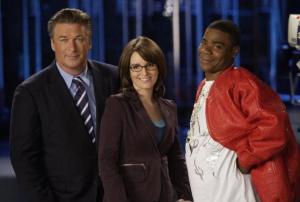 TVLINE | Do you have a favorite instance of 30 Rock predicting the future? For example, Tracy Jordan once filmed a political ad in which he claimed that Martin Luther King’s dream was to build a 200-foot wall between Mexico and the United States.
[Laughs] I still believe that Jack McBrayer is going to become the president of NBC one day. I still believe that prediction. They could use him.

TVLINE | At this moment — at 1:59 pm on Monday, June 10 — what is your current answer on doing more Trump for Saturday Night Live?
Lorne [Michaels] is my dear friend; if he wants me to continue, I probably will. I get sick of it and Iv’e whined about it regularly, because in the zeitgeist, I’m a pretty political person, and where I would normally put that energy is into voter registration, to work with MoveOn.org, to get involved in an actual candidacy which I used to do a lot of but stopped for a while. My wife and I have four little kids, so what I choose to do, I’m a bit precious with my time. But Lorne is my dear friend and that’s like another home to me, so if they want me to do it, I probably will. I’m just afraid that come the fall, I’m going to be very busy. 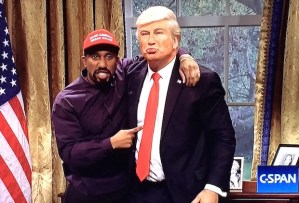 TVLINE | TVLine actually did an op-ed saying that maybe your time at SNL is up. That, at least the way they’re writing for you, they are not saying anything fresh anymore with the Trump character. Maybe it is time to turn it over to someone else, or drop it for a bit.
I do believe that their cold openings that don’t include Trump have been some of the best cold openings of the year. The thing is — and I don’t say this with any pride, or any crowing at all — that evvverywhere I go, people thank me. People say, “I love you doing that.” “It’s such a great thing for us to be able to make fun of this.” There are a lot of people out there who are still deeply disturbed by where we are [as a country] and I think probably there’s a right amount of it [to do on SNL], regardless of who is playing Trump.

But for me, I hate phrases like “move the needle” and so forth, because who knows what needle that is and what we’re trying to move. I’m not in the business of trying to leverage impeachment, though I have my own opinions about that. The thing that people keep reminding me is Saturday Night Live is a comedy show, it is an entertainment show. And Lorne has been political, Lorne has been acerbic, Lorne has buffed off the edges as it suits his purpose. He kind of feels what the public-at-large wants. He doesn’t want to appeal to just one half of the country, and I trust his judgement. If you’re really out to get Trump, if you’re somebody who wants to affect a change in the White House and get Trump out of office, well, you’ve got your work cut out for you next fall. You’ve got a whole path you can get into, registering people to vote…. 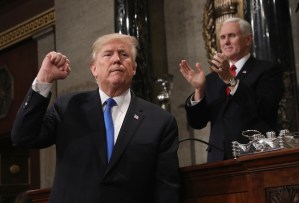 When Huffington Post writes something like, “Stephen Colbert Gives a Stinging Reply to Trump!,” they all talk about these things like they matter. Like John Oliver matters, and Colbert, Samantha Bee, all of them that are hyperpolitical, and I really don’t see any difference between them and SNL. You’re just helping people massage a type of bile gland they have, and it’s not really leading to any course of action. It just isn’t.

For me, I’m doing a comedy show with a bunch of old friends of mine, and when Lorne says to me, “I think we’re done” and the audience is sick of it, I would certainly take his advice. But in the meantime, for those people who want to change things in this country, there is only one way to do that — and that is to put their shoulder into a campaign next year and give it everything they’ve got.