Desna and her nail crew are ready to take a spin at being casino owners as Claws returns for Season 3… but did they all survive the premiere?

We pick up where we left off, with Virginia stepping in front of Desna and taking a bullet from a mystery shooter on a motorcycle. Desna rushes a badly wounded Virginia to the hospital, where Dean frets (in typical Dean fashion) that she has a “23.8 percent chance of dying.” Desna doesn’t know who tried to kill her, but she tasks Roller with finding out. Meanwhile, Jenn and Bryce are having trouble fitting in up in Tampa — a new friend advises Jenn to tone down her nails: “They’re just a little urban” — and Polly is happily playing dominos at a mental health facility. Plus, we see a mystery couple plotting against Desna inside the casino: a longhaired old dude and a younger blonde woman sucking on an oxygen mask. We say this a lot while watching Claws, but… WTF? 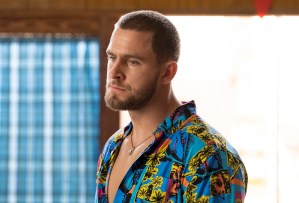 The doctors tell Desna that Virginia will be fine, but she did require a corneal transplant from, um, “an elderly reiki healer.” (Yeah, file that one away for later.) Roller confronts Clay, who’s now sleeping in the abandoned strip-mall Jewish center, but Clay insists he had nothing to do with the shooting. That bandana-clad jerk Clint, though, says that “karma’s a bitch.” (Hmmm.) Hearing about Virginia, Polly decides to escape the facility and go see her — but while she’s dangling several stories up from a rope made of tied-up bedsheets, a nurse informs her she’s in a voluntary facility and she can just walk out the front door anytime she wants. OK, then!

So that weird couple from the beginning? They’re Max and Melba Lovestone, co-owners of the casino, and they hand Desna a check for 50 grand to buy out her share… but she tells Ann, “They’re not getting rid of me this easy.” Roller tracks the Lovestones to a tent in the woods, where they’re torturing some poor woman with a white-hot poker. (Again: WTF?!) Virginia finally wakes up, and the girls present her with a bedazzled eye patch that makes her look “like a sexual pirate” — and Dean is seeking revenge on whoever shot her, grabbing Desna’s gun and dead-set on proving he can “protect his lady.” But Virginia blissfully tells him that “everything happens for a reason.” She’s acting all cosmically Zen with this new eye of hers. 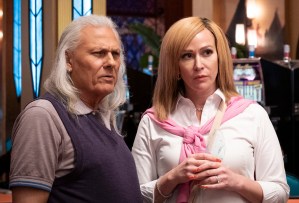 Desna and Roller find the woman the Lovestones were torturing, who turns out to be the accountant who handles all their money laundering. They really lowballed Desna with that check: They’re actually laundering $2 million each month from the casino. That makes Desna think they tried to kill her to cut her out, but Clay announces he knows who pulled the trigger: It was Clint, who didn’t like that Desna wouldn’t cut a deal with the Hussers. Clay’s boy toy Toby confirms it was Clint, and Roller gets some street justice by running over Clint with his car and dumping his dead body in the swamp. Problem solved, right?

Well, maybe not. Desna assembles her nail crew — including Virginia, who’s become a wisdom-dispensing sage since she got her new eye — to inform them she’s keeping her casino stake and needs their help in claiming what’s hers. She confronts the Lovestones about their money laundering and demands half of their monthly take to keep quiet, and when they refuse, she tells them she’s their new business partner, then… and the nail crew celebrates with a full-on dance number set to En Vogue’s “Free Your Mind.” (Never change, Claws.) But wait! There’s one final twist: We learn that it was actually Toby who took that shot at Desna… and Uncle Daddy is still nursing a grudge against her.

Alright, Claws fans, it’s your turn: Give the Season 3 premiere a grade in our poll, and hit the comments with your thoughts.