Animal Kingdom’s Smurf wasn’t nearly as excited as we were to see Emily Deschanel on her doorstep in Tuesday’s episode: She gave the Bones vet’s Angela 100 bucks for a fix and sent her on her merry way… which only led Julia’s old drug buddy to pull a U-ey and try, try again to get past the unwelcome mat, this time with Pope. How’d she convince Julia’s twin brother that she’d be as excellent an addition to the couch as a collection of throw pillows? Read on and find out…

‘HEY, YOU TRYING TO DIE, MAN?’ | Picking up pretty much where the Season 4 premiere left off, “Angela” began with the Codys splitting up the loot from the job on which Pope had tried to get himself killed by charging the police with his gun drawn. “We need to talk,” Craig told his older brother when they were alone. But of course, on a good day, Pope isn’t a big talker, and this was not a good day. If Craig wanted to tell the others what Pope had done, he didn’t give a s—; all he wanted was to practice punching and watch nature specials. Meanwhile, Smurf let J dictate the best way to launder the money; clearly, she was playing him. (Actually, her playing [insert anyone’s name here] is always a good guess.) The morning after, when Deran and Adrian weren’t trying to spark a debate among viewers about which of them has the shapelier tush, the latter rejected the dough that his boyfriend tried to give him for being his alibi. For their relationship to work, Adrian said, they had to be equals. Which meant that he’d be making money off his new “sponsorship,” not off the Codys’ thievery.

When J arrived at his bowling alley, a Detective Andre pounced with questions about the day that Morgan took her last swim. Why had J taken so many meetings with the lawyer? And why had camera footage put him at the harbor at the same time she was there? Rattled, J immediately asked Mia if anyone had spotted her when she’d rented him the boat. She didn’t think so, but “the harbor was crowded,” she added. “I’m not a ninja.” As if J’s day wasn’t already careening toward hell without the benefit of a hand basket, he next discovered a stranger chowing down with his feet up in his office. “This is Tupi, my foster brother,” Mia said. Upset at the prospect of even more people knowing about their clandestine relationship, J ordered his… I don’t even know what to call Mia, actually; “girlfriend” doesn’t feel right, does it? Anyway, he ordered her to stop letting her friends hang out at the bowling alley. 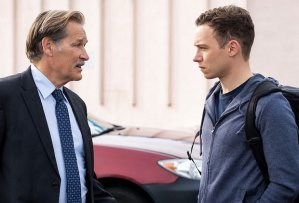 ‘EVERYTHING YOU DO IS FOR YOU’ | Later, at the bar, Deran and Craig talked freely about their last heist in front on Tim, a seashell vendor who was still passed out on the pool table from the night before. Having heard of playing possum, I might have been more cautious, but that’s just me. After Craig revealed how Pope had tried to turn the job into a suicide mission, he suggested that he and Deran needed to get their brother out of that house with Smurf. Maybe he needed a regular job? Deran almost laughed in Craig’s face. Dude, “he’s scary as s—,” he pointed out. And he’s a felon with a tendency to beat up people. What if Deran hired him, then… and “put him in the back or the kitchen or whatever?” Rather than offer in reply a sane, sensible “Oh hell no!” Deran agreed to consider the idea if Craig would help him move Tim out to the alley. Mm-hmm. This’ll go well, Deran.

But Pope certainly did need something to distract him from his rage and loss — and from Smurf’s mind games. After she called Craig to find out where he hid his oxy — she was having “lady troubles,” she said — she interrupted Pope’s workout just long enough to work him into a froth with her benevolent-mother routine. “What the hell have you given me?” he cried before paraphrasing The Bodyguard soundtrack. “Nothing! I have nothing! Nothing!” Next, Smurf went to work on J, revealing that Detective Andre had stopped by and suggesting that camera footage of her grandson at the harbor the day Morgan died wasn’t a big deal. “Unless of course you were both there at the same time,” she added. Oh, J was there at the same time? “And that was just a coincidence, right?” she said, knowing full well that the hook was lodged deeply in J’s lip. “Is this something I’m gonna need to fix?” Erm, could she pretty please? “Maybe,” she replied, “after I finish my laundry.” Bobby Fischer’s got nothing on Janine Cody! 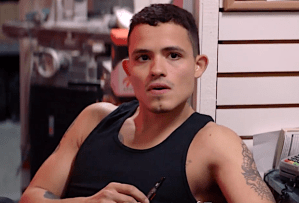 ‘THE STRONG, SILENT TYPE GETS OLD AFTER A WHILE’ | After telling Deran not to join him at the beach for practice, Adrian was caught by his beau talking to his supplier, Jack. Even worse, Livengood — the DEA agent who’s been on Adrian’s case — pressured him to reveal the full name of his “roommate.” Wanna bet by season’s end, Adrian will be asked to turn on the Codys to avoid prosecution? At the bowling alley, Mia tried to give Tupi the bum’s rush. Fine with him — they should just take the safe and split, he argued. But if he’d only be patient, she promised they’d score a much bigger haul; she just needed some time. Was that it? asked Tupi. Or was it that “maybe you like being some white boy’s whore”? Charming as always, Tupi. Elsewhere, Frankie slipped on an engagement ring to introduce “fiancé” Craig to, in her estimation, “an a–hole who pays people to steal things.” In their case, they’d get $800k if they swiped him a sculpture on which he’d been outbid at auction. Just one problem: The job would require more than the two of them to pull off…

Back at Casa Cody, Smurf told J that she’d made a phone call and solved his Morgan problem. “But I think you should consider this a warning… to keep me in the loop,” she purred, “because let’s just say, for instance, that you did kill Morgan. Maybe you didn’t want me to find out what happened to those missing properties that I assumed she stole, and the police find out before I do? Then what, J?” Game, set, match. “Stick with me, I’m proud of you,” she concluded. Also, “we need a new lawyer.” (Do I really need to mention that, in a subsequent scene, Smurf paid off the retired cop who’d scared the crap out of J? Didn’t think so. As he put it, “I’m sure glad you’re not my grandma!”) While Smurf was out, Angela rang the bell again and, upon being allowed past the gate by Pope, embraced him. And the poor thing… he wore an expression of shock that spoke volumes about how rarely he’d been shown tenderness in his life. Next thing we knew, it was nighttime, and the two of them were catching up poolside. She’d just done three years behind bars for B&E, was now clean and sober, and was crashing with her ex-stepfather. “I kinda wanna stab him,” she admitted. Oh, she and Pope have something in common (since when doesn’t he wanna bludgeon Smurf?). 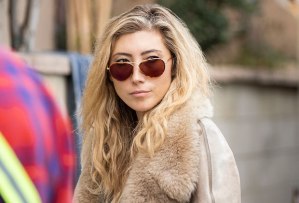 ‘YOU’RE HIS FAMILY, RIGHT?’ | At a beach party attended by all the Cody guys but Pope, Craig shared that he and Frankie had pulled a job — a solid one. “No guns, no bulls—,” he added. And as a matter of fact, she had a new job in mind. At that, Adrian bailed, perhaps giving Deran the idea that he was uncomfortable with his boyfriend’s criminal lifestyle but really more likely so that he didn’t overhear anything that might be used against the man he loves. Shortly, Tim — clearly one of the great thinkers of our time — had doused himself with tequila and allowed himself to be set on fire so that he could put out the flames in the ocean. Back at Casa Cody, Angela admitted to Pope that she’d come to the Codys’ in hopes of finding Julia. “She could always calm me down,” she said, adding, “You look even more like her now.”

When Smurf returned, she was chagrined to see Angela with Pope and super-chagrined to learn that he’d invited her to sleep on the couch. Still, Smurf (barely) hid her irritation and offered to order a pizza. Angela’s treat, said the houseguest, putting Smurf’s $100 bill on the counter. Later that night, as Angela dozed in the living room, Smurf collapsed in the hall. Had she taken too many oxy? And had she done so deliberately? In our 1970s flashbacks, Smurf deduced that Colin (Luke Harvey), not Jake, was more of a power player in their gang and first chance she got — when she and Colin disposed of their getaway car — swapped partners. “Where’d you do it?” asked Jake afterward. And even he knew that he wasn’t asking where they’d gotten rid of the car.

So, what did you think of Deschanel’s first episode? Does Angela have what it takes to beat Smurf at her own game? Does anyone? Hit the comments.