The lazy, hazy, crazy days of summer are nearly upon us, and they’re bringing a new season of So You Think You Can Dance with them.

Fox’s Little Reality Show That Could returned on Monday night for its 16th cycle, and it’s made a few changes during the off-season. For one, all of the auditions now take place in Hollywood, with the contestants now traveling to Los Angeles for tryouts instead of the show visiting different cities. (I can’t help but think that puts less-fortunate contestants at a disadvantage if they can’t afford to travel to California, no?)

Then there’s the audition stage, which is a newly constructed, in-the-round venue for hopefuls to perform on, complete with a raucous audience watching their tryouts. Plus, there’s more than 100 cameras embedded in the circular stage, which gives every audition a 360-degree, E!-Live-From-the-Red-Carpet vibe. Have you ever wanted to see a jeté from every angle? And in slow motion? Your wish is Fox’s command.

Some things are the same, of course: Longtime judges Nigel Lythgoe and Mary Murphy are back for another season, but they’re joined this time by newbies Laurieann Gibson (who’s choreographed for many a pop star) and Dominic “D-Trix” Sandoval (who competed on SYTYCD in Season 3). Frankly, this is already my favorite season, if only because the entire judging panel is made up of pros who know what they’re talking about. (I do still have nightmares about Jason Derulo’s non-critiques, thank you for asking.)

Monday’s season premiere didn’t waste much time (or any time, really) on bad or gimmicky auditions. Instead, the episode showcased five contestants who earned a ticket to the Academy, all of whom made at least one judge cry. And it was usually Dominic!

The only auditioner who walked away empty-handed on Monday was Amanda Butler, a mother of three who was joined by the all-female, moms-only hip-hop crew with whom she normally dances. Amanda’s skill level wasn’t quite high enough to score an Academy ticket, but her routine did give me a reason to rewatch the Season 14 group number set to RuPaul’s “Call Me Mother.” (As we all should do on a regular basis, frankly.)

Let’s break down the premiere’s five successful tryouts, ranked from weakest to strongest: 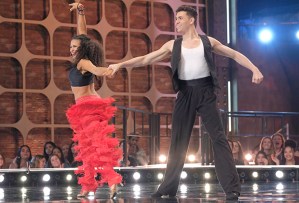 5 | Stephanie and Ezra Sosa (Ballroom) — Stephanie was a standout of last season’s auditions and Academy episodes, so I was thrilled to see her back, this time with brother Ezra in tow. Their jive, set to “Proud Mary,” was infectiously fun and sassy — though I was disappointed to see Stephanie’s energy flag the tiniest bit at the end, as Ezra was preparing to do one last trick off her back.

4 | Sarah “Smac” McCreanor (Jazz) — Mary Murphy aptly called Sarah the “Lucille Ball of dance,” and I got a distinct Emma Stone vibe from some of the faces she pulled, too. (Which is a compliment!) Sarah had a keen sense of timing, knowing just when to throw in a faux-sneeze or funny expression in tandem with the music. I do wish, though, that we’d seen a little more straight-up dancing, although the skills she showed off were no doubt impressive. If only the auditions still had a choreography round, we could have gotten a fuller picture of Sarah’s abilities — but alas, that seems to be gone for good, despite my attempts to wish it back into existence.

3 | Matthew Deloch (Contemporary) — Not even a torn meniscus could keep Matthew away from SYTYCD — nor would you ever know he had a previous injury if he hadn’t said something. Matthew seemed to pour all of himself into this routine, hitting crazy heights with his jetés and whirling through beautiful pirouettes with ease. It’s possible that Matthew could get lost in a sea of stunning contemporary dancers as the season continues — they’re not exactly unicorns on this show — but he certainly made an impression this time around.

2 | Gino Cosculluela (Contemporary) — This former Dance Moms star didn’t have the most inventive choreography in the world, but he more than made up for it with the pure, aching emotion he brought to every step of his audition. Performed to the bittersweet song “For All We Know,” Gino’s routine was full of such tenderness and sincerity, proving he can embody the mood and character of a dance as well as he can execute the steps. Assuming he survives the Academy, I’m really looking forward to seeing what else he can do. (Also, it’s probably a good thing for Gino that Maddie Ziegler is no longer on the judging panel.)

1 | Dezi Saenz (Hip-Hop) — Dezi looked mighty nervous in the moments leading up to Nigel’s “Cue music” — but once the routine began, this 18-year-old was a beast. Dezi used every part of her body as she popped and locked her way through the season’s first tryout, throwing in some insane chest isolations that even Terry Crews would envy. Of course, it’s always hard to tell if a hip-hop dancer can pull off other styles, so we’ll have to see how the Academy treats Dezi a few weeks from now. But after an audition this powerful, I suspect she could be the show’s next Comfort Fedoke or Jaja Vankova.

Which auditions from the SYTYCD premiere impressed you? Drop a comment below!