Sunday’s premiere of AMC’s NOS4A2, based on the novel by Stephen King’s son Joe Hill, wasted no time positioning as future adversaries aged-but-not-for-long kidnapper Charlie Manx (Zachary Quinto) and Vic McQueen (Ashleigh Cummings), the teenager whose emerging supernatural abilities connect them in a way that she doesn’t yet realize. But did the set-up make you want to come back to watch the follow-through? Before you weigh in, let’s sink our teeth a little more deeply into this first episode, shall we?

As “The Shorter Way” began, Charlie and henchman Mr. Ives abducted a youngster named Daniel Moore from his home in Here, Iowa. It was not a smooth operation. Though the former easily enticed the boy into his Rolls Royce Wraith with Christmas presents, the latter murdered the kid’s screaming mother on the front lawn and left behind one of the syringes with which he’d intended to subdue her. D’oh! Displeased, Charlie informed his guy Friday that his pattern of failure had earned him a spot on the (literal) naughty list. That being the case, he was tossed out of the moving car and left for roadkill well before the boss and Daniel were anywhere near their final destination, an imaginary Christmasland where unhappiness is against the law. 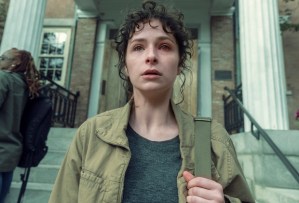 Meanwhile, in Haverhill, Mass., Vic was dealing with problems aplenty, too. Not throw-one’s-henchman-out-of-the-car sorts of problems, but arguably even heavier issues, like the fact that she’d never be able to afford to go to art school, and her alcoholic father (Girls’ Desi, Ebon Moss-Bachrach) didn’t just argue constantly with her housekeeper mother (Virginia Kull), he hit her, too. So Vic did a lot of motorcycling away, often through the woods and over a covered bridge that she’d soon discover wasn’t really there — it had been demolished years ago! What’s more, the bridge — the Shorter Way of the episode’s title — took her to whatever destination she desired. What’s even more, when Vic was on the bridge, it gave her a kind of otherworldly headache and caused Charlie’s car radio to spazz out. He seemed to understand the significance of the static, too. “Hello,” he said to himself. “Who do we have here?” The better attuned Vic was, it bears mentioning, the bigger a toll it took on her — think Stranger Things’ Jane and the way that she gets a nosebleed from a small job but can be left completely spent by a large one. 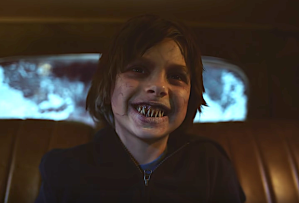 As the hour continued, Charlie grew younger and younger; Daniel, ever sicklier, almost zombified-looking. How old was the villain? asked the boy upon noticing Charlie’s wrinkles diminishing with each passing mile. “I’m as old as my nose,” he replied, “and even older than my teeth.” (You could’ve just said, “No comment,” dude.) When at last they rolled up on Christmasland, Charlie told his abductee that the other children would teach him how to play Scissors for the Drifter while he sped back down the St. Nick Parkway to run a new and newly pressing errand in — but of course — Haverhill, the town whose Shorter Way Bridge had just appeared out of nowhere on his map of supernatural hot spots (which included the Pennywise Circus and Lovecraft Keyhole). 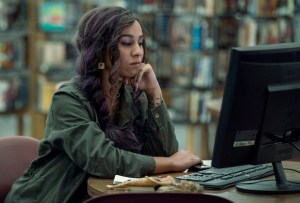 While all that was going on, back in Here, a punkily-attired clairvoyant named Maggie Leigh (Jahkara Smith, whose “Contouring 101” video on YouTube is the hilarious stuff of legend) tried to suss out Daniel’s location using the Scrabble tiles that had helped her crack a different case for the sheriff. As is required by TV law, he was not interested in receiving any more otherworldly assistance. Nonetheless, before Episode 1 was through, she knew that a Wraith was involved and that she could find it with the help of The Brat — which was what Vic’s dad affectionately called her even as he was admitting that he struck her mom and wouldn’t be giving up the vodka on which he blamed his behavior. Rather, he’d be moving in with his latest side piece — though he lacked the courage to say that to his daughter’s face.

So, what did you think of NOS4A2? Promising series or just a clever vanity license plate? Grade the premiere in the poll below, then hit the comments with your reviews.