NBC has invited you to make a new psychic friend, with the (long-delayed) premiere of The InBetween. Do you see… yourself continuing to tune in?

Cassie experiences visions — whether she likes it or not, though sometimes seemingly at will — of events that have previously occurred or will happen in the future. That ability occasionally makes her of use to Detective Hackett, such as with the show’s very first case involving a missing woman, which Hackett investigates with his new, psychic-skeptical partner, former FBI Agent Damien Asante (Training Day‘s Justin Cornwell). Cassie reaches out when she has a vision of what turns out to be a different woman, in a freezer on a beach, who has had her eyes carved out. There’s also a little boy looking on, while a man’s voice hums a song about Peter Rabbit. None of those clues jibe with the case at hand, until the missing woman turns up dead on a beach, with her eyes missing — and with a Peter Rabbit figurine in her pocket. 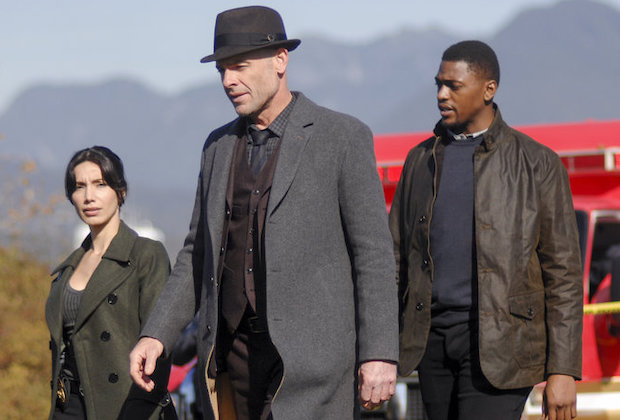 Cassie later has another vision — of being abducted while in a bath robe, by a man in a DNA-containing hazmat suit — and the cops eventually deduce that their victim was kidnapped the night before they originally thought, changing up the timeline. Asante then follows up in a ViCAP hit and watches video of deceased killer Ed Roven discussing a mother/son duo he allegedly locked inside a walk-in freezer.

When Cassie ID’s from a lineup of photos the young boy she saw, Asante realizes that the killer at hand is A) an Ed Roven copycat and B) the grown-up kid who had been locked in the freezer. After Hackett ID’s the suspect as a flatfoot he ran into at the beach crime scene, he and Asante track him down, blows are trades, shots are fired, and the cops get their man.

Cassie, meanwhile, also tends to encounter unsettled spirits who need her help. In the pilot, that’s Abigail, a young lass who was killed by her grandfather three years ago. Abigail now resents her parents’ new baby and speaks of using her ghostly powers to harm it. In the end, though, Abigail — with Cassie’s blessing of sorts — takes out her anger on her imprisoned grandfather.

But even with Abigail’s closure, Cassie is not left alone. Instead, at episode’s end we see her now being visited by the dead killer who inspired the copycat. Asante meanwhile is seen visiting a comatose woman he obviously is very close to.