What is the opposite of “Nailed it“?

Netflix on Tuesday evening promptly removed one of the thumbnails it has in rotation for the reality competition Nailed It!, after the questionable composition was brought to the attention of co-host Nicole Byer. 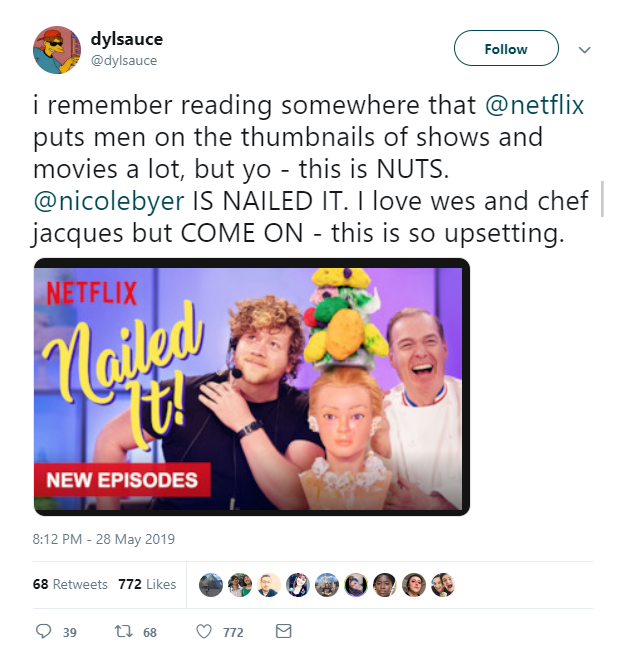 Said thumbnail (shown at right, in a since-deleted tweet grabbed by E! News) featured assistant director “Wes” (who sometimes appears on-camera) and co-host Jacques Torres. Netflix is known to run “A/B” tests of different thumbnail images on its homepage, tailored to specific customers/their established preferences or merely to offer a variety of visual cues. (The streamer has also been accused of changing the order in which episodes are arranged based on the viewer’s assumed sexual identity, but that’s a whole other hullabaloo.)

Byer at first responded with a series of tweets that questioned the thumbnail’s composition, saying, “If Netflix didn’t sign my checks and give me a huge platform and opportunity to showcase my comedy, I would talk about how… disrespectful this is to me a black woman [and] how black women are a lot of times erased from many different conversations…. I would talk about how it makes me know my true value as the host of the show where I work incredibly hard to elevate the material given to me…. I would talk about how this [is] essentially white washing for more views. But they sign my checks and I’m honestly so happy and grateful to and for the show and no sarcasm I love my job and wish to keep it so I’ll be quiet.”

Byer later removed those tweets after obtaining resolution to the perceived slight.

“I deleted my last set of tweets [because] I talked to one the execs on my show about it and the thrilling conclusion is the removal of the image and a conversation about how the thumbnails are made and selected that I’m happy with,” she wrote.

Have you ever taken particular notice of the talent featured in one of Netflix’s “A/B” thumbnail rotations to promote one of its offerings? Do you sometimes feel the streaming giant’s clever algorithms are trying a wee bit too hard?