Make no Bones about it: Emily Deschanel’s Animal Kingdom character has as much in common with Temperance Brennan as a cobra does a butterfly. “Angela’s a recovering addict who just got out of prison; she’s kind of at rock bottom,” the actress tells TVLine. But since Angela’s an old friend of Smurf’s late daughter Julia, “she has a history with the whole Cody family, so she’s hoping to manipulate her way into their home and infiltrate their lives.”

Something tells us she’s gonna manage. Here, the actress not only previews her arc on the addictive TNT drama (ahead of its Season 4 premiere Tuesday at 9/8c), she cops to her nervousness at returning to work after her post-Bones break and contemplates the possibility of reuniting with David Boreanaz for a standalone movie.

TVLINE | You use the words “infiltrate” and “manipulate” to describe Angela’s approach with the Codys. So clearly, even though she’s at rock bottom, she’s not helpless.
Right. I use those words because that’s how people will perceive it, but that’s not how Angela perceives it. She doesn’t even see herself as someone who is really conniving. I think she is a survivor and a hustler. She does what she needs to do in life to get by.

TVLINE | What’s her relationship with the Codys like coming in?
She needs them. She wants to be part of the family. Julia didn’t want anything to do with her mother. Angela feels that way, too, but she also sees an opportunity. So she has mixed feelings. She grew up with these guys and knows them. And since she has a dark side, she understands and can relate to them. 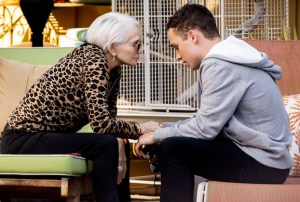 TVLINE | That can’t sit well with Smurf.
Yeah, she really is at odds with Smurf. There’s a territorial thing there. And Angela’s also looking out for J, who is Julia’s son and who she sees as sort of her own son or a nephew. But he doesn’t know if he can trust Angela. She doesn’t know who she can trust, either. So there’s a lot of trying to figure out where she stands with different people, a lot of different dynamics.

TVLINE | Were you looking particularly to do something very different after Bones, to kinda remind people, “Hey, I’m not just Brennan!”?
Yeah. I mean, not just to remind people that I don’t only play one character, but I wanted to stretch myself, and this show has definitely stretched me! There’s a place of discomfort for sure that I was not put in while I was doing Bones for 12 years. There’s something really cushy about doing a network show that you’re the lead of. They solve the case every episode, and there’s not an emotional…

TVLINE | Dangling?
Yeah! You’re kinda safe. You have your little cocoon, and you’re cushioned. So it hasn’t been a vacation working on the show, but hopefully it’s for good results.

TVLINE | What was it like not only going back to work but going back to work on something so different?
Challenging! I was nervous to go back to work. I hadn’t acted in two years besides doing a Drunk History! [Laughs] I wanted to go back to work, but you question whether you can do things again, and will you do a good job? You’re also walking onto someone else’s set. It’s not a new set to everybody, it’s an old set to a lot of them! Everyone’s been very welcoming, but you can’t help feeling like an outsider coming in. 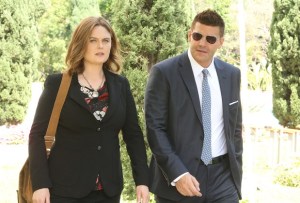 TVLINE | Finally, I’ve gotta ask: Has there been any talk of doing a Bones movie?
No talk that I’ve heard of, but I wouldn’t rule it out that people would talk about it. I don’t know if I would be open to it. I know David said he wouldn’t, because he doesn’t like to go backwards. I don’t have a hard-and-fast rule on that, so we’ll see.

TVLINE | Maybe it’s also too soon?
Yeah, it hasn’t been enough time [since the series wrapped] to explore that. But I certainly look back with so many fond memories. It’s a character I loved and people I loved doing [the show] with.