Sherlock and Joan’s life across the pond will be shaken up when Elementary returns for its seventh and final season this Thursday (CBS, 10/9c).

In addition to dealing with a serious case of homesickness and the baggage they left behind in New York City, the PI duo — who are now working as consultants for Scotland Yard -— will find themselves challenged by “their greatest foe to date” this season, per the network description.

Below, showrunner Rob Doherty previews the “life-altering decisions” ahead for the characters, as well as Sherlock and Joan’s new frenemy.

TVLINE | You knew going into Season 7 that it would be the final one. How did that shape the story that you were telling this year?
We knew going into the season that all bets were off and we could make big moves with our core cast. We made a pretty big move in the first episode. As we approach the final handful of episodes, that’s when we looked at moves we typically wouldn’t make, life-altering decisions for the various characters, but especially Sherlock and Joan. In Joan’s case, there were things that I wanted to see her accomplish, personally, in different seasons that were too challenging to pull off at that time, but felt appropriate to a final batch of episodes.

TVLINE | The premiere picks up one year later. How has life changed for the characters in the time that has passed?
[Sherlock and Joan] are working with law enforcement in the UK. They have found the British equivalent of Captain Gregson in a DCI by the name of Athelney Jones. That’s a name that will probably be familiar to people who are knowledgable when it comes to the canon. Athelney Jones was an investigator that the original Holmes and Watson worked with in the stories and books. For Sherlock, it’s a homecoming — for lots of reasons. In any iteration of Sherlock Holmes, he’s of that place. He personifies London in a way. So for him, the transition’s been relatively simply and certainly made easier by Joan’s decision to join him there. I think when he chose to accept the blame for what happened to Michael Rowan, he was ready to go it alone in London. And then Joan made a decision that allowed them to be partners again. So he’s really gotten the best of both worlds. For Joan, understandably, it’s more of a challenge. She’s certainly a worldly person, but has never really spent meaningful time outside of New York. In the same way Sherlock is of London, Joan is of New York. And so there’s more of a learning curve for her. There’s been a greater adjustment period. So as we catch up with them a year later, we’re going to take some time to see what’s the same for them as partners and flatmates, and what’s different.

TVLINE | Joan has also possibly made a bit of a sacrifice by giving up on the idea of adopting and starting a family. How is that going to impact her this season? Is that something she might change her mind about?
It’s something that we will speak to in the first episode. It was exciting for us to put her on that path in the sixth season, but that season ended with a very close call with Michael Rowan. He nearly killed her in her home. We’ll talk about that in the premiere, and we’ll show that it is informing her thinking about whether or not to pursue starting a family again. 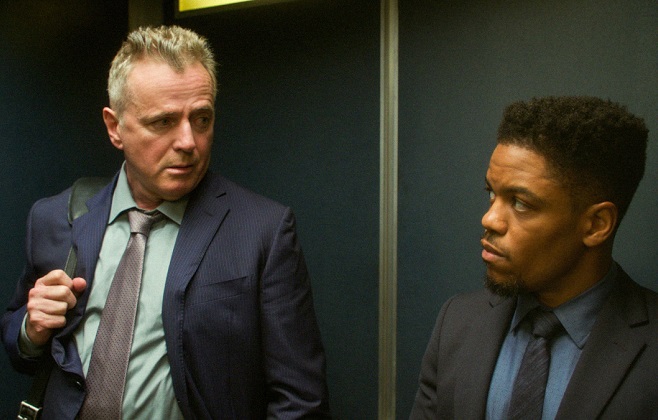 TVLINE | How are things back home with Gregson and Bell?
It’s been a much more difficult time for them in that they’re both sitting on a tremendous secret, which is: The captain’s daughter killed Michael Rowan and allowed Joan to become a suspect. Captain Gregson was a party to the cover-up, and Marcus knows this. There’s been a healthy amount of stress on their relationship. For Gregson, it’s a lot harder because things ended so badly between him and Sherlock at the end of Season 6. As a staff, that’s one of the things we looked forward to tackling with this pleasant surprise of a seventh season. We loved the way Season 6 ended, and yet it hurt us to leave Sherlock and Gregson on such unfriendly terms. In this first episode, we will spend some time in New York, [and] we will see where Marcus and Gregson are in their lives. But like I said, there’s a pretty big elephant in the room for the two of them.

TVLINE | There’s a new foe this year. What is he like? What is his agenda?
Eventually, Sherlock and Joan will meet a new character by the name of Odin Reichenbach, played by James Frain, who is someone we’ve wanted to see on the show for a very long time. He’s fantastic, the actor. The character is a tech mogul with billions of dollars at his disposal. He runs his empire from a perch in New York City, which is where he crosses paths with Sherlock and Joan. He reaches out to them for some help with a case. They’re only too happy to oblige, given that Odin has access to data and information not just in New York, but across the country and around the world. So he seems like a very good friend for two detectives to have. But like a lot of billionaire tech moguls, he’s a very complicated person. As Sherlock and Joan grow closer to him, they realize there’s a lot to unravel about the way he wields his power.

Elementary fans, what are you looking forward to in the final season? Hit the comments with your thoughts!