I can barely type through my misty eyes.

CBS’ NCIS with Tuesday night’s Season 16 finale spun an already compelling story in which Fornell’s daughter, Emily, was revealed to be battling an opioid habit. Her near brush with death led Fornell to challenge Gibbs to hunt down her dealer and bring him to justice, no matter what. That task was echoed by visions of Diane (played again by Melinda McGraw) that Gibbs’ dealt/squabbled with through much of the hour.

In the end, Fornell got an ever obstinate Emily to admit that she needed help and accept her father’s nurturing embrace. Gibbs and his team, meanwhile, tracked down and leaned on the sketchy pharmacist who was funneling grey-market opioids from Canada.

Gibbs then retreated to his basement, where Diane observed that what he has been going through, as the result of burning Rule 10, is all because the walls he erected after losing his family are starting to come down. And that’s scary for someone like Gibbs. Diane then bid her ex adieu, assuring him that when times get rough, “we are all inside you” to help. 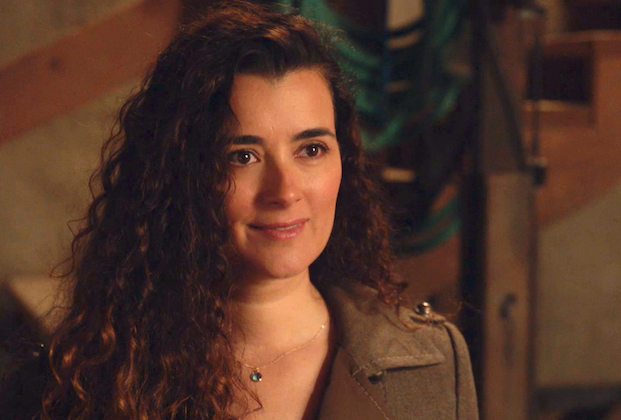 Gibbs wasn’t alone in the basement for long, though. Because no sooner had the vision of Diane left than who comes bounding down the stairs but… ZIVA FRICKIN’ DAVID.

No CGI’d archival footage, no retrofitted flashback. No, Cote de Pablo was there, in the flesh.

“Hello, Gibbs. No time for pleasantries — you’re in danger,” Ziva said as she arrived. “Well, aren’t you gonna say something?”

“Ziva” is all Gibbs could say, his mouth letting slip a faint smile.

Is Ziva really back, alive and well? Or is this further demonstration of Gibbs’ fractured psyche? Get scoop on how they pulled off this surprise, and whether Ziva will be a part of next season.

When TVLine asked the NCIS bosses about the intermittent Ziva teases throughout the back half of Season 16, Steve Binder said, “It’s such a great thread, I’d hate to leave it on the table. But like anything, we don’t just want to tease the tease. If we do pull at it, we’re going to have something interesting behind it, and not just keep doing the same beat over and over again.”

“I don’t want to say ‘the sky’s the limit,’ but given that she’s been gone for years, there’s a lot that could have happened that could be fodder for us,” he added, “even if she’s not necessarily present.”

“We’re always trying to think about what the audience wants to see, what we want to see, what makes sense, what’s interesting…,” Binder continued. “We’re talking about all of it, all of the time. And we’ll see what sticks.”

Did that utterly shocking Ziva/Cote de Pablo appearance “stick” for you?