For the Legends of Tomorrow to survive their latest season-ending showdown, a sacrifice had to be made. But the team member who volunteered to give their own life wound up not being the one to go.

Instead, the Legends sustained a different loss.

Constantine and Nora (in Fairy Godmother mode) traveled to Hell, where they enlisted a shady Astra to break into Neron’s vault and procure the coin that represents Ray’s soul. But to reunite Ray’s soul — currently in the midst of a Giant Jenga match with Vandal Savage (!) — with his body, Nate would need to die, tethered as he is to the deal his BFF made.

Meanwhile, as part of a mission to stop the world from fearing magical creatures, the Legends built the HeyWorld theme park that Hank had envisioned, then ran a commercial (starring “Supergirl,” “Green Arrow” and “The Flash”) inviting the masses to visit the happiest place on the globe.

Once a crowd congregated at the insta-attraction, Sara and Nate put on a stage show that was designed to establish harmony between humans and magical creatures. But then Tabitha showed up, with Wickstible — the grown-up dragon hatched from the egg — in tow, hoping to stoke and absorb the crowd’s fear. Luckily, Young Zari was able to stop Wickstible from wreaking havoc and start dancing (swatting Tabitha for good measure). Constantine then went toe-to-toe with Neron, who started to open the gates of Hell, but wound up bested when the demon choked him to death. 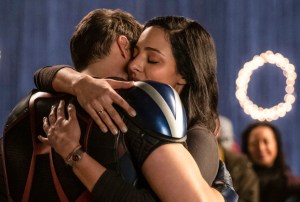 That was not Constantine, however, but a glamoured Nate — who, with his death at Neron’s hand, allowed Ray to be freed. After John vanquished Neron, Zari led the crowd in a “Kumbaya”-like sing-along of James Taylor’s “Sweet Baby James,” to rid the arena of all fear and replace it with love, resulting in Nate’s resurrection.

The Legends’ success in teaching tolerance, however, came with an anticipated side effect. The Anti-Metahuman Act of 2029 was never enacted and Zari’s brother Behrad never was killed by ARGUS. Meaning, the Legends never met Zari, let alone recruited her. As such, soon after welcoming Nate back to life with a warm embrace, Zari simply vanished (replaced in the hug by her brother), leaving Nate with no memory of knowing her but a sense that something was “missing.”

Astra, meanwhile, was seen rounding up the soul coins for some of Hell’s most notorious cretins a la Genghis Khan, Joseph Stalin and Charles Manson, for her own nefarious, future purpose….

TVLine emailed Legends showrunner Phil Klemmer about Tala Ashe’s status with the CW series, what the crossovers’ Monitor was up to during his cameo, and more. Here are his answers.

TVLINE | Has Tala Ashe left the show/series regular status? Or is the story now about Nate re-finding Zari?
Tala will be returning to the show but Zari, the character we know and love, will not be. Nate is welcome to go look for her next season, but he will not be pleased by what he finds. 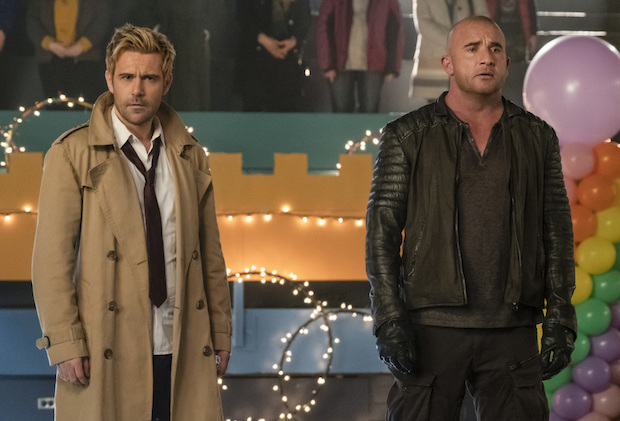 TVLINE | The “Sweet Baby James” sing-along was remarkably touching. Did any cast member beg off having to sing?
No. And I owe a huge debt of gratitude to Dominic Purcell for singing live on the day [of shooting], without any rehearsal or any heads-up that he would have to sing. What can I say, the man is a consummate pro and an utterly fearless performer. And somehow his singing is perfectly Mick Rory — a little rough around the edges but pure heart. A second shout-out to Tala Ashe who sang her part live. Normally in TV, you prerecord in a studio and lip synch back to the track, but Tala belted that one out the old-fashioned way. Our composer Daniel also did a beautiful job of transitioning from the live sing-along to the epic, scored version of the song. I know I’m a softy, but it still gives me chills.

TVLINE | Which costs more to bring to life — a baby dragon or a Beebo?
The sad part is that a baby dragon costs as much as a grown-up dragon; it seems like there should be a size discount. That said, our VFX company Zoic did a bang-up job. I refuse to compare Beebo and Wickstible in terms of cost or who we love more, however. I don’t want to create any additional jealousy between them. I think Beebo felt a little upstaged when he saw that he wasn’t in the script this year.

TVLINE | What are we calling the group of epic sinners that Astra has rounded up? Will they be Season 5’s Big Bads, scampering through time?
At the moment in the room prior to the breaking of Season 5 we are calling the historical baddies that Astra resurrects to wreak havoc throughout history “Encores.” It’s easier to say that either aberrations or anachronisms or “mythsteries,” so that’s nice. And no, they’re not the Big Bads, they are the episodic bads. I can promise that next year’s big bad will be nothing demon-related. 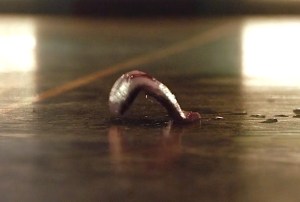 TVLINE | Will Season 5 be a biiiiit more grounded/serious than the magical creatures/squirming nipples?
I sense that there is a request for more groundedness in this question, so please don’t think that you’re just getting your way when I say “yes, Season 5 will be a bit more grounded.” More history, more growing up, more legit character stuff for the Legends in Season 5. What can I say? When you start the season with a murderous unicorn at Woodstock that secretes hallucinogenic goo, you’re bound to end up someplace wacky 15 episodes later. The original pages for the scene between Nate and his father sharing a moment in the afterlife included Jimi Hendrix, Janis Joplin and Jerry Garcia joining in the sing-along. So it coulda been wackier…. 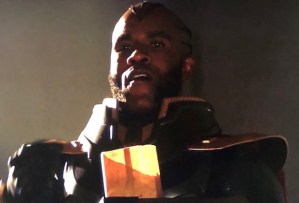 TVLINE | What was The Monitor from the crossovers up to there in the stands, besides inhaling popcorn? Was he “taking notice” of the Legends and their skill sets?
I would say that the Monitor was taking notice of the Legends’ lack of skill sets. And yet somehow we got invited to participate in the [“Crisis on Infinite Earths”] crossover next season. Weird.

TVLINE | What else is on your to-do list for Season 5?
Make ‘em laugh, make ‘em cry, make ‘em give us a Season 6. And we promise no more squirming nipples.