Game of Thrones certainly had its share of smooth-operating schemers across eight seasons, from Littlefinger (RIP) to Varys (RIP). But in the series finale, a surprising name made a last-minute bid to be considered the show’s biggest manipulator of all: Tyrion Lannister.

Tyrion has been one of GoT‘s central heroes from the start, but viewed through a cynical lens, his actions in “The Iron Throne” are actually quite self-serving… and, admittedly, quite effective. Think about it: At the start of the episode, he’s facing almost certain death for betraying Daenerys — his latest of many blunders, to be honest — but using only his wits, he manages to not only get his threat neutralized, but to talk his way into a cushy position at the head of the new king’s small council. Littlefinger wishes he could be that sneaky!

Dany throws Tyrion in prison for treason (which, to be fair, he was absolutely guilty of), and Jon Snow comes to visit him in his cell. Here’s where Tyrion’s ingenious plan begins: Even though Jon is in love with Dany and has pledged his loyalty to her, Tyrion uses a whole bunch of words to convince him that (a) Daenerys is evil and cannot be reasoned with, and (b) if Jon doesn’t stop her, she will kill him and his beloved sisters. Tyrion masterfully frames the debate as one with only one answer: Jon should kill Dany, and Jon must kill Dany. Jon is a pretty susceptible guy — another smart calculation by Tyrion — and so Tyrion’s speech gets him to push aside his love for Dany… and push a dagger into her ribs. Step one of Tyrion’s plan: done. 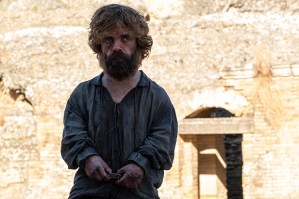 Now just because Dany’s dead doesn’t mean Tyrion is in the clear. In fact, he’s still in prison when he’s brought by Grey Worm before a collection of lords and ladies, who are trying to decide who should rule the realm in Dany’s absence. Tyrion — in chains, mind you — spins another mesmerizing yarn, this time about how Bran the Broken is the best choice to be king. He decides: “From now on, rulers will not be born, they will be chosen on this spot by the lords and ladies of Westeros, to serve the realm.” But he’s a prisoner! How is he getting to decide this? People seem to like the idea, though, and they not only say yes, but they just nod when Bran chooses as his Hand… Tyrion! (Grey Worm doesn’t much like it, but he doesn’t get a vote. He’s not a lord!)

So when Game of Thrones concludes, Tyrion is living the high life, leading a meeting of King Bran’s small council and cracking jokes about jackasses and honeycombs. What?! This guy should be dead! But somehow, his gift of gab took him from imminent execution to becoming the most trusted advisor of the most powerful person in Westeros. It might not be as good a story as Bran’s… but it’s a pretty good one. Enjoy another glass of wine, Tyrion. You’ve certainly earned it.