We’re in the home stretch, folks. Now that Season 16 of The Voice has at last separated the Talon Cardons from the Maelyn Jarmons, the Jacob Maxwells from the Dexter Robertses — and eliminated Adam Levine’s entire team — it’s all down to Monday’s final performances by the Top 4 (NBC, 8/7c) and the reveal of the winner on Tuesday (9/8c). Which vocalist is likeliest to walk away with the title? Let’s evaluate their chances…

Maelyn Jarmon (Team John Legend) | Since not once over the course of the season did this 26-year-old New Yorker hit a bum note, it’s not really even a contest in my mind. Of course she should be named the victor. She’s a freaking goddess, a muse. And based on how she’s fared in TVLine’s post-recap polls, most of you would agree she’s the top of the heap. Chances of winning: 60 percent.

Dexter Roberts (Team Blake Shelton) | This 27-year-old Alabaman entered the contest with a built-in fan base, thanks to his stint on American Idol during its 13th season. (He finished seventh.) But even if he hadn’t, he’d still have emerged as the strongest of his coach’s country boys. And that country vote can’t be underestimated. (See also: Season 15’s Chevel Shepherd’s triumph over Kennedy Holmes.) Chances of winning: 25 percent.

Andrew Sevener (Team Blake) | Andrew’s coach has described him as “country to the core.” Vocally, I’d add that he’s generally as solid as the broad side of a barn. Trouble is, he hasn’t always howled enough on his numbers to really make viewers roar. And, since he’s the only one of the Final Four to have had to sing for an Instant Save, it suggests that his fan base is the smallest. Hate to say it, but… Chances of winning: 10 percent. 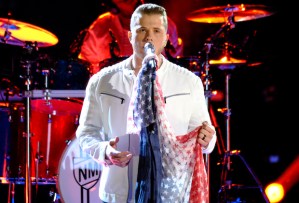 Gyth Rigdon (Team Blake) | Frankly, this slot should’ve gone to Team Legend’s Shawn Sounds, a (vastly!) superior vocalist and far better showman. Two of the coaches even admitted that the buff Louisiana boy’s “God Bless the USA” in the Semifinals hadn’t been as polished as it was patriotic — and criticism is as rare on The Voice as a unicorn. He’s not awful, mind you; he just can’t hold a candle to Dexter or Andrew, much less Maelyn. Chances of winning: 5 percent.

Which of the Top 4 do you think will win? And which of them do you want to win? Vote in the polls below, then hit the comments.